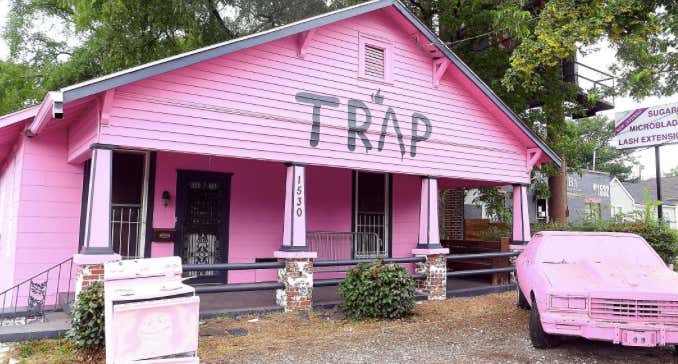 Source - 2 Chainz may be one of hip-hop’s biggest philanthropists, but he’s always doing it in style with unique ideas on how to give back. That’s what he’s now continuing with his very popular Pink Trap House in Atlanta. Today (July 4), the hometown rapper’s transforming the space into a temporary site for free HIV testing.

This comes after the man formerly known as Tity Boi, used the Pink Trap House as a Trap Church for a service. “I appreciate 2 Chainz and the whole team for putting this house up because in a lot of respects it’s reminding people that this is a real thing in our city,” Pastor Michael Wortham told local station Fox 5 Atlanta on Sunday. “So people come and take pictures, put it up on Instagram and walk away, but there are a lot of people who aren’t able to walk away from this daily reality.”

The trap is lit! Hopefully more great things can be utilized by this space. Check out some Instagram photos and video of the Pink Trap House below.

It’s nice to see Tity Boi giving back to the community. It’s not his first time either, he has a history of giving back. Like that time he raised 2.5 million dollars for families in need through a  “Dabbin Santa” sweaters sale. Funny thing is I bet the old neighbors weren’t too happy when Snoop Dogg-light moved next door. Probably scoffed at the thought of a rundown pink house with the word “TRAP” scrawled across the front. What jerks. If they only knew trap houses are like caterpillars. They start as a drug fueled crack dens and blossom into churches and HIV testing facilities. Everyone knows that.

2 Chainz is the ultimate don’t judge a book by its cover. He’ll rap about putting fat rabbit’s on the Craftmatic then go on Nancy Grace and put her in a mental pretzel over marijuana laws. God I hate her.

Southern rappers take a lot of shit now a days. Mostly because they rap sounds, not words. Which is fine, I guess. I like a Migos banger as much as the next guy, although it is nice to have audible lyrics from time to time. Regardless, it’s hard to talk shit about a guy who does as much for the community as 2 Chainz.