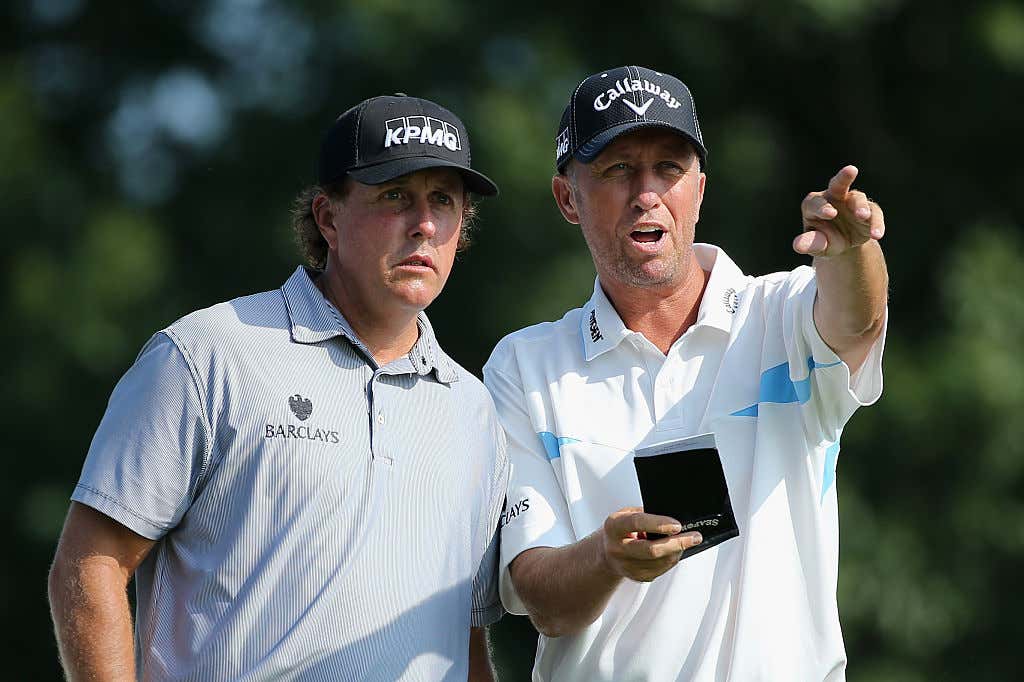 Golf Channel — After 25 years on the bag, Jim “Bones” Mackay is ready to pick up a microphone.

Weeks after announcing his mutual split from Phil Mickelson, Mackay has signed a multi-year deal to become an on-course reporter for Golf Channel and NBC Sports. His first assignment will be later this month covering The Open at Royal Birkdale.

“During my years as a caddie, I had the opportunity to watch Tommy Roy work his magic in the production truck, and walk the fairways with Notah Begay, Roger Maltbie and Mark Rolfing,” Mackay said. “To join them and be a part of the coverage of some of golf’s biggest events – starting with The Open – is an opportunity I’m grateful for, and I’m eager to add my take to help illustrate the strategic decisions golfers face inside the ropes.”

Wowwww. HUGE snag for Golf Channel. It’s all starting to make sense now. Full picture’s being painted. When Phil and Bones announced their split a few weeks back, it was shocking. Stunning. Weird as fuck. Why would these two BOYS split ways after 25 years for no apparent reason? After no clear incident? What’s going on? Is Bones pissed at Phil for missing the U.S. Open? Did Bones request to caddy for someone else, a la the Stevie Williams/Tiger Woods/Adam Scott? Who’s kissing who? Who’s pissing on my head and telling me it’s raining? Bones had looped for Phil for 25 years. There for the ups, the downs, the Winged Foots, the green jackets, the Claret Jug. Was tight with the family; was there supporting Amy Mickelson when she was diagnosed with breast cancer. Phil and Bones were the tightest, closest, most successful duo in modern golf (sure, Tiger and Stevie won more, but Phil and Bones projected that vibe of being best dudes on and off the course).

So why’d they split? The announcement came as a shock — this pieces the puzzle back together a bit. Bones’ knees are shot. He had both replaced in the fall. Not sure how those puppies will hold up carrying the bag all over god’s green earth, but on-course reporting? Should be able to handle that. Phil’s playing consistently well but he hasn’t won since The Open in 2013. He’s got one last little stretch and he wants to share that stretch with his brother on the bag. This isn’t unprecedented; Jack Nicklaus’ son was famously on his bag for the historic 1986 Masters win at age 46.

The reaction to Bones now being a reporter? Phenomenal. He’s an incredibly down-to-earth, insightful, smart dude who brings — obviously — an arsenal of first-hand knowledge and experience. He’s been there. He’s talked through shots with the best. He’s felt the emotions of both succeeding and failing under pressure. The Masters. U.S. Opens. PGA Championships. Ryder Cups. Presidents Cups. He’s been a part of it all. He’s got stories for days. He knows the courses. He knows the players. He knows the caddies.

It’s a no-brainer for Golf Channel and for Bones. Golf as a whole wins today. Awesome signing.