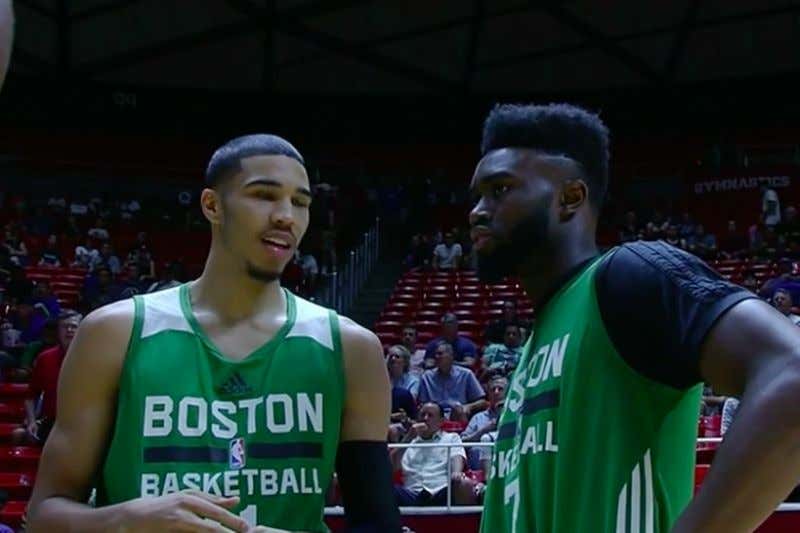 With all the drama this weekend swirling around the newest member of the Boston Celtics Gordon Hayward, it’s quite possible that while you were outside enjoying the beautiful summer weather, you missed the fact that a title defense also got underway. That’s right, the Celtics hit the court on Monday to defend their Utah Summer League title and they did so in dramatic fashion. Now there are sure to be some basketball hardos who come with the “THIS IS SUMMER LEAGUE WHO CARES NONE OF IT MATTERS” takes, but those people are morons. What’s unique about Summer League is that it by no means guarantees who is going to be legit once the real basketball starts, but it does lets you know right away who DOESN’T belong. Also it’s a false statement that things don’t translate into the regular season either. For example, Jaylen’s turnaround fadeaway we saw last summer sure as hell did, as well as Marcus Smart’s ability to block transition baskets. I also think what Bam is doing for MIA is legit as hell down in Orlando, so I wouldn’t say these games are absolutely useless.

But this matchup on Monday was something special, it was our chance to see Jayson Tatum vs Markelle Fultz. Both fan bases were armed and ready to gloat how much better their 19 year old prospect is than the other team, and with so much drama around Ainge’s decision to trade down, there was a little added pressure on Tatum. Well, as you’ll see, things appeared to work out.

– The coaches didn’t really want him to, Ainge was skeptical, but goddamit Jaylen Brown DEMANDED that he be allowed to play in the Summer League and it took all of 5 seconds for everyone to realize he is simply too good for it. A man amongst men who did whatever he wanted whether it was attack the rim, drain threes in eyeballs, Jaylen showed us what all those YouTube workout episodes are doing. As is the rule during the regular season, the same applies in the summer. We enjoy this performance uninterrupted.

Right off the bat, the outside shooting is what stood out to me. Going 3-4 from deep, some really fucking deep, shows us Jaylen has been putting in the work to take his shooting to the next level. After a decent shooting rookie season (especially from the corners), Jaylen is going to really have to be a consistent shooter/scorer for this team if they are going to be moving guys like Avery/Jae/etc. Remember how worried we all were on Draft night that he wouldn’t be able to shoot? That seems so silly now. If he can shoot the ball like this and combine that with his elite ability to get to the rim only now finish, we have ourselves one hell of a player.

Not for nothing, we should mention his 13 rebounds too. Yeah yeah Summer League I get it, but Jaylen had never had more than 8 in any professional game before, so I will commend him on his commitment to the glass because this team ABSOLUTELY needs it. Jaylen finished with 29/13 on 10-16 shooting in just 30 minutes and I was so impressed I was even able to look past his 4 missed FTs. See, I’m working on things this summer too.

The sad news is it wouldn’t shock me if the Celts give Jaylen one more game before they just say OK enough is enough we need you healthy for the season. It sucks because it’s only his second year, and second year guys need all the reps they can get especially when they didn’t really play a lot during their rookie year, but if he’s ready then he’s ready.

– I thought on Draft night when we heard all the Paul Pierce comparisons for Jayson Tatum that it was a lazy comparison. But after watching his first performance in a Celtics uniform, I see it. He’s slow but effective like Paul, his footwork is pretty advanced offensively for a 19 year old like we hoped, and the dude is absolute nails. First the numebers: 21 points (8-17 shooting) 7 rebounds 3 assists 5 steals in 33 minutes. Now because it was so nice, I think we should enjoy his performance uninterrupted too

Philly fans might not want to admit it, but Tatum outplayed Fultz. That’s not to say Fultz wasn’t good (he was), but Tatum just happened to be better that’s all. Sure you can’t determine their career based off one Summer League game, but wouldn’t you say it’s better to have this result than the opposite? If Tatum stunk and Fultz was awesome you damn sure Celtics fans would be hearing about it from everyone with a Twitter account so please spare me.

A lot of what we heard about Tatum we saw in this game. I liked his inside/outside approach, the kid can finish hard at the rim, but also has that nice little finger roll. I thought he was a little trigger happy from deep, but that isolation game is no fucking joke. I don’t care if it was against guys who won’t make a roster, execution is execution in my book and this was exactly what he gave us with the game on the line, execution.

Let’s talk about this last shot and why after seeing it, the Pierce connection made sense. As Celtics fans we’ve seen this clog the toilet offense a billion times during the Pierce era. Doc loved that shit. Everything about Tatum on that shot was like watching Paul. The pace at which he started his move, the patience, and most importantly, the finish. What I liked about this was he kept things very very simple. He recognized the spot he wanted to get to, his defender made no effort to take that spot away, and Tatum calmly stepped into a shot he has just previously hit and that was that. To me it doesn’t matter when these games are played, having your prized rookie step up, take, and make big time pressure shots are all important steps in his development.

Aside from the offense, how could you not like his 7 rebounds and 5 steals. Yes, there is a gigantic difference in the type of player he will be defending in a few months, but for something that was a question mark heading into the Draft, I’d say he passed his first defensive test with flying colors.

– Finally the big man arrived in the US, and finally the Celtics have someone who is interested in being a monster and getting offensive rebounds. I’d say the debut of Ante Zizic was for the most part positive, we saw what a force he can be down low and how aggressive he is which is nice. Offensively he was pretty limited, but that’s to be expected in my opinion. I liked how he ran the floor well on that transition basket from Tatum, and was also impressed with his ability to take it from around 26ft all the way to the rim before getting fouled. The Celtics haven’t had a big like this on the roster in quite some time, a dude that is an absolute beast who is all about being physical. Maybe since Perk now that I think about it. He ended the night with 9/5 in just 19 minutes, and this was with missing a handful of FTs which I’m told shouldn’t be a problem. The Celtics NEED Zizic to work out, and while his road is long and development no where near complete, for many of us this was our first look at the guy and you have to like what you see to some extent

– I will be shocked if Abdel Nader doesn’t make this roster. Even though he didn’t start Nader did play 29 minutes and I’ll take his 13/7 on 54% shooting. What I liked about Nader’s performance was everything came from attacking the rim. At 6’8 225 he has great size and he sort of showed maybe he’s a little too good for Summer League as well. Remember, Nader was the D-League Rookie Of The Year, and the Celtics certainly have the roster spots open for him to finally make the team this year. For a guy his size I was impressed with how he handled the ball in traffic, and the second unit is going to need guys who can contribute offensively. Maybe we see him in a Jonas role or something, but I’d say Nader was the 3rd most impressive Celtic in this game by far.

– Poor Philly, can’t even hold on to a double digit lead in the Summer League. Some things just don’t change no matter what stage of the process you’re in I guess.

– It wasn’t all good on Monday and I want to start with something of concern regarding Jaylen. I need his handle to be better. His 7 TOs are way too many, and his transition dribbling could still use some work. If Jaylen is truly going to take a leap this season, he needs to be better with the ball in his hands period. This is twice as important if he’s going to be playing a lot of SG this year. At times he forgets to protect the ball and leaves it exposed for someone to poke it away, and usually this comes when he forces things offensively.

– I’m not sure of the Euro schedule, but Zizic did not look to be in game shape. Maybe he was tired from his season overseas or something, but that man was huffing and puffing real early. I suppose that’s what this plus training camp are for, but I was surprised with how out of shape he looked.

– It made me uncontrollably sad that there was no Yabu in this game. I need Yabu, we all need Yabu, but sadly there is no Yabu to be found.

– Scoochie Smith getting a DNP-CD is just wrong. How do you not play a man named Scoochie? That name alone is probably good for 12 points on solid shooting percentages. There’s no point in having a Scoochie if we don’t get to hear the announcers say Scoochie. Figure this out please.

– I was a little underwhelmed with Semi. He did have that nice dunk, but other than that he was sort of meh in his 29 minutes. Defensively, both PHI guards had pretty good nights, and I was banking on the fact that Semi was going to be this beastly defender. Maybe he will be, but he wasn’t in this game.

– Everything Demetrius Jackson did. Part of it was his 3-12 shooting, part of it was going under a billion screens and playing bad defense, part of it was being out of control on offense, this was not a strong showing from DJax. It just felt like every time he had the ball he was either missing a layup or getting it blocked at the rim and while I commend his aggressiveness, we’ve ALL played pickup with dudes like this. Guy keeps calling his own number even though he hasn’t done dick to warrant such confidence.

– Maybe they are taking a page out of the starters playbook, but you could not ask for a more lifeless, pathetic start to the second half in this game. Going from being tied to down by as much as 15 in that third quarter was so predictably Celtics you almost have to respect it.

The Celts title defense continues tonight at 7pm against the Spurs who are 0-1 so far in Utah. I’m not saying it’s time to start thinking irrational thoughts about these young Celtics players, but I’m also not saying you’re wrong if you’ve planted the seed.

What a weekend this was for our beloved Celtics and Danny Ainge, and the good news is it’s only going to get better.