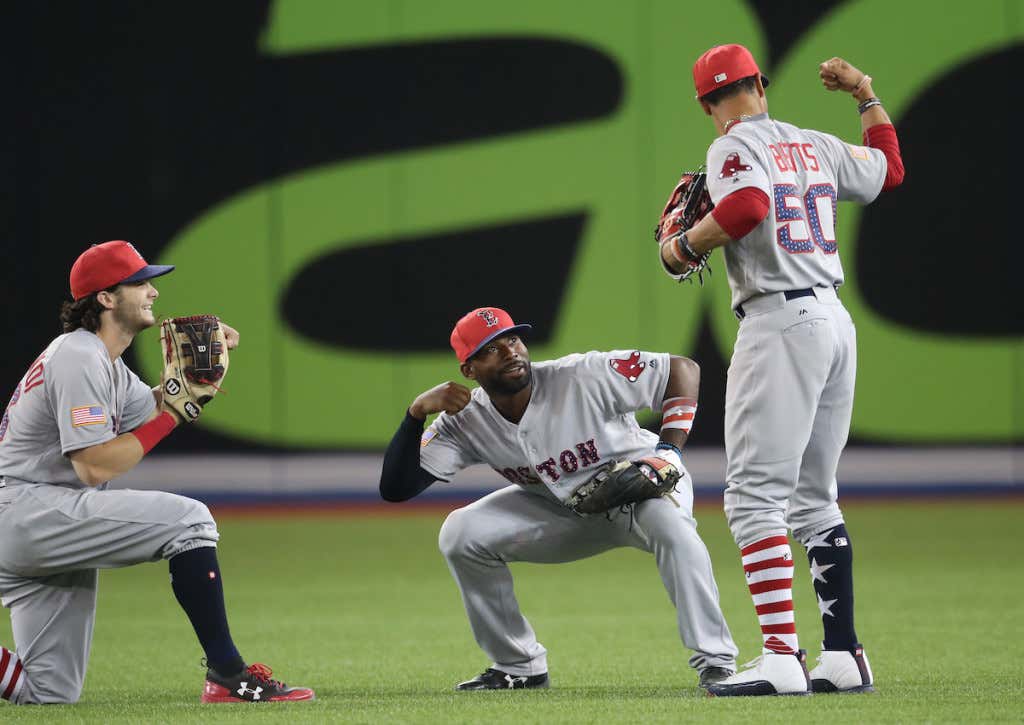 After unmercifully stomping on the Toronto Blue Jays’ dicks with steel toe boots on Sunday to win their fourth straight game by a score of 15-1, the Red Sox increased their division lead in the AL East to a season-high three games over New York.

Remember that Sunday Night Baseball game against the Detroit Tigers that took over four hours to play even though it didn’t go into extras? The Red Sox lost 8-3, Drew Pomeranz couldn’t even give them five innings, and it was honestly the most boring game I’ve ever watched in my entire life. The Stanley Cup had just ended, the NBA Finals were about to wrap up, and it was really the first Sunday Night Baseball game where all eyes were on the MLB, yet this was the shining example of the league’s product — the Red Sox getting their teeth kicked in by a mediocre Tigers team with a starting pitcher who can’t even pitch five innings.

Why am I even talking about this game? Because after that loss on June 11, the Red Sox fell to four games back of first place. Exactly three weeks later, after going 13-8 while the Yankees have gone 7-14, Boston is now three games up. A seven-game swing in three weeks — you don’t really see that too often. The Yankees have had the worst record in the American League, while the Red Sox have had the third best over that span, so New York’s plummet back down to earth has been just as important as the Red Sox playing well.

Fittingly, it was Pomeranz on the mound again for the Red Sox on Sunday. Pomeranz has completely turned his season around, as he’s now tied for the major league lead for most starts of allowing two earned runs or less. He’s allowed two earned runs of less in 13 of his 16 starts, but it doesn’t feel that way. Why? I feel like I say this every time he pitches, but it’s never because he gets lit up; it’s because he wasn’t going deep into starts.

Now, before you jump down my throat for getting on Pomeranz for when he was sucking, that’s not how this works. You can say a guy sucks when he sucks, and then when he actually figures out, that doesn’t undo the significant stretch of games where he sucked. If you wanna go back even further, from his first start with Boston on July 20, 2016 through his first eight starts of this year, it wasn’t much better — he had a 4.73 ERA, a 1.41 WHIP, and he was averaging an even 5 innings per start. The frustration comes from never having seen the pitcher that the Red Sox thought they were getting last summer. These last eight starts have really been the first time where you could look at the Pomeranz Era in Boston, and be like, wow. Okay. This guy’s actually pretty good. We hadn’t seen it yet. We’re seeing it now.

So, again, credit where it’s due. Pomeranz has obviously figured something out. But what? Well, the pitch that made him an All Star last year for the Padres was his cutter. Last year, Pomeranz threw his cutter 12.8% of the time. Through his first eight starts this year when he struggled, Pomeranz threw just 11 cutters total. Over his last eight starts, he’s thrown 64 cutters. So, there’s a significant uptick in his usage of the pitch, but he’s still not even really back to the frequency of how often he was using it last year. Regardless, the results are there.

And over that eight-start stretch, which dates back to May 25, Pomeranz has the best ERA on the Red Sox pitching staff, and is second to only Chris Sale in WHIP, strikeouts (47) and K/9 (9.20). If Eduardo Rodriguez hadn’t gotten hurt in Baltimore, it’d be interesting to see where he’d rank in all of this, but you don’t get credit for what might’ve been. Plain and simple, Pomeranz has been the second best pitcher on this Red Sox staff for over a month now.

But it was a huge day for the Red Sox offense, which sort of buried how good Pomeranz was again. Had to give him his props first. The man of the day, though, was Mookie Betts. I had written last week about how through 76 games, his OPS was almost identical to what it was through 76 games last year, but that he still finished the season with an OPS that was about 50 points higher. If history were to repeat itself, then a monster second half might be on the horizon for Mookie, only it looks like he didn’t want to wait until the second half to get started on it. Mookie went 4-for-6 on Sunday with two homers, three runs scored, and EIGHT runs batted in. If you’re keeping score at home, he raised his OPS 27 points just on Sunday alone.

Speaking of guys heating up, Hanley Ramirez had that exchange with reporters last Wednesday about how he wasn’t hitting lefties well and just underperforming overall. He played dumb and acted like he didn’t know that, but his response was basically just a “fuck you” to the reporters, which works for me if that’s what motivates him, and apparently it has. Hanley hit a home run in his first game back in the lineup following that exchange, and in the four games since, he’s hitting .474 with a 1.447 OPS, including going 4-for-5 with two doubles and a home run against lefties.

In Boston’s season-high 21-hit attack on the Blue Jays yesterday, you had six guys in the lineup with multi-hit games. Mookie had four hits, Hanley, Deven Marrero, Jackie Bradley Jr., and Tzu-Wei Lin had three, while Dustin Pedroia had two. I don’t know where the fuck Lin came from. I had never heard of him before he had been called up, but the kid can fuckin’ play. He’s a tiny little guy, but he’s certainly made the most of this opportunity, and already has more triples through eight games (2) than Pablo Sandoval has through three years in Boston (1).

And Marrero, the “infielder who can’t hit” is hitting .455 with a 1.091 OPS over his last six games. This is why I say don’t waste any assets on a third baseman at the trade deadline. Just ride it out with Marrero, and let him be your Stephen Drew — a great defensive infielder who might surprise you here and there with what he can do at the plate. He’s obviously not going to hit anywhere near .300, but he can get hot for occasional spurts and his defense is worth having him in there every day. If you have tradable assets that won’t deplete the farm system any more than it already has been, then use them on getting a reliever to compliment Joe Kelly and Craig Kimbrel at the backend of that bullpen. That’ll be the greater need come October.

Side note — I just wanted to say how fucking relieved I am that Mike Barnicle’s report about Pete Frates this morning was absolutely false. I feel like an idiot for reacting to it as if it were true without hearing from the family first. I knew that Pete was in the hospital yesterday, and I had texted his brother Andrew late last night asking how Pete was doing and never heard back. This was unusual since he almost always responds, so I guess that’s why I didn’t question the accuracy of the report. Lesson learned.

But if there are any positives that we can take out of Barnicle giving us all a scare this morning, it’s A) realizing how beloved Pete is, B) facing the reality of how horrible of a disease ALS is, and C) taking that horror and turning it into a positive action. There are enough of us out there who care about Pete and what he and his family are going through, who also want to make sure that other families in the future will never have to endure what the Frates family, and other families like them, have had to endure over the last five years. Pete Frates’ website has three different ways that you can help both he and his family, along with helping to fund ALS research. If you can’t donate, feel free to share the link on social media.