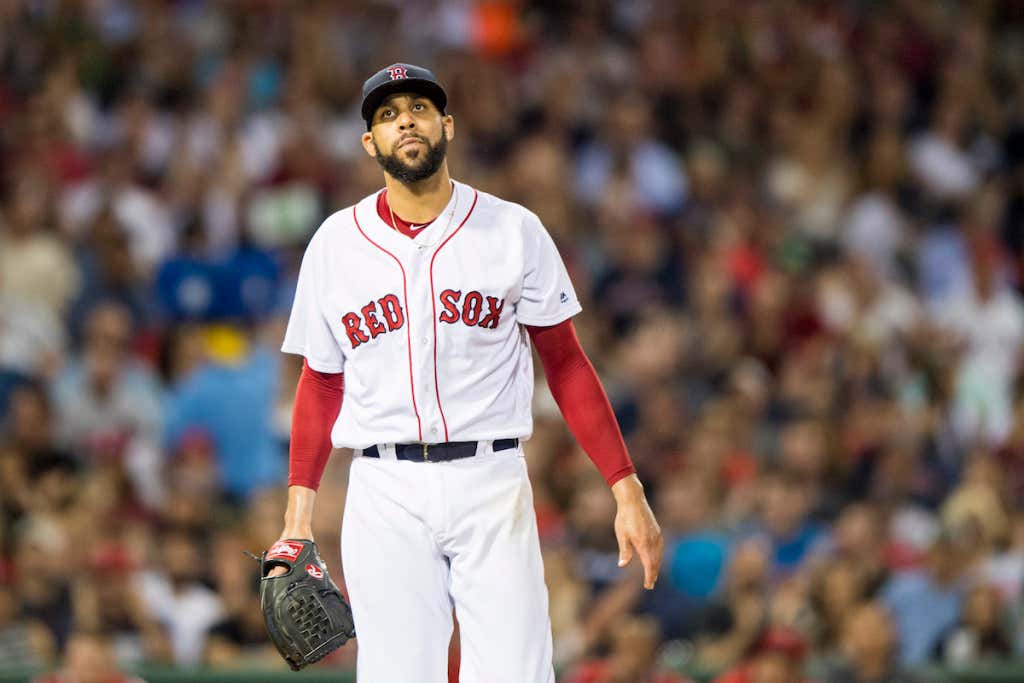 The Red Sox won last night in Toronto, protecting their one-game lead over the New York Yankees in the division, but that wasn’t the big story surrounding the team last night. It was this one — the one where we learned that David Price apparently had it out with Hall of Famer and NESN analyst, Dennis Eckersley.

John Farrell, Dave Dombrowski, and David Price met before Friday night’s game over an incident in which Price verbally confronted NESN analyst Dennis Eckersley on the team flight from Boston to Toronto after Thursday night’s game. Farrell confirmed the meeting but wouldn’t elaborate, indicating “it’s being handled internally.” The Red Sox manager also confirmed that Price would make his next start, but there was no indication what possible disciplinary action, if any, took place.

Price was one of many who indicated he didn’t want to speak on the matter. When asked if the situation was settled and over with, Price answered “Yes.” When pressed for more details, he said, “Some people just don’t understand how hard this game is.”

Eckersley, now a NESN analyst, was asked about the incident before Friday’s game, but would not comment. A similar no comment came from Dombrowski and team president Sam Kennedy. What was known was the team was disturbed by the second such incident between Price and a media member.

Okay, so there are a couple of different ways that I want to go with this. First, I was waiting a little bit to see if more details would come out. So far, they haven’t. I’ve done some digging myself and come up with nothing, other than being told that there is more to the story than what’s out there right now. Well, no shit. We know that there was an incident, but we don’t know what it was over, or what was said.

By the way that it was written in the report — “Price verbally confronted NESN analyst Dennis Eckersley” — it would seem obvious that Price started it. But why? The most popular theory is that Price might’ve taken exception to Eck’s comments about Price not covering first base in his start against the Twins on Thursday night.

You and I might listen to that whole clip and hear the part where Eckersley says, “I thought he caught that ball in the air,” and “I’ve done it. It happens.” But somebody like Price, who clearly has a disdain for the media and feels like they’re out to get him (and some are) could listen to that same clip and only hear things like, “And then where’s David Price?” and “Look at that. That is a major, major mistake.”

Eckersley acknowledged that, to the naked eye, it looked like Mitch Moreland caught that ball in the air, and not covering first base on a play where he thought the ball had been caught was a mistake that, even as a Hall of Famer, he too had made in his playing career. But as an analyst, Eck still had to call it like he sees it, and the call is that it was a mistake to assume that the ball had been caught, and that he should’ve been there to cover the bag.

Eck did everything correctly there. Be fair in disclosing that he’s also done the same thing that Price just did, but also explain to the viewing audience that it’s no excuse to assume that the first baseman had caught it. The pitcher’s gotta be there to cover the bag. Again, this is all under the assumption that this was even what Price confronted Eckersley about. That, we still don’t know at the moment, but this theory surely makes the most sense. 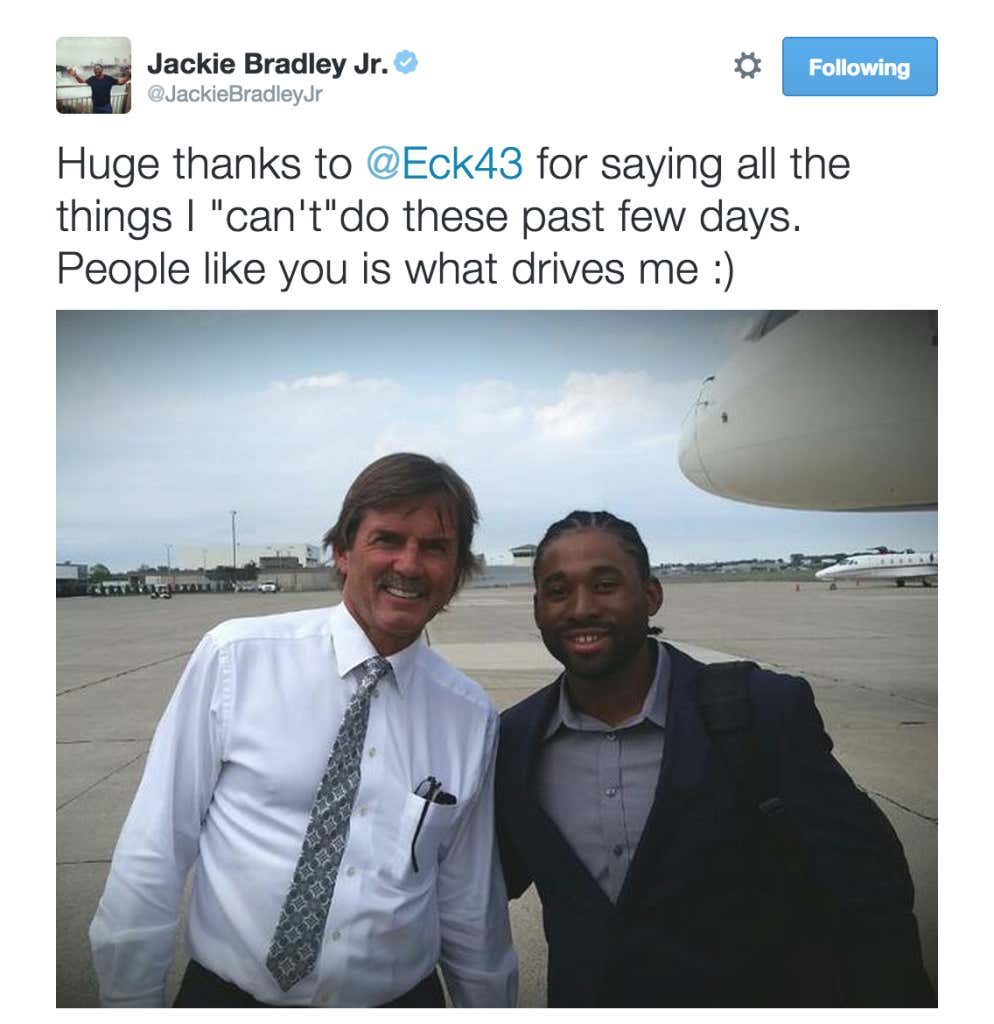 The other bit of information that we have that I haven’t seen anybody else mention here is that Price is not the first player in that Red Sox clubhouse to have an issue with Eck for something that he’s said about them. Jackie Bradley Jr. did this in 2015, but then he retracted his tweet after it showed up on Barstool. It’s also worth noting that I’ve been told that Eck isn’t exactly a popular figure in that Red Sox clubhouse even now. I was told that there are a handful of players who would not be pleased if Eck were to show up in the Red Sox clubhouse, and that was way before this incident with Price occurred.

Building off of that, here’s my theory. Were Eck’s comments about Price not covering first base enough for Price to snap on him? No. Of course not. They were both tame and very fair. But I go back to the incident with Price flipping out on CSN’s Evan Drellich in the clubhouse almost a month ago. If you recall, in that story, Rick Porcello also got involved during Price’s heated exchange with Drellich. There’s two guys that we know of who aren’t fond of Drellich, and the list doesn’t end there in terms of Red Sox players who aren’t sending Christmas cards to Drellich this year, but we don’t have to mention any names. Who spoke up on behalf of the disgruntled players in regards to Drellich? It was Price.

I’m telling you that Price isn’t the only player in that Red Sox clubhouse who isn’t fond of Eckerlsey, regardless of whether their reasoning is right or wrong. Who spoke up on behalf of the disgruntled players in regards to Eckersley? It was Price. So while it seems like Price is the only guy who has a problem with the media, that’s not true. He’s just the only guy who’s acting upon it.

So, if this is Price’s way of saying, “Well, everybody in Boston already hates me, so I might as well be the leader who takes all the heat in order to stand up for the rest of my teammates, coaches, etc.” then to that, I would say that I don’t hate the idea, but you picked the wrong guy in Eck to go after, and if it’s about his comments after you didn’t cover first base, then you also picked the wrong argument in general. My guess is that this might’ve just been the straw that broke the camel’s back, and this was probably something that had been building for a while.

If you want to have this mentality of it’s us twenty-five guys versus the world, then do whatever you feel you have to do to motivate yourselves to a championship, because at the end of the day, that’s all the fans care about, and that’s your only lethal weapon against the hot take media who salivates when things go off the rails. If you feel like someone in the media has wronged you, I’ve got no issue with Price, or any other player for that matter, going after said media member to defend themselves.

But I’ll say this one more time — Eck ain’t that guy. His Hall of Fame ring gives him free rein to call it exactly how he sees it, and he’s never looking to bash a guy just to bash a guy. He may say some shit that you might not like, but it’s only because it’s the truth. And if the truth hurts, then you need to look at yourself, not where that particular truthful statement came from.

UPDATE: We’ve got this report from MLB Network’s Jon Morosi, which lines up with my theory about Price taking it upon himself to defend his teammates in a leader-type role.