Boise Hawks Manager Mal Fichman is suspended one game for one game by the Northwestern League (Single A) after returning to the field after being ejected for arguing in the sixth inning. After getting ejected Fichman grabbed the costume of the team’s mascot Humphrey the Hawk and continued giving signals to his team in a game against the Salem Dodgers. 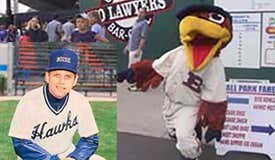 The incident which led Mal Fichman to wear the feathery costume came in the sixth inning when Hawks second baseman Paul Cluff was ejected by Umpire Andy Gonzales arguing a close play at first base. Cluff, one of the team leader rarely argued according to Fichman, so his ejection took the manager by surprise. Cluff had insulted the umpire’s height and Fichman was tossed defending his second baseman.

Walking off the field, Mal Fichman noticed the mascot taking a break. The manager had suggested to “Jason” who donned the costume to go under the stands and take off the head whenever he needed a break, because it would often get hot under all those feathers. The man in the Hawk suit was a Lineman for the Boise State football team earning some money during the summer. Walking over to Jason, Mal Fichman asked the man in the Hawk suit if he was done for the night, when he responded no, Fishman said you are now took the suit made of Velcro and put it on over his uniform.

Players were slow to realize their manager was in the mascot costume, though things seemed different as Humphrey the Hawk was usually nested in the stands, but slowly he worked his way on to the field and walked by the Hawks dugout and told the team to bunt in a key situation in the eighth inning. It’s a little fuzzy, how Fichman was caught, some accounts say umpires realized Fichman was in the mascot suit because he kept on his spikes, other accounts say Fichman after the game forgot to take off his mascot feet, but no video exists and no pictures so it will just be one of those stories that happened in the minors before everyone had camera and instant fame.

Mal Fichman would continue to a successful manger in the low minor leagues, he would win several championships managing independent teams. He would never reach the majors, but later served a scout in for the San Diego Padres, Philadelphia Phillies and Arizona Diamondbacks. His colorful antics were not on tape, and only a few hundred fans were in attendance but surely served as motivation for other managers like Bobby Valentine, who once returned to the Mets bench with a fake mustache. Maybe Bobby V should have gotten an assist from Mr. Met, he may have gotten away with it. Though Mr. Met has gotten in enough hot water over hand signals.