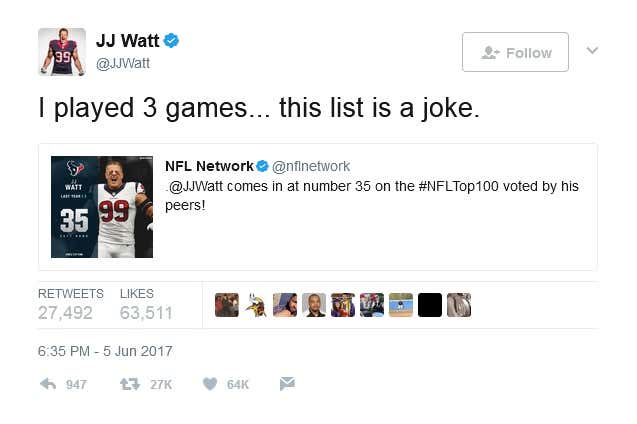 It doesn’t matter where your allegiances like or who you root for, if you can’t recognize greatness when you see it, then you’re missing out on truly enjoying life. As Voltaire put it, “Appreciation is a wonderful thing. It makes what is excellent in others belong to us as well.” And the greatness we’re witnessing in J.J. Watt deserves to be appreciated.

When it comes to the attention-whore game, there is just nobody competing on his level right now. What does he do when he’s playing? Mug it up. Play to the TV audience. Go on America’s Game and make it all be about yourself. What does he do when he’s injured? The same thing. Stand on the sidelines. Park next to a camera and give them a reaction shot after every, single play. Run out on the field and dish out High-5s as much as possible. And what does he do when NFL Network inexplicably slots him between #36 Tyreek Hill and #34 Kam Chancellor on their Top 100 list? Do the unexpected and complain about it.

It’s genius. When it comes to humblebragging, he’s not merely playing chess while everyone else is playing checkers. He’s playing Wizard’s Chess at a level Ron Weasley couldn’t dream of. So instead of everyone just saying “It doesn’t make sense that Watt would be so high when he missed practically the whole season” and moving on with their lives, now the story is how self-deprecating J.J. Watt is. And that’s how you take a simple anomaly on an early June TV filler list no one is talking and turn it into 27,000 retweets of respect for your humility. Diabolical. Simply diabolical.