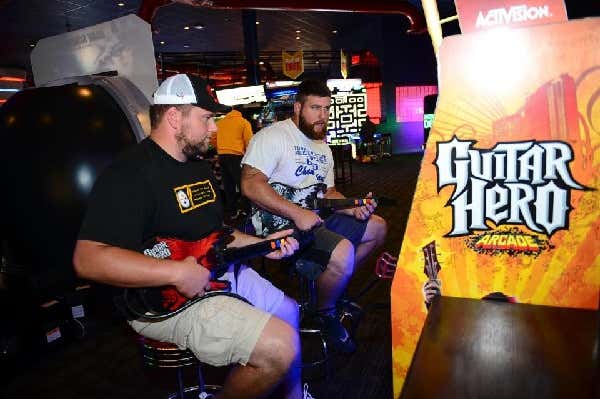 Steelers.com – Who says Mondays aren’t fun days? For the Steelers, this one certainly was. Instead of taking the field for a scheduled OTA practice, they headed to Dave & Buster’s at the Waterfront for arcade games and team building. …

Coach Mike Tomlin has made it an annual tradition to give the players a day off during OTAs, a day for them to have fun and build camaraderie that will come in handy during the dog days of training camp and into the season.

“We acknowledge that camaraderie and togetherness is very much a part of team development,” said Tomlin. “Our closeness is going to get us out of tough situations. We know that. We show respect for that by taking a team activity day and doing something that fosters that togetherness and brotherhood.”

For some reason, this story just makes my heart glow for reasons that are hard to explain. And it’s not because I don’t like Dave & Buster’s. If you want to get a better steak in an arcade setting, you’re shit out of luck.

And it’s not because I’m against team-building exercises. Quite the contrary. Relationships matter. It’s deep in the human race to want to belong to a larger whole working for the common good. From the days guys were getting together to sharpen their stone spears and head out to hunt mastodons to the Leslie Knope Employment Enjoyment Summerslam Grill Jam Fun-Splosion, bonding activities have always been part of group dynamics. Which is why Bill Belichick takes his players on one outing every year.

What kills me is the difference between Belichick’s idea of a group funtivity and Tomlin’s. The Hooded One has taken his team to the movies to see:

–Shackleton’s Antarctic Adventure, a documentary about a ship that was trapped in the ice in the worst place on Earth for 17 months, but everyone worked together can came home alive.
–Lone Survivor, the true story of an American SEAL Team cut off from help behind enemy lines surrounded by hostiles and fighting for one another.
–American Sniper, the biography of Chris Kyle, who put himself in harm’s way to protect his brothers in combat.

Mike Tomlin takes his guys to play Whack-a-Mole. It’s the difference between taking a class field trip to a science museum or to an amusement park. I know which is more fun, but which one teaches you more? And if you want to say “Hey Old Balls, didn’t Belichick take his guys bowling not long ago?” I’ll say yes he did. But first of all, bowling is the sport of kings. A noble and elegant game, perfectly suited for hyper competitive adrenaline junkies like pro football players. Second, like his movie outings, he did it towards the end of the season. When his players had been grinding every day since mid-July and needed the mental and physical break.

Tomlin blew off a practice in June. When he should be trying to lay down a foundation, install a playbook, make sure his rookies are grasping the concepts, calls and nomenclature, he’s got them paying Pop-a-Shot and Dance, Dance, Revolution, trying to earn 10 million tickets so they can get a plastic harmonica at the prize counter. And this is coming off a playoffs in which his star wideout was Facebook Live-ing in the middle of his postgame speech, an offseason that had his quarterback doing the Brett Favre retirement dance and his best running back blowing off OTAs. If anything explains a blowout loss in the AFC title game it’s that one coach is spending the Spring preparing for January, and the other has his guys playing SkeeBall.