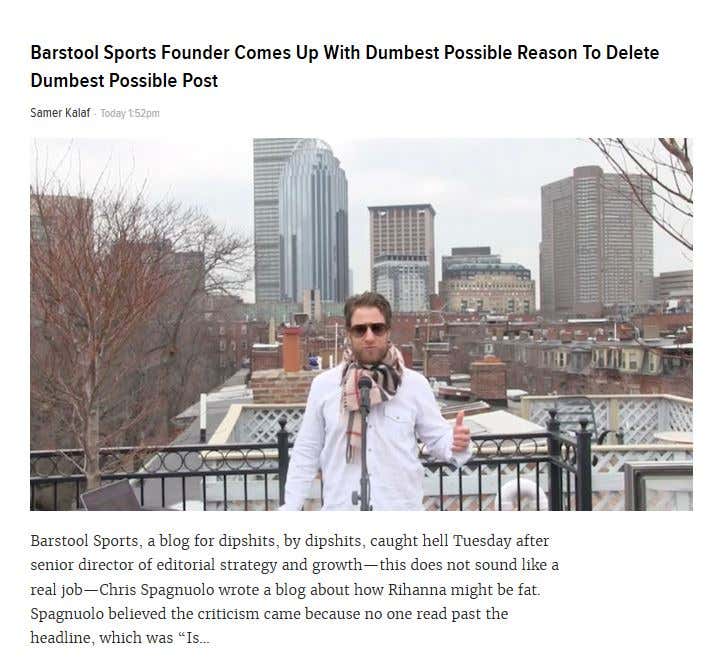 OMG look at this! Worst writer on the Internet Samer Kalif jumped in on the Rihanna fat blog controversy today. WHAT A SHOCK. Now before I address what he said let me just say this. Samer Kalif is the worst writer on the internet. He’s clickbait city. He’s a kid who grew up popping his zits at UNH idolizing me and then threw a tantrum when he wasn’t good enough to work here and has had an axe to grind ever since.  He’s a kid who grew up here and hates the Pats.  He’s basically a loser who hates everything successful because he was never part of the in crowd and got picked on his entire life. This isn’t revisionist history. I’ve written about how bad he is at least 10 times. (Here) (Here) So naturally this was the most predictable blog of all time. He should have ethically declared his history with me before writing this hit piece, but he works for a company that has no morals. He works for a company that goes sued into bankruptcy for lack of ethics and made a name for themselves posting dick pics and girls possibly getting assaulted in bathrooms. He always conveniently forgets to mention that when he stands on his soap and rants and raves about righteous indignation.

But honestly none of that is here nor there. You want to know how stupid Samer Kalaf is? The dude literally picked an awesome photo of me to use for this article. Seriously if you’re going to run a hit piece against me because you’re jealous you probably  work for minimum wage and stink at writing at least pick an ugly photo of me. Lord knows there are tons of them floating around the internet. Instead he went with Italy Dave. That’s one of the strongest versions of me.  I mean I would have paid Univision to post this picture on their front page. You can’t buy this type of street cred. So once again thanks to Samer Kalef for playing right into my hands and showing what an absolute buffoon he is.

PS – Can I buy Samer’s contract you think from Univision? I could probably get him for a bag of baseballs. I’d love just to make him my slave.