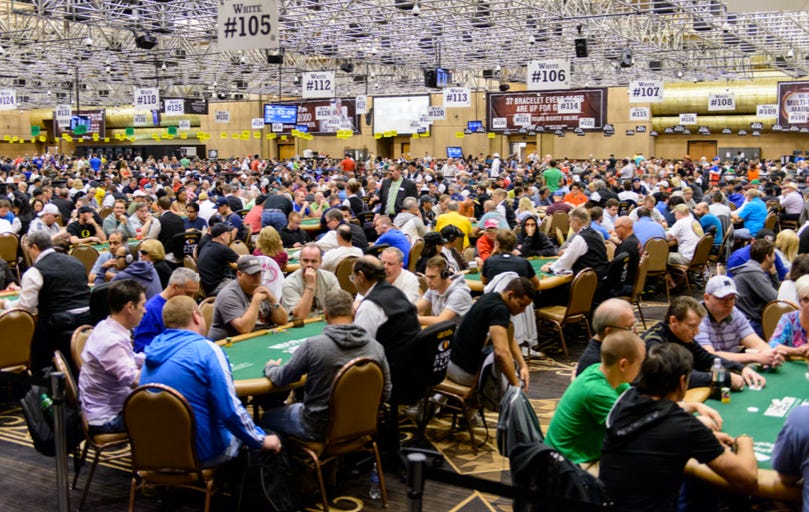 If you’re a regular reader of the site, you know by now I like to dabble in poker from time to time. Not too long ago I made a few dollars playing a local poker tournament, and then made a little more playing down there in November. I’m a bit of a poker fan, I enjoy following some of the best players as they travel the world playing the biggest tournaments. And now it’s the Super Bowl of poker, the annual World Series of Poker from the Rio in Las Vegas.

When most people think of the World Series of Poker (WSOP), the first thing that comes to mind is the Main Event, the $10,000 buyin no limit hold’em tournament you will see on ESPN when you’re flipping the channels late at night.

What a lot of casual viewers don’t realize is that is the final event of a month and a half long series of poker tournaments, this year 74 tournaments in all, spanning every variation, with buyins as low as $333 and as high as $111,111. The WSOP is held at the Rio hotel in Vegas, in 3 huge convention center rooms where they set up thousands of tables to handle all of the events, such as the one you can see above.

So what does it mean when you enter a poker tournament, as opposed to when you play in a cash game with your friends? When you decide to play a poker tournament, you pay the entry fee+the rake that goes to the casino and get X amount in tournament chips. The blinds progressively go up, and somewhere around the top 10% of the people who enter make the money. You have to accumulate chips as the blinds go up because once you lose all your chips, you’re done (unless the tournament allows re-entry, which a few of the WSOP events allow). 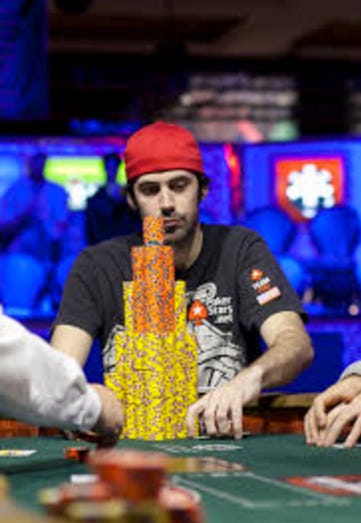 The thing about the WSOP is while the buyins might seem large (most are 1k and above), the best poker players in the world who have a shit ton of money find it hard to be motivated to play a $1,000 tournament when they are used to playing buy in’s of 25k, 50k, and 100k, as well as cash games where they can win or lose mid 6 figures+ in a session. But that’s what also makes these WSOP events so profitable for the pros..a ton of amateur players go to Vegas to take shots at the glory. They’ve seen Chris Moneymaker do it. They’ve seen Darvin Moon do it. So the question always is, “why not me?” WSOP events are considered “soft” for that reason- lots of amateur players playing out of their comfort zones in tournaments with big prize pools. 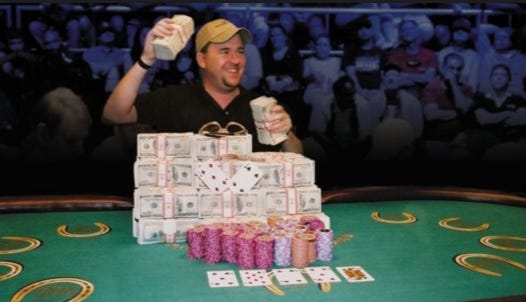 You might be wondering, are those guys I used to see on TV still the best players? Absolutely not, for the most part. All the “TV stars” of the early days got replaced by young guys who realized that with a good work ethic, understanding of math, and hard work, you could get very rich playing poker. When poker blew up big on the Internet in the mid 2000’s, a swarm of very smart young people made a shit ton of money because everyone else was so bad at poker. But that’s not to say some of the older players aren’t still legit. Phil Ivey, maybe you’ve heard of him, is still one of the best, if not the best, in the world. Daniel Negreanu is still phenomenal…probably actually better than he used to be. And Jake Toole is still one of the best of all time.

– I said above that the best players in the world often have a hard time being focused because the buyins are so low. So to counteract that, many of the richest and most degenerate make “bracelet bets” where they bet a ton of money (in the millions) on if they will win a bracelet during the summer. It is the only way they can stay focused and not jump into the super-soft cash games that run in Vegas where they can win millions in one day, as apposed to only a couple hundred thousand over the course of 5 days in a tournament. High Roller Tom Dwan had a massive bracelet bet with nearly everyone in the high stakes community a few years back where he could have won 10mil+ if he won a bracelet…and then he finished 2nd.

– A lot of people sell pieces of themselves to better afford playing so many events. There are a ton of poker players who get houses together in Vegas and live out there all summer chasing the dream of a big pay day. They will sell %’s of themselves to reduce variance and stick within their bankrolls. If you’re good at poker, the WSOP can be profitable…but let’s talk about variance.

– Poker is a game of skill, high skill, with a luck factor involved. You can have aces and be all-in preflop and lose to 7-2, that’s the luck factor. It doesn’t mean you played your hand bad or wrong though. That’s the thing about poker- if you make the correct decision as much as possible, in the end you will be profitable and make money from the people who make the wrong decision too many times. But that’s where variance and sample size comes in. 74 events are not enough to properly evaluate how good someone is at poker. Phil Ivey, a top 5 player in the world, made something like 10 final tables a few summers ago. Dominated everything he played. The next summer he didn’t make any final tables. Does that mean he sucks at poker? Absolutely not. That’s called being results oriented. With tournament poker, you just have to play your best and hope you end on the upside of variance. You need to win flips in key situations – for example you could be all in for a huge pot with 99 vs AK where you have a 54% chance of winning and lose. Win that flip, you can go on to win the tournament. An ace comes on the river and you go home. The tournament I played after the one I finished 4th in I lost JJ to AQ all in preflop- I win that hand and I’m pretty sure I go deep. I lost that hand despite getting my chips in good, so I drove home. Such is life in tournament poker.

– When I played online poker, I played usually 14 or so tables at a time. When you play live poker…it’s 1 table. And people take forever to make decisions. Transitioning from nonstop action online to live poker can be a bitch. Some people play very tight and wait for premium hands, while others like to mix it up and play tricky. Playing aggressively at a table full of nits can be profitable, and playing tight at a table full of spazzes can be profitable as well. It’s all about reading the table and knowing who you can take advantage of.

As of right now I’m not going to Vegas this Summer, though I’d like to. I’ve played smaller WSOP events before, but never the big boy main event. Maybe one day I’ll play in the $10,000 main event, but unless Uncle Portnoy (or my friends at the various wonderful advertisers of this here website) are feeling super charitable, it won’t be this year.