When the Cap stays flat 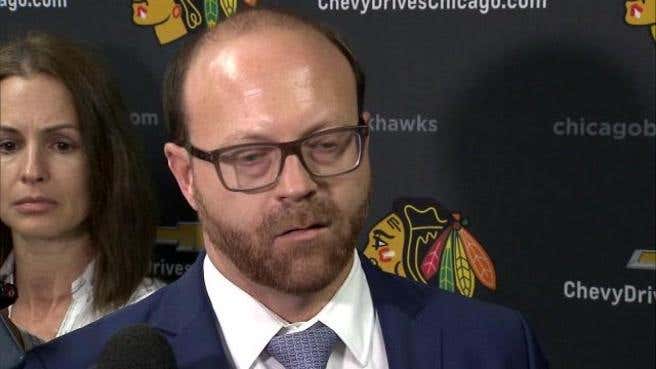 The 2017-18 NHL Season will officially begin over the next month with the Expansion Draft, NHL Entry Draft, and Free Agency set to take place. And as is tradition, the Blackhawks will have to trade away important pieces to their team in order to get Salary Cap compliant. What makes matters even more tricky for the Blackhaws is that for the first time the NHLPA may not invoke their 5% escalator clause to salary cap.

Before we get into the decisions and options for the Blackhawks, I want to explain why the players would opt to keep the Salary Cap flat. And I want to explain it because, well…I didn’t fully understand until today.

The Salary Cap is based on Hockey Related Revenue(HRR) which means all dollars earned from hockey related events. Media rights, jersey sales, gate receipt, sponsorships, etc are all factored into HRR. Prior to every year, the league estimates their HRR and that’s how they get the salary cap. If certain teams lose money and the HRR comes up short, the players actually cover the league’s losses by putting a percentage of their contract into Escrow. If the NHL hits their projections then the players eventually get their money in escrow back after an auditing process performed by the NHLPA. Escrow is basically a safety net incase the league doesn’t hit their numbers.

Obviously…the players hate giving up a chunk of their paychecks and if they don’t use their escalator clause then their escrow payments will be lower. The reason the NHLPA has historically opted to use the 5% escalator clause is because they want as much money available for free agents as possible. So while players under contract hate the escalator clause, they typically hold their nose and vote for it to help guys who are in their contract year.

This year, however, is a little bit different. The very nature of having a 31st team in the league means that there are an additional 25 NHL contracts and between $54M and $73M extra dollars to be had by the players. Because of that fact the NHLPA may actually opt out of the escalator clause because there’s seemingly more money to go around baked into the Vegas expansion team.

When the league gives that range of $73M to $77M its because they are waiting for both the final 2016-17 numbers to come in and to see what the NHLPA will vote to do. Based on conversations I’ve had with people in the league, I would guess that the NHL Salary Cap goes up slightly without the escalator clause simply because the Canadian Dollar rebounded a little this year and Canadian teams made the post-season. Having big market, hockey mad cities like Montreal and Toronto make the playoffs is better for the league than say having Florida or Carolina simply because they will generate a much larger gate receipt. Meaning tickets to a Maple Leafs game might cost an average of $180 USD and in Florida you can probably get in for 8 bucks.

Increased HRR alone won’t save the Hawks though. With Panarin’s new contract kicking in and their bonus overages from last year the Blackhawks, quite simply, are fucked if the Cap doesn’t go to that $77M estimated ceiling. 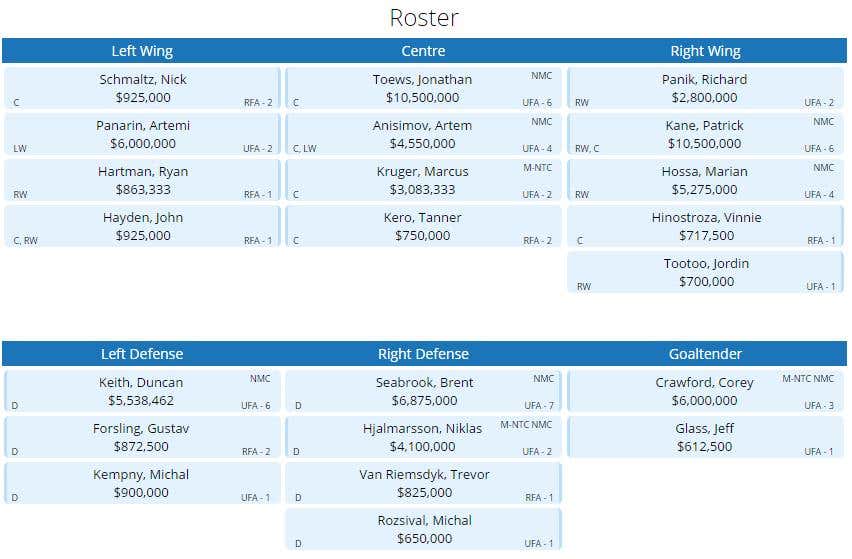 The Blackhawks would have to shed $4,520,628 from this roster just to get under the cap. Frank Seravelli of TSN tweeted today that the Blackhawks and the Vegas Knights are working on a trade that would allow the Knights to take TVR in the expansion draft and would then subsequently trade for Marcus Kruger. Giving up two important players just to get cap compliant and guess what…that wouldn’t be enough as their combined salaries add up to $3,908,333.

This is the point where everyone starts to bring up Brent Seabrook’s name. “Oh just trade Seabrook. He’s overpaid and old and his contract is bad”. People say it just like that. Now, I don’t think Seabrook is as bad as everyone says. He still makes a good pass out of his zone, plays in all situation, and logs pretty big minutes. That’s not to say he has a good contract, but replacing him on the ice and in the locker room won’t be an easy fix. AND that’s assuming the Blackhawks can even find a trade partner for him. If the entire internet knows that Seabrook’s contract is bad and his game is declining then guess what…the other 30 GMs in the leauge know that too. And that’s then assuming that Brent Seabrook will waive his FULL NO TRADE CLAUSE.

Seabrook has all the leverage in the world. He could decide that he, his wife, and kids are all very happy here in Chicago and that if Stan wanted the option to trade him then he shouldn’t have given him a full NMC on a contract that runs until Seabrook is 39 years old.

Obviously if the NHLPA does indeed vote to use their 5% escalator then the Hawks have SOME flexibility. Stan Bowman would still need to shed about $500,000, but some of that will happen with the expansion clause and they could massage the roster with certain call-ups through out the year to get under. The problem is that they just don’t have a very good defense if they lose TVR, Campbell, and Oduya.

In the coming weeks I will be doing a series of blogs that look at potential options for Bowman leading up to next season, but his options are limited and they are largely limited by handcuffs that he put on himself. Regardless of where the Salary Cap comes in, the Blackhawks offseason is going to be loaded with more fireworks.