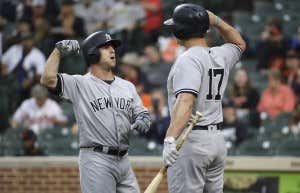 That was the perfect game for the Tuesday after Memorial Day. We’re all tired and bloated, so the last thing we needed was to stay up all night watching some extra inning nail biter. Thankfully The Yankees knew that and essentially ended this game in the 4th inning thanks to Brett Gardner and Matt Holliday each going deep twice.

Matt Holliday has been a great signing and is showing that if he can stay out on the field (healthy) and just focus on being our DH, he can still contribute at 37. With so much in flux at the DH spot the last few years, it’s nice to have someone that is in the spot everyday and trending towards a 30 HR, 100 RBI season with a .260 batting average. Add in his veteran leadership, which is needed for such a young team, and this is one of Cashman’s best signings in recent memory.

Gardner on the other hand has come out of nowhere. After just 7 home runs last season and none in his first 18 games this season, Brett now has 11 in the last 27 games. We’ve seen him go on runs like this in the past, of hitting a few home runs close to each other, but he tends to sacrifice stolen bases as a result. If he could continue to be a threat to go deep at the top of the order, while also being a danger on the basepaths, it really change the way starters have to focus at the beginning of the game against us. With 3 multi-homer games, Gardner now leads the AL.

As our rotation continues to be a question mark, Luis Severino set Girardi up for what should have been an easy night by going 6.1IP with just 1 run given up. Severino allowed 7 hits but also struck out 8 while working his way out of a few jams. His slider was on point last night, making hitters look lost at times, and he carried an overall confidence to the mound with him that you want to see out of a young star like him. As the season rolls along, Severino is setting himself up to be a 1 or 2 heading into the playoff push.

The Yankees are in a big stretch of games, playing 13 straight in the division and wins like this are important. Aside from Girardi driving himself crazy with his binder last night, this was an fun game for the players and relatively stress free. Last night marked the Yankees 30th win of the season, a mark they didn’t reach until June 9th of last year when they got to 30-30. I had no idea rebuilding could be so fun.