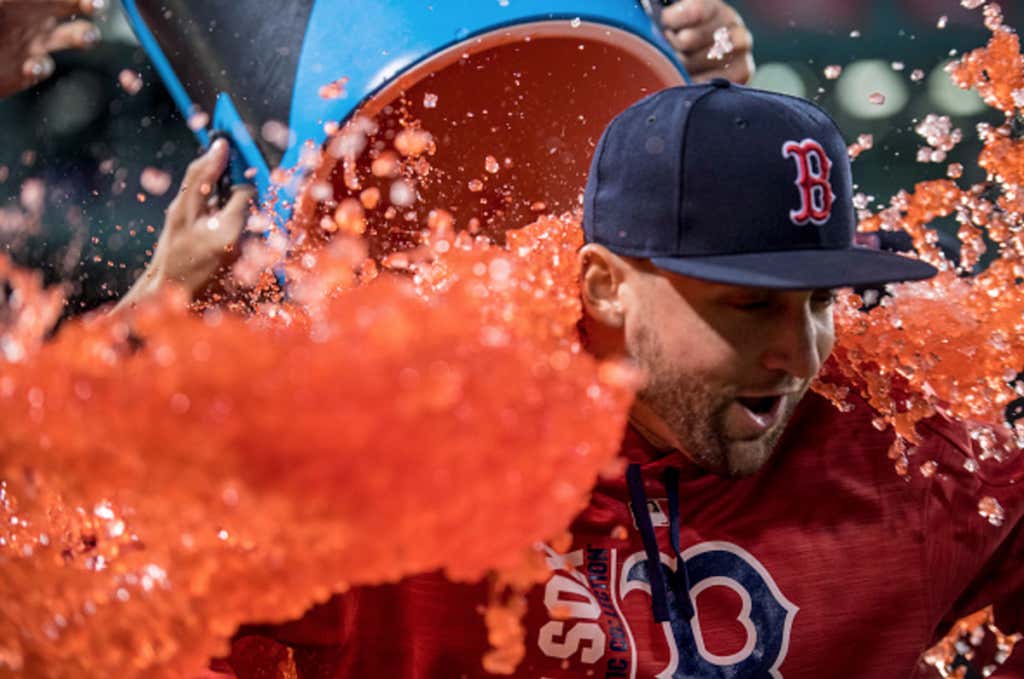 Over the last couple of days, this is starting to look like the Red Sox team that we originally signed up for.

Of course, all the good will that the team has built up over the last three games will inevitably be demolished when Drew Pomeranz struggles to make it through four innings tonight, but let’s enjoy this little run while we still have it, shall we? We went from a situation where the Red Sox winning on Sunday was essentially saving the manager’s job, to a situation where the Red Sox have a chance to match their longest winning streak of the season tonight. It’s only four games, which in the grand scheme of things isn’t that big of a deal, but it’s something. It’s not doom and gloom at this particular moment, which is more than what we’ve been able to say for most of the year.

The Red Sox are finally scoring runs — more runs than any other team in the American League in the month of May (123), second most in the majors — getting pitching performances that aren’t exactly great, but they’re good enough to win ballgames when you’re scoring a ton of runs, and they’ve mixed in some new blood to spice things up with Sam Travis’ major league debut last night. He went 2-for-4 with a run scored, by the way. Could easily see a problem on the horizon where it becomes a hard decision to send him back to Pawtucket, while also not wanting to take at-bats away from Mitch Moreland. Good problem to have.

Astonishingly, despite how mediocre this team has been overall this year, they’ve never fallen more than five games out of first place, and that’s with a brief stint in fourth place. After last night’s win, the Red Sox are a game behind the second place Baltimore Orioles, who have been a dumpster fire lately. They’ve lost 10 of their last 13 games, which is the worst record in the American League and only the Phillies have been worse than them over that span throughout the whole majors. Hey RDT, that’s why you don’t brag about the standings in the first week of May. Long season, bud. Act like you’ve been there before.

Chris Sale saw his near record-breaking streak of consecutive 10 strikeout games come to an end last night after he “only” struck out six batters. Steven Wright made five starts in 2017 and his season high strikeout total was four, so, just sayin’. Sale’s streak died at eight consecutive starts, as the lefty failed to strike out ten batters for the first time since his Red Sox debut back on April 5, but he’s still MLB’s strikeout leader with 101 strikeouts. The next closest strikeout total belongs to Zack Greinke, who is 23 strikeouts short of Sale’s total.

Not gonna lie, Sale kinda jinxed himself. I don’t have the quote in front of me, so I’ll paraphrase — somebody asked him about the consecutive 10 strikeout game record after his last start, and he said something to the effect of, “I don’t care about the record; I’ll take the win.” Well, he got the win, his fourth in his last five starts. Also, not to be a Debbie Downer here, just doing my job, but uh, Sale has an ERA of 3.95 in his last four starts. ANYWAYS! Moving on.

Xander Bogaerts had two more hits last night, his 16th multi-hit game of the season. Right now, he’s on a pace for 191 hits, which isn’t unrealistic whatsoever. This time of the year, you can look at what some guys are on pace to do, and more often than not, the player is not on a sustainable pace. Like, Aaron Judge is on pace to hit 55 home runs right now. He more than likely won’t do that. But Bogaerts’ hits pace is definitely sustainable. If he were to reach 191 hits this year, it would be his third consecutive season with at least 190 hits.

There have been plenty of complaints about Bogaerts still not having a home run yet, and I’m not exempt from that community, but he’s not having a “bad” season by any means. In the month of May, Bogaerts is hitting .345 with a .941 OPS. Motherfucker’s OPS is almost a thousand and he has zero homers. That means he’s making up for the lack of homers in other ways, like hitting three triples and ten doubles. The home runs will come. And honestly, even if they don’t, he’s still a really, really good fucking hitter. It’s a shame more people don’t realize that.

Radio plug: I’ll be talking Red Sox with Zolak and Bertrand today from 11am to noon on 98.5 The Sports Hub. LISTEN LIVE HERE.