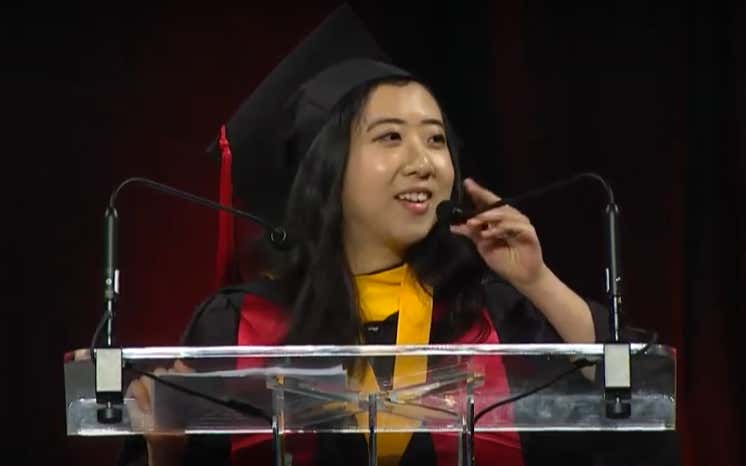 NY Times- Speaking at the University of Maryland, Yang Shuping, a graduating senior from China, sprinkled her upbeat commencement speech with observations that drew warm applause: The air was far cleaner in the United States than in China, she said, and she could openly discuss racism, sexism and politics in ways that she had never before dreamed possible.

Growing up in China, “I was convinced that only authorities owned the narrative,” Ms. Yang, a theater and psychology major from the southern city of Kunming, told the crowd in a basketball arena in College Park, Md. “Only authorities could define the truth.”

The speech on Sunday drew harsh criticism, however, from some of Ms. Yang’s Chinese classmates in Maryland and from legions of social media users in China, many of whom accused her of selling out her homeland. Even the city of Kunming weighed in, saying in a message on Weibo, China’s Twitter-like platform, that her comments about the city’s air pollution were “not related to us.”

In her speech on Sunday, Ms. Yang said she had been relieved to find that she did not need to wear any of her five pollution masks in the United States. She also discovered, she said, that the freedoms enshrined in the Declaration of Independence were not the abstractions she had once imagined.

“Democracy and freedom are the fresh air that is worth fighting for,” she said.

When I was growing up in China 2 weeks ago, I felt a lot like Yang Shuping. You could see the air. See it. The government suppressed me by “owning the narrative” and I was scared to discuss sexism/racism because I’m always scared of those topics since I’m a white male. Anyway, it made me miss the comforts of home, like the constitution, vegetables, and weights listed in POUNDS not KILOGRAMS. I go to the gym to get a pump, not to multiply by 2.2 (if you get this joke, you’re in the 1% of our readers).

Naturally, I was sympathetic to Shuping’s tale, since I’m half-Chinese now. However, given my journalistic integrity, I did a quick google search on the air quality of her hometown–Kunming.

Most of Yunnan Province enjoys high-quality air condition, including its capital and most developed city, Kunming. Kunming PM2.5 measurements of Kunming are always around 50 or below. (China Highlights)

Kunming has the 3rd cleanest air quality of any city in all of CHINA! What a sneaky, lying terrapin!! Like a female spider monkey! (Nate–slide. I’ll translate for you). Yang Shuping? More like… Yang DUPING! I’d have traded my passport for an hour of breathing Kunming’s clean, mountain air when I was choking down the pea soup atmosphere of Beijing. If Yang owns 5 pollution masks (congrats on being rich), they’re clearly for decoration only.

Hey Yang, you know nothing. Spend a day walking around in my smog boots. In the morning, I left our hotel with fresh, white Adidas Ultraboosts and by the end of the day, they were BROWN. We weren’t farming or playing in puddles; just walking on concrete while Beijing spray-farted my kicks to poop. Or get arrested trying to exercise your basic, democratic rights of taking a SAFTB pic in Tiananmen Square. Until then, I’m more Chinese than you and don’t insult the motherland.

PS- pink is the new black when it comes to masks. 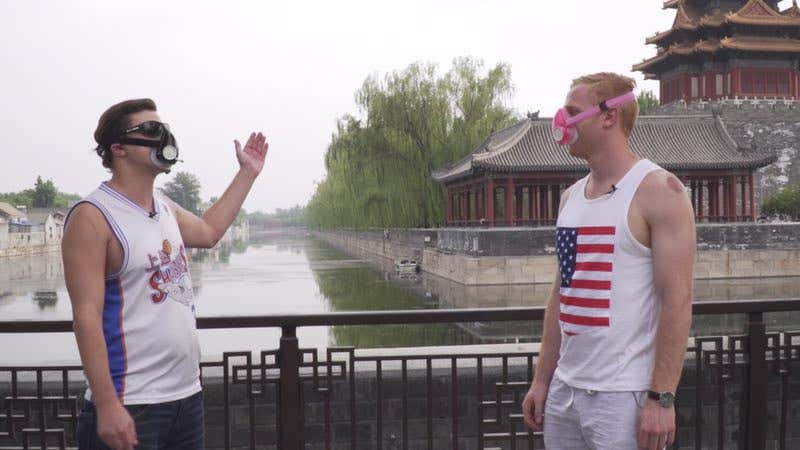 PPS- China vids are coming. Our editors are hard at work and our sales team is currently trying to sell it. Tentatively looking at August. I know, I know–believe me, I wanted to release them immediately. But this is a business, after all. Nantucket houses don’t pay for themselves, even when you only own half.