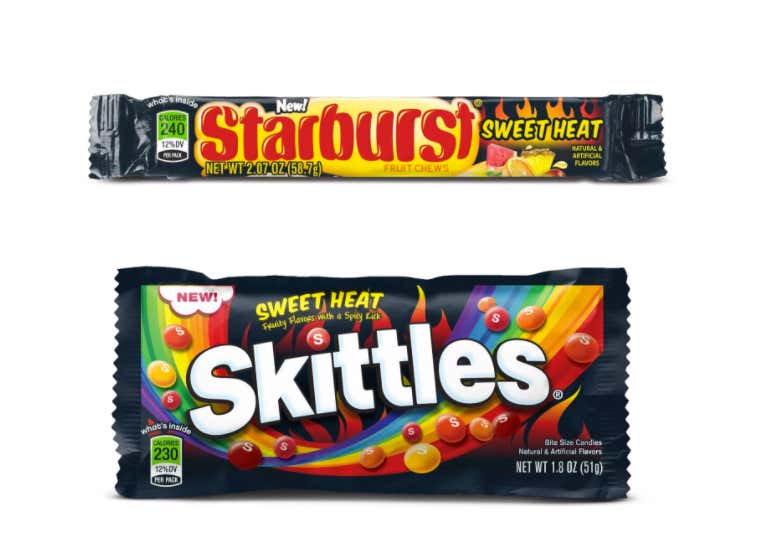 People- The candy aisle is about to get a little spicier. A representative for the Wrigley Company confirmed to PEOPLE that your favorite Skittles and Starburst flavors will be infused with a spicy kick this December. The “Sweet Heat” candies will have a a black wrapper and a new fiery logo. The Skittles flavors include Fiery Watermelon, Blazin’ Mango, Flamin’ Orange, Sizzlin’ Strawberry and Lemon Spark, while the Starburst are similarly flavored with Fiery Watermelon, Strawberry Mango, Flamin’ Orange and Pipin’ Pineapple. Both start at $0.99 per single pack and go up to $3.19 for a laydown bag.

Well I think it’s about time to wrap up humanity. Lets speed up whatever is happening in North Korea and Russia to 16x or so like we are playing Sim City 2000 and just let the nukes start flying. I don’t want to live in a world where we have spicy Starburst and Skittles. Spicy Mega Warheads were already crazy enough but they were created as the first test of pre-crime. If you willingly bought and ate multiple spicy Mega Warheads, you have been on a government watch list since the moment you placed that vile candy in your mouth. Spicy fruit candy is disgusting. Trash. It’s the worst edible thing on the planet. Donnie wouldn’t even subject his taste buds to that shit on an episode of Whoa That’s Weird. Any brand turning to spicy candy is basically waving the white flag.

And the saddest part of all this is how Starburst broke bad. Unlike that monster KFC, I believe that Skittles’ true rival is Starburst, not M&M’s.

I’ve always been a Starburst guy instead of Skittles. It’s just a much better candy. And I lost any shred of hope or respect for Skittles once they changed the perfect harmony of their old school red bag by going from lime to green apple. Now that green apple taste overpowers everything else. But Starburst going with a spicy flavor is like seeing your bad kid turning your good kid into a criminal. A sad day for Starburst fans around the planet.