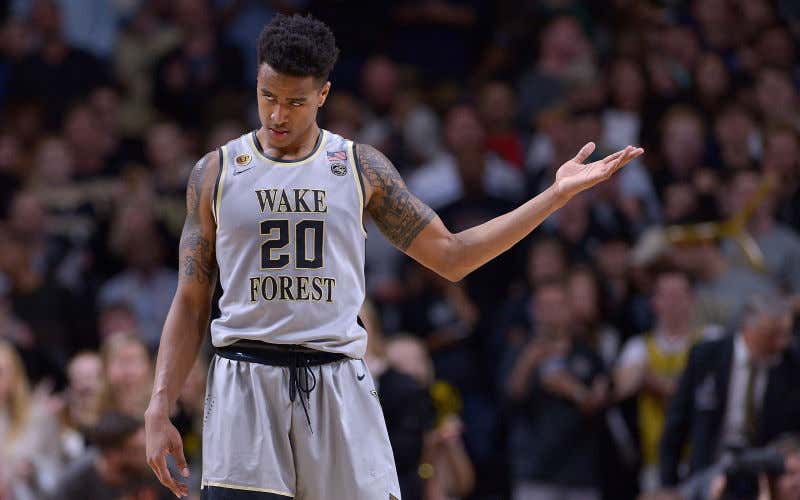 Background: There are a few ACC players in this Draft that made the jump from freshman to sophomore years that people expected. Guys like Luke Kennard and Donovan Mitchell were supposed to do that, however, it was John Collins who perhaps blossomed the most. The 6’10” sophomore was arguably the best scoring big in the country last year as he averaged 19.2 per game (up from 7/game as a freshman). He was by definition a true post player in the sense that the majority of his points came in post up settings per Synergy as he also developed a nice jumper with his face up game. He’s an incredibly young sophomore as he won’t turn 20 until a couple months after the Draft, giving teams the ability to develop him, especially on the defensive side of the ball.

Strengths: You have to start with his post up ability. He’s an extremely effective scorer in post up setting as he scored 1.024 points per possession this past season. It’s where he’s the most comfortable as he spent 45.6% of offensive possessions in this set. He’s fairly balanced in terms of what block he prefers to catch the ball on, though he leans to the right block just slightly. Out of the 220 post up sets in which he was single covered he had 78 possessions on the left block and 129 on the right. While it’s still a 58/42 split, it’s more balanced than most of the bigs at his level. No matter what block he catches the ball on, he wants to go over his left shoulder. He does have an excellent feel to where the defender is as he catches the ball and makes a quick first move. He tends to put the ball on the floor for a dribble to get in position and has a strong hook shot when he’s playing with his back to the basket. On top of that he’s able to make shots at different angles thanks to his body control and development shooting. Offensively, Wake ran a system that put Collins in a couple different places on the floor. When you watch the clips, most of the time he starts up top setting a high ball screen before diving to the post. From there, they run a little bit of a flex offense, with screens on Collins defender to help get him open. Watch in these clips how quick he is at making the first move, something that will translate to the NBA.

Collins has a nice touch to his shot and is a good free throw shooter for a big man. He upped his FT percentage to 73% this past season while also developed that midrange face up jumper that he started to use. He does need to extend it a little bit more, but reports came out that he shot 16-for-25 from the 3-point line in a drill earlier this month. If that’s the case, he will immediately challenge Zach Collins as the most polished big in this class. He does have good form on his jumper, which shows he should be able to develop more range. It’s very fluid and not funky looking, which makes it easier for teams to work with him. He doesn’t fade when he shoots his face up jumper either, again a step in the right direction. On top of that he’s quick with his movements, similar to how you see in the videos above with him in the post. He keeps the ball high and likes to utilize a jab step to create space and stay in rhythm for his shot. I expect to see him use this face up jumper more in the NBA as he’ll have more space as well.

Finally, he is an excellent rebounder, on both sides of the ball. His per-40 of 14.8 rebounds per game is a pretty remarkable number. Overall he grabbed 200 defensive rebounds this past season while also getting 124 offensive boards. He has decent size at 6’10”, but with a smaller wingspan, it shows that he’s great at getting in position and holding that position to get the glass. He’s an athletic big who likes to rim run and crash the boards, which leads to points due to his ability to keep the ball high and finish putbacks. He graded out in the 64th percentile nationally this season with 1.17 points per possession on putbacks while scoring over 60% of the time.

Weaknesses: As I mentioned, he doesn’t have a great wingspan for his size. He measured with just a 6’11” wingspan, which for his height isn’t ideal. He’s going to be looked at as a small-ball center, especially if he doesn’t truly develop a jumper, which means he needs to become a better defender. He’s a decent shot blocker at 2.4 blocks per-40, but he gets in foul trouble quite a bit. He had 4.5 fouls called on him per 40 minutes last season and a large portion of that is due to him getting isolated in dribble penetration. If he had a quicker big or switched onto a guard, he was completely lost and often left grabbing at a jersey and picking up a couple quick fouls. He needs to work on foot speed and defensive awareness to avoid this problem in the NBA. The other problem defensively is he’ll bite on ball fakes, leaving his feet and going for the blocked shot. Couple that with playing too upright, he found himself with two fouls in the first half way too much for a guy as talented as he is. Part of it also could have been the system he played in as Wake was just a bad defensive team and wanted to run up and down the court, beating you in transition. On the offensive side, he needs to be a better passer out of the post. He had assists rates of 3.5% and 4.5% during his time at Wake Forest per KenPom, which means he can get shot-reliant in the post.

Draft Stock/Projection: There’s going to be a run of post players in the late lottery, where John Collins will find himself. He’s lumped in with Justin Patton, Ike Anigbogu and Jarrett Allen right in that 13-20 range, depending on what each team wants from their post guys. If he continues to test well shooting the ball, to me it’s a no-brainer to take him first in that group of four and as the second big behind Zach Collins. He’s someone that can be in the rotation as a rookie, especially as your third big who can provide scoring off the bench. He’s not going to develop defensively right away, as that’s one of the toughest parts of the game to grow, but being just 19 years old, teams will be willing to work with him on that.