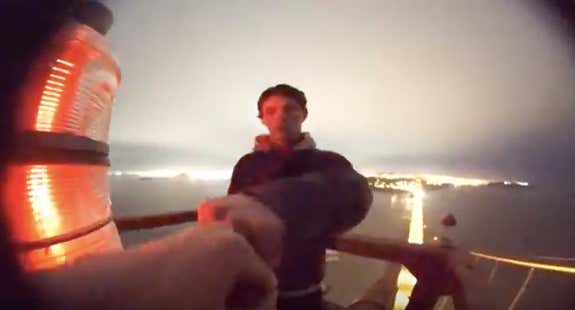 According a local ABC affiliate, the duo managed to pull of their stunt by driving off to the side of the bridge, then shimmying up its suspension cables that ran to the ground. Once they got to the top of the bridge’s tower, they started doing somersaults and hanging of off the edge of the beams, naturally filming the entire thing before posting it online.

In a statement about the incident, which happened back in April, the Golden Gate Bridge, Highway, and Transportation District said the whole thing “raises questions about how such an unauthorized climb was possible and the potential harm to drivers, pedestrians, bicyclists, and the climbers themselves.”

Teatime and Rector, who are now back home in Milwaukee, could still face misdemeanor trespassing charges and up to a year in jail, according to ABC 7 News. But one of the climbers thinks he’d be more valuable to law enforcement as a consultant.

You went somewhere you weren’t supposed to? So cool! I wonder if they know the only reason people watch their videos is because they want them to die. Not in a mean way, more in a ‘that’s what you get’ way.

“They started doing somersaults and hanging off the edge of the beams, naturally filming the entire thing before posting it online.”

Okay fine, maybe in a mean way. Hanging of the edge and doing somersaults significantly boosts their hateablility rating. I’ve seen every ‘guy climbs high thing’ video and nothing ever happens. I should know better, no one would post a video of their friend falling off a bridge. It’s not even like they accomplished anything hard. They jumped over a fence and walked on a slight incline for a few minutes. My grandmother could do that and she’s not even alive.

The Golden Gate Bridge, Highway, and Transportation District Authorities can kick rocks. That and then change their name, it’s way too long. It’s a harm to drivers, pedestrians and bicyclists? How? The only way it would be harmful is if someone fell AND landed on a car/person. That seems highly unlikely; the only time that’s ever happened was in Con Air with Nicholas Cage.

If they haven’t been charged with a crime by now they’re not going to be. Even if the police do press charges at least one kid has his bases covered. Asking to be brought on as a consultant in lieu of being arrested is a brilliant move. I don’t think they can say no to it either. Want to stop a crime? Simple- ask a criminal, makes sense to me. Although it is a dangerous precedent to set. Can’t have rapists and murders pulling to consultant card.