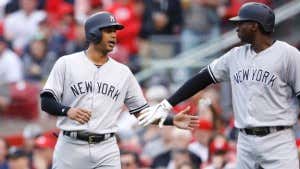 After this weekend’s series a lot of people were concerned and a lot of haters thought the Yankees were exposed. As you can see from 29 hits and 18 runs in 2 games, everything is going to be just fine.

Coming out of the Houston series I said the Yankees had 13 straight games against bad teams coming up, starting with The Royals, and would need to capitalize on this part of the schedule to lengthen their lead. Losing to a team you will have to go through in the playoffs is never a good thing, but you get ready for the playoffs by beating up on bad teams and figuring out everything thats wrong. Our offense hasn’t really been “bad” at all this season but against some of the Astro’s pitching it looked like we couldn’t compete against top line pitching. Then came Jason Vargas and his league-leading 1.01 ERA, and the Yankees knocked him out in the 4th.

Gary Sanchez had another multi-hit game last night, showing that his rookie form is returning. Him rebounding after the DL stint at the beginning of the year was so key not just for the on-field aspect, but also for team morale. Aaron Hicks hit his 7th home run of the year, which is 6 more than I thought he would have at this point of the year. When looking at building out the future of this team, Hicks is going to play a big part because he gives us lineup flexibility or could be a trade piece in a package for a starter.

In keeping up with our continued coverage of Chris Carter, he got lost and ended up on base again last night. Then he did his best impression of the Barstool Basketball team on a fast break.

Tonight Jordan Montgomery goes for the sweep against Danny Duffy, who is very hittable. Over the last 3 years Duffy has an ERA above 5 against the Yankees and with today’s team we bat .278 but have 4 home runs and 7RBI. Getting to Duffy early should give Montgomery confidence to go deep into this game without having to labor as much. Getting a solid 7 inning start out of our rookie 5th starter would be huge, given our recent bullpen issues.

PS: Starlin was such a great pickup.