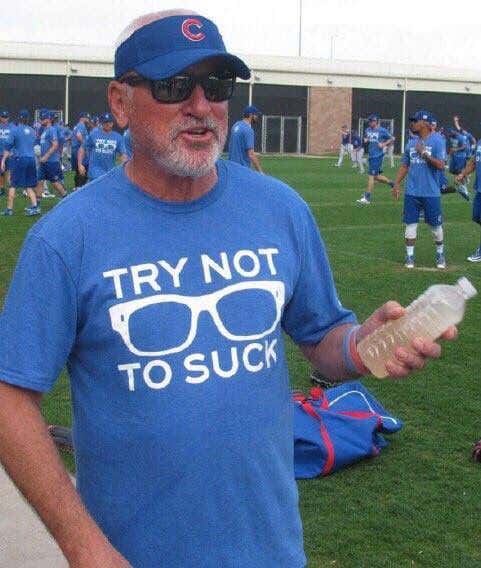 I’m not complaining about the Cubs. That would be super unpopular. So let me be clear: the Cubs don’t suck.

Rather, the Cubs are:

But they definitely don’t suck. Those are just facts and numbers. I’m not saying anything about how those facts and numbers apply to the first 25% of the season because that would, again, be unpopular.

Comparatively, if a defending Super Bowl champion were 2-2 with questionable play on both sides of the ball, what would the narrative be?

The narrative would be that the team needs to get their goddamn shit together. Not tomorrow. Not by week 8. But today.

Fortunately, this is baseball. And there are A LOT of games in baseball and ZERO asshole football coaches barking at everyone about things like consistency and effort. Another advantage baseball has, and in particular this Cubs team, is that it’s predominantly run by good, solid, ivy-league-educated, level-headed guys that get it and see the big picture. Thank god. Because simple minded guys like me have the tendency to jump to conclusions. Like when I watch an uninspired, lackadaisical (apparently that’s how you spell that word btw), and sloppy baseball for 37 games, I’m naturally inclined to conclude that there could be some problems. But then I hear leadership get on the air waves and remind people that there are ups and downs to a season, and that nothing should be gleaned from the ups and downs that have presented themselves thus far. Everything is fine.

Which kinda makes me scratch my head. Like I get the team is solid. Roster is loaded. One of baseball’s best managers, and best core of emerging superstars and all that stuff. But the funny thing is this is sports and you actually have to go out do it – whatever it is. Like you actually have to be good, to act like you’re good. And since the team hasn’t played well for 25% of the season, then I think it’s fair to say that the everything isn’t fine. Not right now. Not while the Cardinals are winning 18 of 24.

I watched Kyle Schwarber swing, miss and fall to a knee TWICE in the same at bat yesterday. I’m fairly sure Rizzo’s arm is broken and he’s too tough to know it. I don’t know why Addison Russell isn’t stroking line drives. Baez is back to the defensive miscues that made people doubt his long term value in the first place. Contreras has called a mound visit every other hitter since the season started. Zobrist looks like a scarecrow in the outfield. Montero has publicly said that certain people are taking things for granted in the clubhouse. Brett Anderson has been a disaster in 6 starts. Jed Hoyer commented last week that it was seemingly uncharacteristic that Brett Anderson would be this ineffective. (Worth noting that Monty has been electric out of the bullpen this season.) The 2-out hitting has been laughable. The starting pitching is slow out of the gate almost every single time. And the sincere lone bright spots consist of a solid bullpen and a very steady start to the season for Kris Bryant.

In other words, I’m trying to figure out this team. In the process, I feel like I can’t actually complain about it. Like that’s taboo to complain about this Cubs team as if it’s some for sure, slam dunk thing that a dynasty exists that will be in the WS for the next decade. They’re good enough, yes. But that’s not how it works. You actually have to go out and do it. Right now they look like shit. I don’t know if that will be the case in July and August because it’s not July or August. It’s May. And all I know in May is what I’ve learned from the first 37 games of the season, and what I’ve learned is that the Cubs need to clean it up. Big time.