As the story goes, for the past month or so we’ve been in correspondence with the good people at Avenged Sevenfold for Barstool Gametime. They reached out saying the lead singer M. Shadows is a Stoolie and a gamer so why not try and make a match made in heaven for the sake of content? The plan was to get dressed up like I’ve been a cashier at Hot Topic for a decade, go backstage with the bands, stream some video game action on Twitch, get more behind the scenes access stuff, and overall rock out with our heavy metal cocks out. Pretty much the easiest, and most fun videos one can make that would be great for Barstool. What can go wrong? Oh, that’s right. God can take notice I have a possible successful thing going on and unleash a Golden Shower from the clouds…

Cute. Super cute. And you can’t even be angry about the dude’s wife going into early labor because it’s a blessing from above and all that happy horseshit. Just gotta chalk it up as another loss, and unfortunately the L’s are starting to pile up.

I fear that I am currently cursed by a higher power. Ever since the great Mario Kart victory of Halloween ’16 where #DriftSmittyDrift conquered #ColeyTheMick, we’ve been a losing streak of somewhat epic proportions. We’re talking a streak of L’s nobody has seen since the prime of Sixers tankage, and I have no idea how to break the spell. I would sacrifice a virgin to appease the Gods, but all of a sudden we need Nate around for the Noogies (BOOM! Roasted). Here’s a few examples of recent L’s that are already in the books:

Smitty Vs. Clem in Madden – Loser goes vegan for a week.

L. Went in as the underdog and got dragged through the goddamn hummus.

Smitty Vs. Tex in NCAA Football ’07 – Loser Gets Tased.

L. This one was tough. Even though I knew Tex was better at NCAA, how could I fall? I mean, the only bigger loser in the history of the world at that point was Glass Joe – And he was fictionally created specifically to be a loser. So, yes, that one hurt. Both physically and mentally.

Hey, at least Barstool recognizes the length one of their own will go through for the sake of getting eyes on the brand. We don’t just throw it out there and basically imply random dude who blogs for some generic site from his Mom’s basement got electrocuted.

Currently 0-4. All heart, just no real talent. But at least my efforts for the idea and spearheading the cause will be seen when the video series is released in 2047.

Smitty Vs. Nate in Poker

L(ish). The Gremlin is techinaclly 2-0 in the two nights of Barstool Poker Night we’ve played on Barstool Gametime. I said it before and I’ll say it again, Cards don’t lie. Neither do coin flips, and unfortunately in life recently every time I call heads it comes up tails. Also, I’d pay someone to statistically go through every hand we’ve played to see who the actual better player has been – See All Hands Here. Last night came down to Nate shoving like the Lord Of The Donks with J-6 for no reason and me calling with a healthy 88. Naturally, the lesser species won.

Addition by subtraction? Kidding, but for real I thought the show had something going for it, especially with the subject matter. But you can’t win ‘em all. Or any, I suppose.

This one hurts the most because it actually was a good, no, great product that was pretty much unanimously enjoyed by those who tuned into the program. The highlanders would come down from the hundreds, and thousands to listen to the show (once it was up on Soundcloud and iTunes, even though nobody, including myself, knew when/where/how it was going up – RUNNING THEME: I am less than shit when it comes to knowing how to promote and maximize myself/shows). Unfortunately, a morning commute show on a platform designed specifically so can’t exactly listen to on your commute resulted in the live numbers being erratic. Plus with the golf guys taking off and playing with themselves on vacation every week, it’s tough to get support for another opportunity going forward (and that’s not a knock, I don’t blame them one bit as I’d do the same thing). Just gotta chalk it up as another L.

This isn’t a pity party by any means. I don’t want people to feel bad for me. My life is great. Trust me, look at this sad, tortured, hungover beyond belief soul struggling not to stab himself in the heart with corkscrew pasta at the farmer’s market: 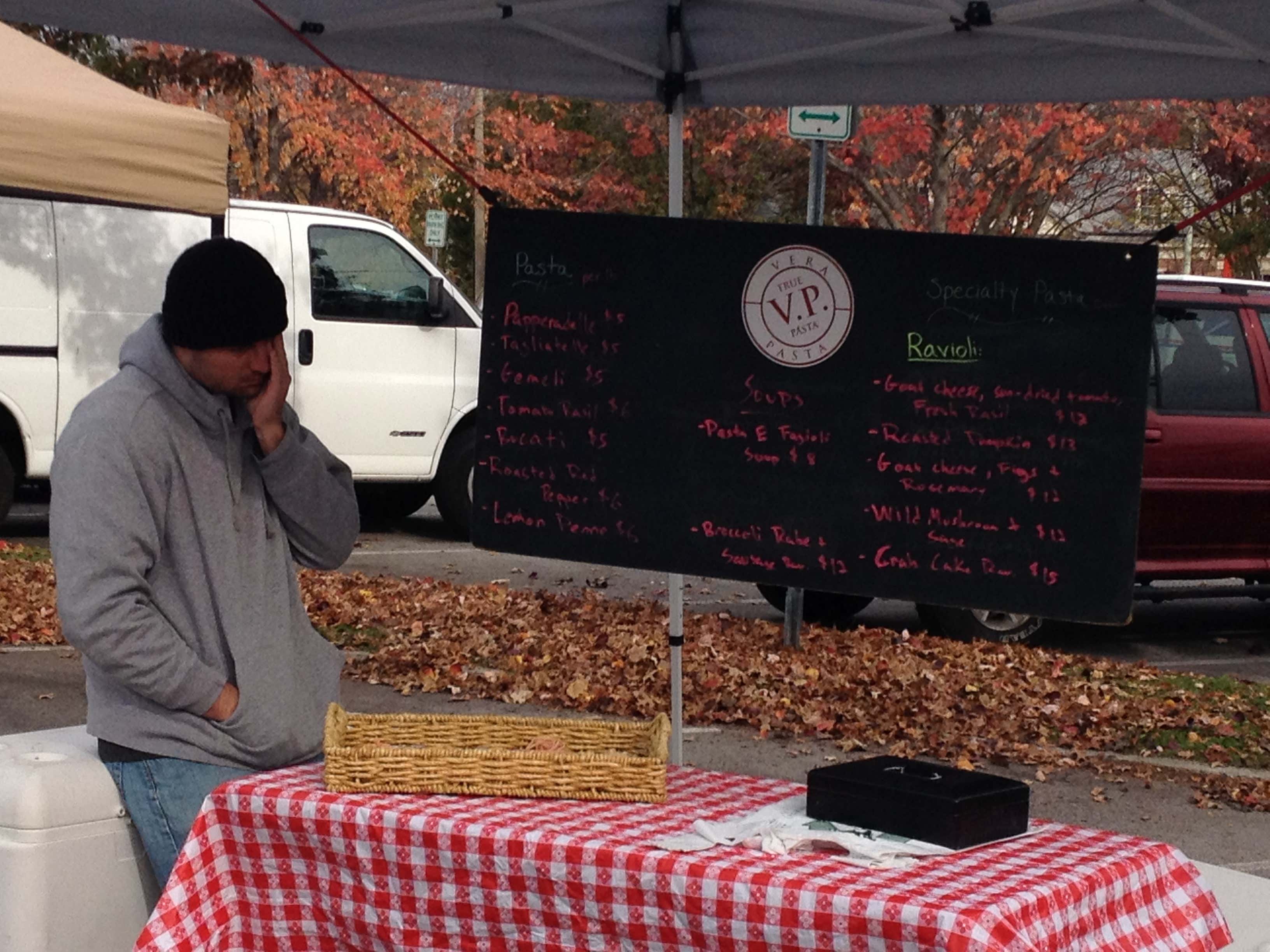 I’m coming up on 6 years since I published my first blog on Barstool. Again, life is great and things are just fine. But as a competitive being to the point where I struggle internally allowing my 3-year-old niece win in Candyland, these L’s take a beating. I just have to bide my time, and my Kevin Malone moment will come. It’ll be nice to win one.