Here it is, folks. Just one game on deck today and it promises to be THE MOST EXCITING MADRID DÆRBY IN HISTORY* – get pumped.

But first some babymaking music to get you in mood:

Scores and schedule from the semifinals: 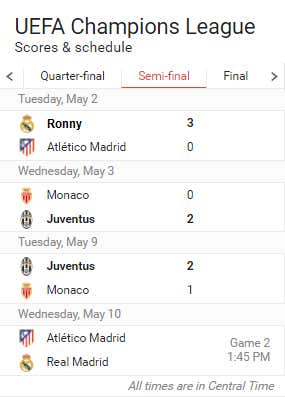 UCL semifinals are only played just 6-7 days apart, which makes writing previews pretty simple. Both clubs are in more or less the same form as they were last week, with the only differences being any injury/suspension-related adjustments and of course the change of scenery – which in this case means driving 4.3 nautical miles across the city of Madrid from the Santiago Bernabeu to the Vicente Calderon. 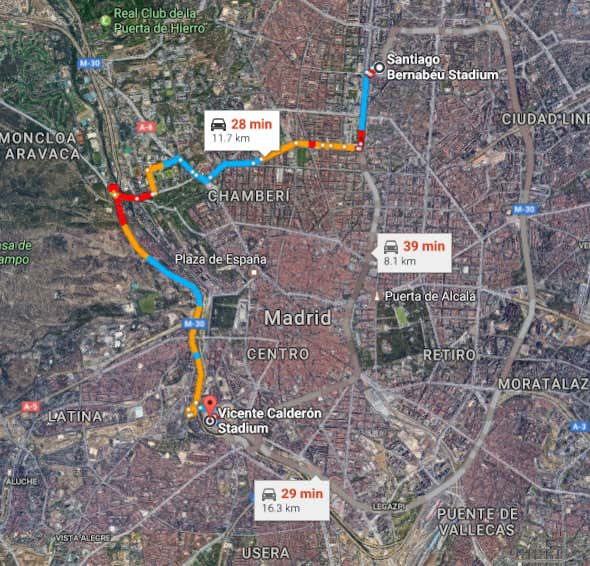 Neither of the XIs will likely look too terribly different this time around, so if you are hoping that I have some sort of secret rationale for why Atleti might just shock the world and move on, welp, prepare yourself to be letdown. Down three goals means the home side is going to be out of their comfort zone from the very start in that they will have to push forward. That is not what this team was built for, and an aggressive game plan means it is just as likely (if not more so) that Real’s quick strike offense has a field day.

Diego Simeone made a big mistake in the first leg by starting Lucas Hernandez at right back, so chances are he will move the left-footed centerback back to (gasp) centerback and start Stefan Savic in his place on the wing. Sad to say though that if that move is your biggest “ace in the sleeve”…. yikes, could be a tough day.

[Sidenote: Zidane will no doubt go with Benzema up front per usual but I would love to see Alvaro Morata get more run. The fact they have a guy like that who is often on the bench (along with James Rodriguez) is a nice reminder of just how ridiculously stacked a club like Real is.]

Either way, Atleti needs to grab an early goal in, let’s say, the first 15 minutes to set the tone or I’d go so far as to say this puppy – as defined by which team will be moving on to the UCL final – will be just about over. Just seems like too big of an ask against a club with as many weapons as Real, especially with our boy Ronny dropping loads more often than when he was dating Sepp Blatter’s ex. 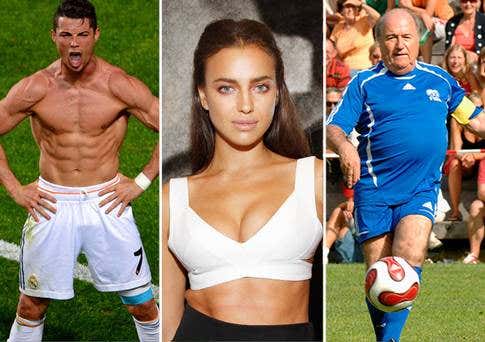 Point being, I don’t see it happening. But that doesn’t mean we can’t all get rich by taking advantage of the tastiest odds and going with the 2-2 draw (or the over if you swing that way).

There we have it. Biggest game of Deal Leader Jozay’s season coming up tomorrow. Get pumped.

Note: I haven’t played competitive soccer in eons and yet plays like this still chap the hell out of my ass