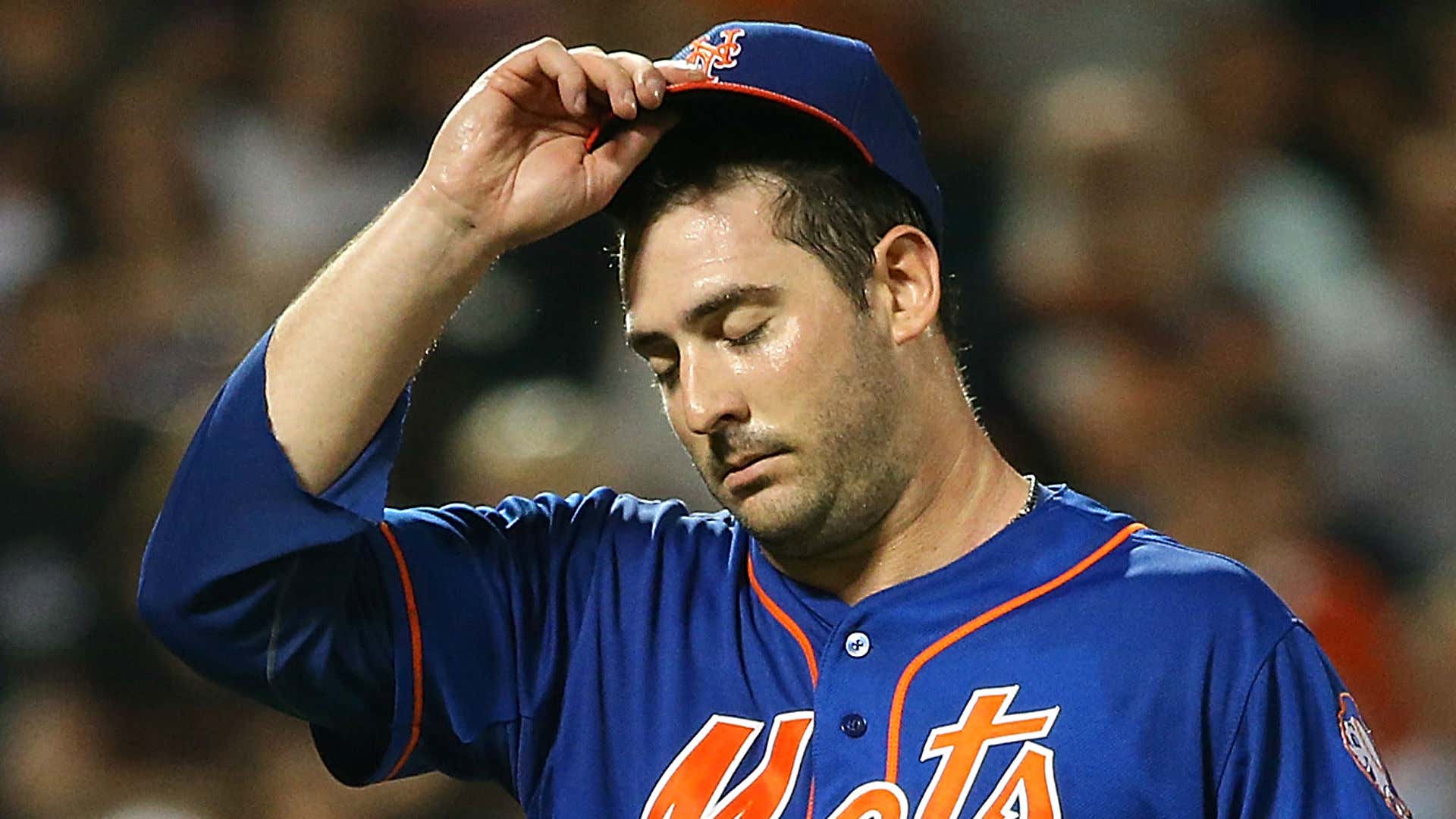 NY Post – The night before he went AWOL from the Mets, pitcher Matt Harvey was partying into the wee hours at a Meatpacking District hot spot, sources told The Post. The “Dark Knight” was celebrating a late Cinco de Mayo at 1Oak until 4 a.m. Saturday — just hours before he failed to show up for a game at Citi Field, reportedly because of a “migraine,” sources said. Harvey — who makes $5.1 million and is 2-2 with a 5.14 ERA this season — rolled up on the velvet rope club “with his boys” at about 1 a.m. and settled into a private table, the sources said. The star pitcher threw back a triple play of top-shelf booze, including Armand de Brignac “Ace of Spades” Champagne, Don Julio 1942 tequila and Belvedere vodka, witnesses said. Harvey and his entourage kept to themselves until leaving the West 17th Street club, sources said. What happened the rest of Saturday is the subject of debate — with MLB sources and Harvey’s camp spinning different versions. Mets manager Terry Collins first noticed his pitcher’s absence as the Amazin’s took batting practice at Citi Field around 4:30 p.m., sources told The Post. Harvey, 28, was not slated to pitch, but was still expected to be at the game, so Collins asked pitching coach Dan Warthen to telephone him. The coach got no answer, baseball sources said.

Saturdays Are For The Hamptons 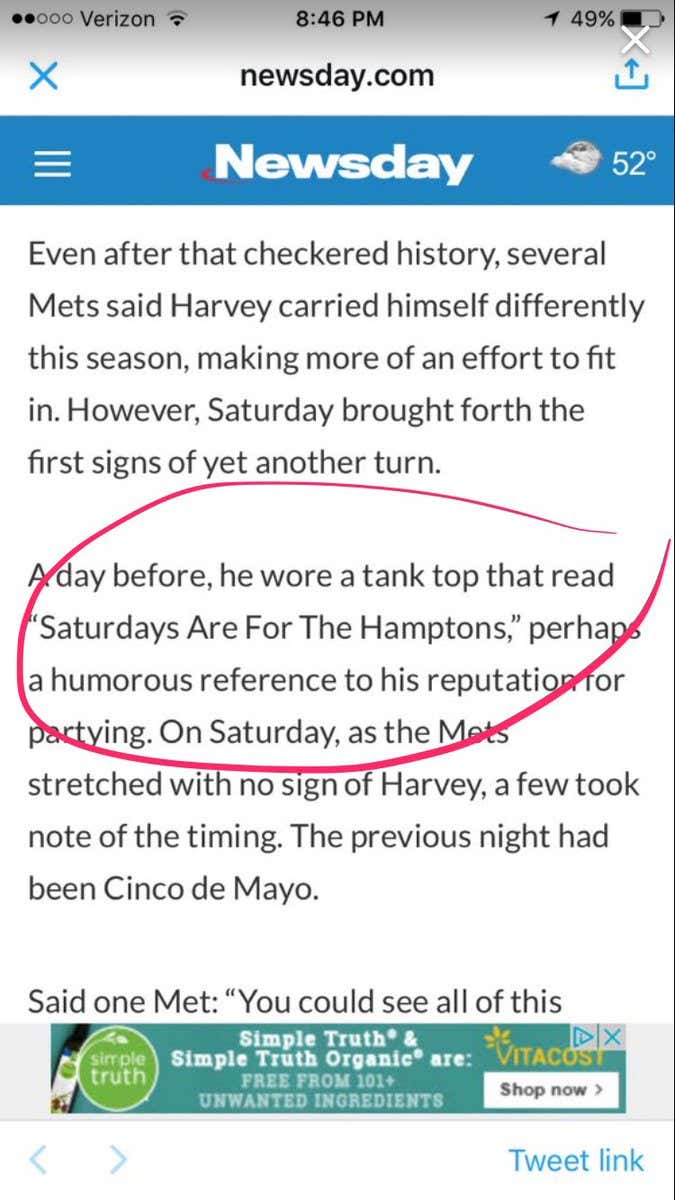 ESPN - The New York Mets performed a welfare check on Matt Harvey when the starting pitcher didn’t report to Citi Field on Saturday, according to multiple reports. According to the reports, Harvey’s absence was noted Saturday afternoon and personnel were sent to his Manhattan apartment around 10 p.m. ET.

And the Matt Harvey Saga rolls on. As dramatic, as cliche, and as fucking Mets as it gets.  First things first, would have loved to know that Matt Harvey was running around rocking our gear before I called him an asshole, a chick, a diva, a douche, and proclaimed I was hashtag done #done with him:

Our merch guy Chip sent me over his order confirmation and was like “I saw this a couple weeks ago. Didnt think it was the real Matt Harvey.” It was like a 500 dollar order of shit. Whoops! Sorry. But hashtag done is like a Cuncel. There’s no going back. So, thanks for wearing the shirts but I said what I said.

And I’m doubling down here because you’re definitely an asshole if you’re at 1Oak for Cinco De Mayo. I mean grow up, Matt. Cinco de Drinko, dude! Just grow up. As with anything else in life, you wanna party all night long, go for it. Make all the bad decisions you want. Booze, drugs, pussy, all the vices. But you have to make it to work. Showing up to class, showing up to work, showing up to your 5 million dollar job as a fucking pro baseball player – its all half the battle. This dude Matt Harvey couldnt make it to the ballpark ON A DAY HE WASNT PITCHING. He needed to make it to the stadium by like 4 fucking PM. You know how many baseball games I’ve just “gone” to hungover? ALL OF THEM. Just get to the park and sit there hungover like every baseball player ever did in the 80s. To shoot yourself in the foot like this on a fucking off day is INSANELY stupid.

Also a couple other things – how fucking terrible do you think Matt Harvey’s crew of club boyz is? “Rolled up to the velvet rope with his boys” PUUUUKE. Bunch of Patriots fans Yankee fans from New London rolling up to 1Oak like the actual Mean Street Posse. Like Sack Lodge and his friends from Wedding Crashers. Just walking through the club going “Sluts, man!” Worse than Kershaw’s crew.

Last but not least, the Mets with a goddam Welfare Check. I dunno if thats standard procedure. Maybe it is. Maybe they just sent some clubhouse guy to his apartment like “Go wake up drunk ass Matt” and that needs to be officially reported as a Welfare Check. But all I know is its the most dramatic terminology ever. Makes everyone look like an asshole. Like the Knicks with Derrick Rose. Dont even know where their own players are. Might be dead! Might he hanging from the ceiling! Thats how bad Matt Harvey wants to be a Yankee! Just more perception problems. Worst PR in sports. They have won 7 out of 10 and are still a walking circus because of their inability to control a story.

PS – If this is Lima related, thats such a goddam chick move. We used to think Harvey would win a Cy Young now he cant win a Break Up. Going out till 4am and missing work over a chick is soft. I bet he danced on tables too.