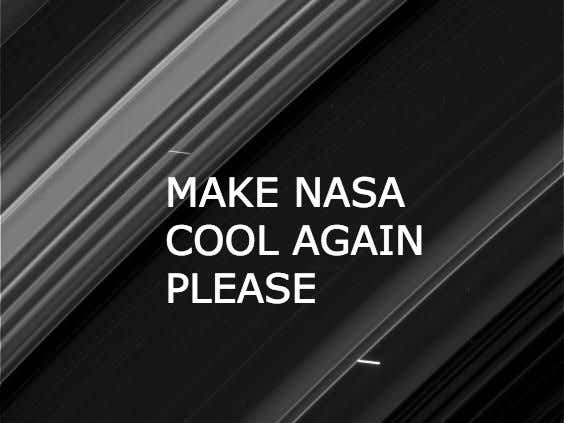 The Independent — Cassini has sent back images from its second stunning dive through Saturn’s rings. And they’re even more beautiful and eerie than before.

The dive was one of 22 journeys the spacecraft is making through the rings as part of its “Grand Finale”. That will end in September when engineers fly the craft into Saturn’s atmosphere and destroy it…

…But before its fiery end, Cassini is going to send back some of the best pictures we have ever seen of Saturn and its stunning rings. And the new images more than fulfil that brief…

…“The images from the first pass were great, but we were conservative with the camera settings. We plan to make updates to our observations for a similar opportunity on June 29 that we think will result in even better views,” said Andrew Ingersoll, a member of the Cassini imaging team based at Caltech in Pasadena, California.

How fucking lame is NASA? Hey you idiots, stop swimming around in Saturn’s rings for black and white photos and put somebody on Mars. Or find life. That’s all we care about — Mars walkers and life. Who in their right mind gives a flying fuck about black and white pics of Saturn’s rings? We’re aware of the ring situation. We know what they look like. Ever heard of a telescope? Galileo saw that shit in 1610. Four hundred years later and NASA’s all jacked up over this? Embarrassing. The last few decades for NASA: one small step forward, one giant leap backwards.

Pure crazy town that we’re still taking black and white photos. Can’t send an iPhone up there? Also, how about this move:

[The Grand Finale] will end in September when engineers fly the craft into Saturn’s atmosphere and destroy it — necessary to ensure that any life that attached itself to Cassini doesn’t populate other worlds.

WHAT!? Maybe the cockiest and dumbest logic of all time. “Hey we can’t find life which is the only reason we exist but it’s probably going to flock to our black and white spaceship camera so let’s make sure we kamikaze it into Saturn to save the other planets.” Yeah ok NASA. Houston, you’re DELUSIONAL.