Over the past two weeks Amercan basketball has been taken by storm by a loud man with a talented son- essentally the polar opposite of the Rivers family- the Balls. And just like most pairs of balls sometimes there smooth, but sometimes they stink. From now untill the draft I will be keeping track of the set of Balls and how there hanging in there. This week-

Smooth Balls: LaVar Ball coud very well be the best businessperson since Oskar Schindler. Schindler helped alot of kids with limited skills that he didnt have to pay just like LaVar and enriched himself while nomnally helping them. Ball is actualy more effecient than Schilndler because his employees- his sons in this case- are thoroughly screened and vetted. Also LaVars doing everything within his power to get his kids drafted- much more patriotic. People also think Ball is polarizing- similarly people only view Schindler in black and white.

Stinky Balls: LaVar could take a page from the Manning family and not meddle with his sons future draft stock. Some team’s are considering avoiding Lonzo like the plague just because there scared of his dad.

There are a couple major differences between sports in America and this is case and point of how this type of shenanigans would never fly in the NFL. Just imagine for one second Archie Manning turning himself into the storyline on the eve of the biggest day of his sons life. Maybe even going as so far as to try and steer certain franchises away from his son so he coud get drafted into a more historic franchise is a larger media market. There would be uproar galore and everyone would rightfully give him shit about it for the rest of his life, but of course that would never happen with a classy famly like the Mannings. 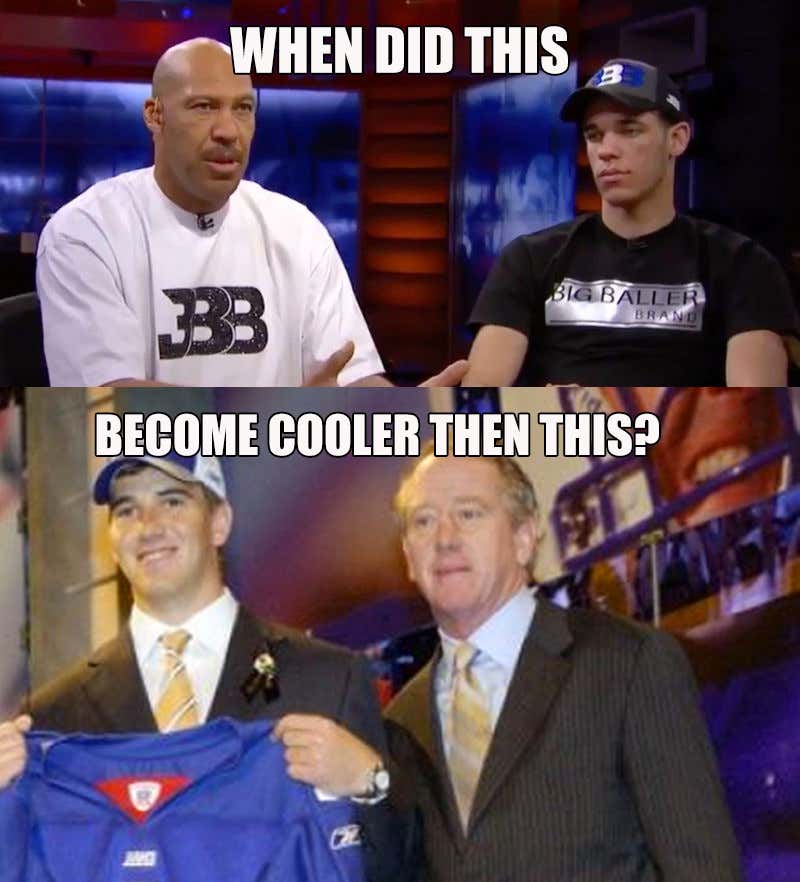 All that said, its a disgrace that he’s selling his little shoes for $495, when kids can go out there and buy perfectly good Lebrons for the reasonable price of $200. Why waste your money on shoes when you can invest in a 2nd playstation for your bedroom and save a bunch of money on a engagement ring. 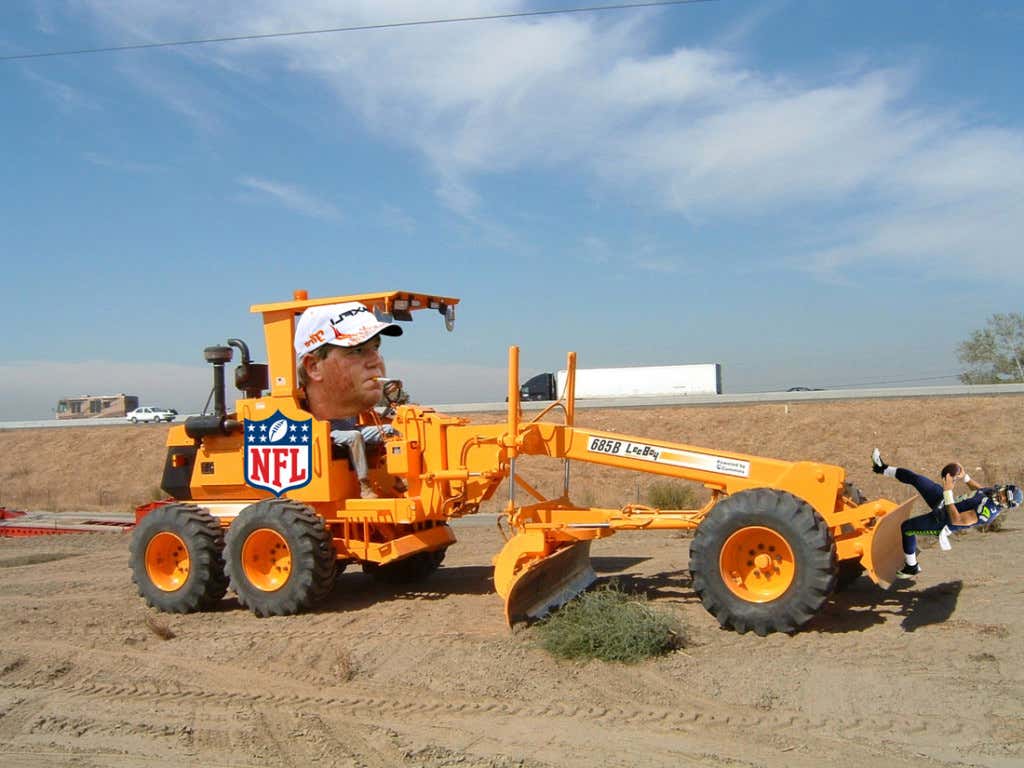 Daly is a football guy trapped in a golf guys body trapped in a football guy. It just goes to show you that actualy a lifetime of ripping heaters, chugging miller lite and diet cokes is more healthy for you then doing weightlifting and pretend-enlisting in the Navy SEALS. Who would of thought that Daly would of had a longer, more robust career then Tiger Woods? This is why goverment nutrition is a crock of shit. Tiger Woods grew up on the food pyramid- which shout out to Ben Carson, emphasizes eating carbs and breads. Daly however grew up on the modern equivlant of the mediterrainian diet consisting of pizza, marlboros, and public nudity. Instead of mixing up all sorts of nutritonal powders Daly was slamming diet coke, snorting the real thing, and the closest he got to the jack-booted goverments pyramid was that his nasal cavity closely resembles the sphynx’s.

Let this be a lesson to all the youngsters out there- you know your body better then the government does so when Mrs(?) Obama tries to sell you veggies and fish you go right ahead and trade them for a shit load of gushers and lunchables, and one day you might be able to dominate a physically exerting sport like golf.

1. The Penguins knitting lady took the world by storm on Saturday night. There were alot of ignorant sport’s fans out there who had never closeley paid attenton to Pittsburghs seldom seen Madam DeFarge but now everyone is obsessed with her. She says she knits because it keeps her calm during emotional games but how come when I drink alot of beer to steady my nerves I get thrown out? Just goes to show you the tremendous double standard that everyone loves it when a woman brings needles into a game but when I bring sharp objects in its a parole violation. Anyways, the Caps are going to win tonight and then break my heart on Wendesday so please inform the knitting lady to put my initials on her quilt.

2. Demar DeRozen said that if the Raptors had had Lebron James they would of won their series verse the Cavaliers which is like saying that if the United States had Hitler we would of installed concentration camps and briefly embraced eugenics, and got into a protracted military conflict with Russia. Can we all just imagine how many days off Lebron would take if you gave him free medical care? Its a problem now, but it would be a crisis if he didnt have the invisible hand of the market keeping his pocket book away from the ER every now and again.

3. If your not mad about Riley Cooper situation down in Tampa Bay then your not paying attention. Cooper would fit in in Tampa where he would have a natural support staff of Hulk Hogan to navigate himself through the tricky waters of how to sue the website that published a tape of you saying the n-word into oblivion. Kind of makes you wonder how come everyone threw the book at Riley Cooper even though he said that hes normally not that person that you saw on the video tape yet we believe Adam Jones that the racist guys  in Boston were there even though theres no videotape.

4. The Buffalo Bill’s are about to hire Brandon Beane as there GM and implementing Beaneball or Moneybill into football. Beane is currently the Assitant to the GM in Carolina where his duties have included inspecting draft picks for tattoos and alienating there best cornerbacks, tasks hes mastered wonderfully. Honestly theres probably not a better job in sports then assistant GM. If you screw everything up you dont get fired because your the up and comer, and if things go great well then, your desired by every other team. Being second in command of a team is the complete opposite of being the second in command of Al-Qaeda- commonly known as the second most danger job in America behind the guy who has to take Andy Reids plate away each time he gets up to grab another round at the buffet.

5. Call me crazy but I think Josh McCown is exactly what the Jets need to push them over the edge to that next level and get them to the overall number one pick

6. Colin Kapernick stepped back into the public eye last week donating sport coats and slacks to recently released inmates going to parole hearings. The only law suit Id be worried about if I were Kapernick is the one he can expect from US Army recruiters for hurting there commission checks with his little stunt. Enrollment is down in the military and many are saying its because celebrities like Colin have encouraged Americans to overthink signing up for service in the armed forces. If the US was filled with people like Colin we wouldn’t of had the forces necessary to be able to go into Syria, Iraq, Bosnia, Iraq, Cambodia, or Vietnam. Peter King thinks Kapernick should be on the radar of league GMs  but the realty is you cant have your backup excercising his first amendment rights and speaking his mind. Kapernick would do well to have sucked a little bit more over the last couple years so he could land himself a lucrative long-term third-string job. Plus I dont think anything hes done has been more disrepsectful to the game of football then any QB coming from a air-raid offense. With the rise of actism across college campuses, schools are doing a disservice to atheletes who come in not ready for the pro-style of shut the fuck up and quit talking about stuff thats not football. Untill we address how colleges are engineering critical thinkers and social warriors, the NFL product of protecting the shield blindly is going to suffer. Sorry but thats just my beliefs.

7. Breaking news Jim McElwain claims that he did not strip naked and mount a shark that he allegedly caught on a boat. But even if it was him, which I truly hope it was, would that be the worse thing in the world? Lets leave aside the fact that allegedly not McElwain was trying to find the blowhole of a shark so he could put his dick into it, but How else are you suppose to show dominance over an animal that you cant eat than by getting nude and sliding your groin on its dorsal fin? Its either hump or be humped out on the high seas, theres simply no other options.

Plus its just good football to have a coach whose not afraid to be unpredictable. Guarentee you Sabans going to be thinking about this picture when its 3rd and short and the Crimson tide has to defend inside there own territory. You have to stay fresh in NCAA football and its better to hump a shark then jump it.

9. As Jabroni Sports point’s out- Tim Tebow has been playing with more pain then anyone could ever imagine and possbly going through stigmata:

10. The artcle also says that Tebow was playing with a torn oblique during spring training after suffering a foot injury during a November game. You know who else battled through bloody hands, and piercing pain in his feet and side? Thats right-

The bloody palms are a bit concerning since Tebows a virgin it could just mean that hes cranking it so much his palms get hairy then cranks it some more and rips them out by there roots. 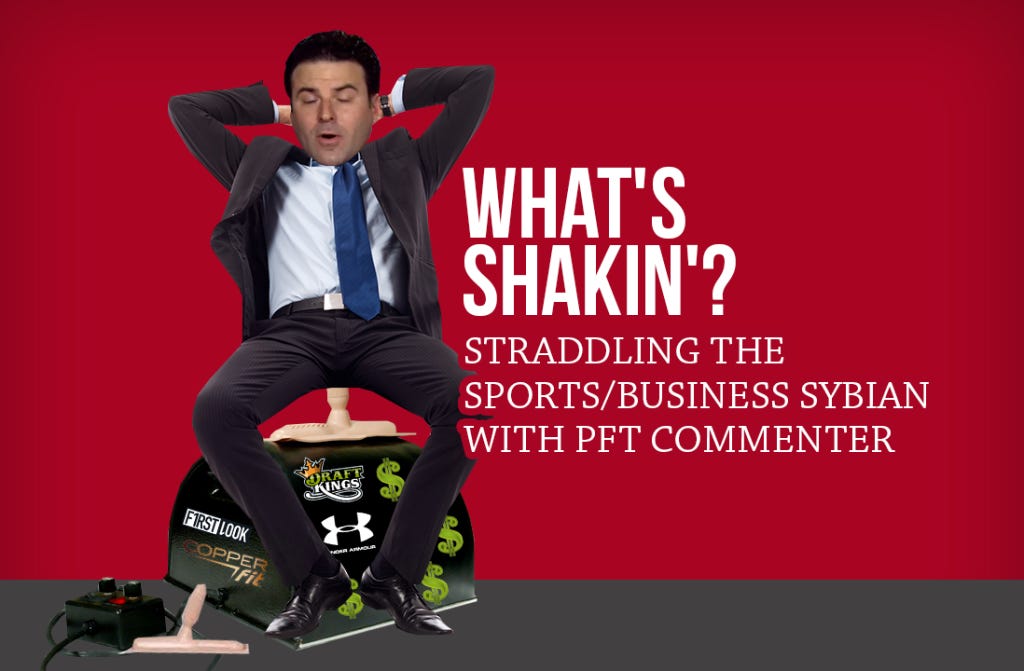