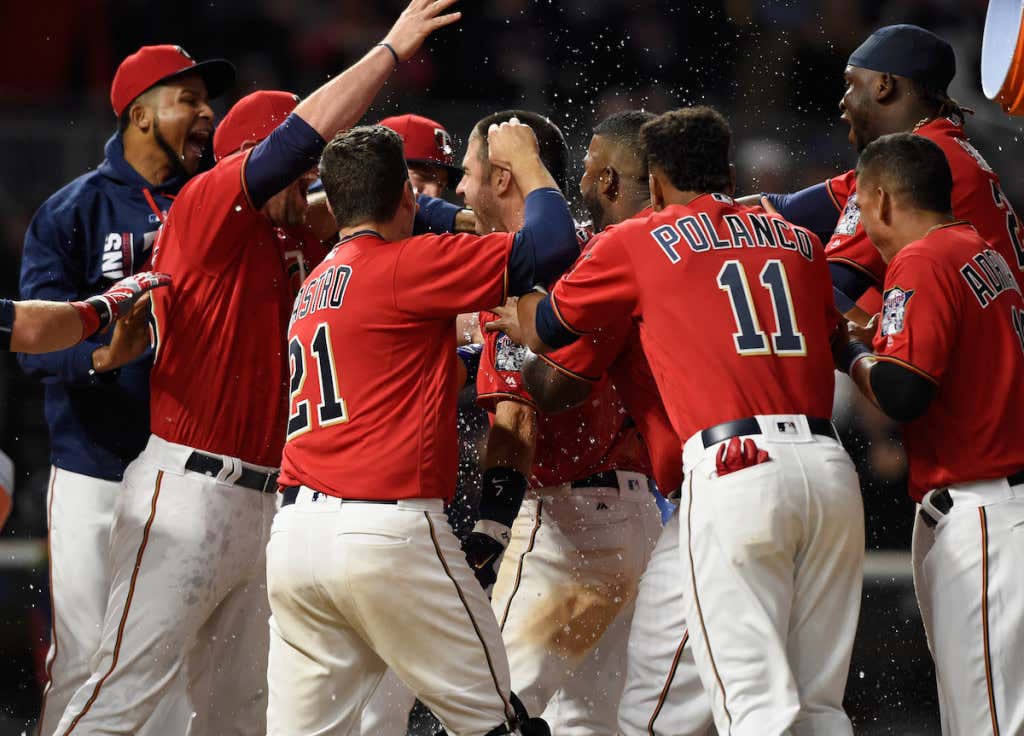 I had this debate with a friend last night, so feel free to weigh in here — would you rather have had the Red Sox just lose 3-1 and avoid the pain of a ninth inning comeback that was immediately followed by a walk-off defeat, or do you prefer what the actual outcome of last night’s game was?

I know where I stand on this, but let’s look at it from both sides. If the Red Sox don’t mount a comeback in the ninth inning, then yes, you avoid the pain, as a fan, of getting all excited about the ninth inning rally, only to have your heart ripped out when Matt Barnes allows a two-out, two-strike walk-off homer to Joe Mauer, a guy that has averaged a home run once every 56.82 at-bats since 2010. That definitely sucks, for sure. But now we’re spending another day talking about the Red Sox anemic offense that only scored one run. Not that scoring three runs is some great accomplishment, either, but it’s more of a sign of life being that they scored two in the ninth to tie it.

On the other side of things, even though they lost, don’t you at least like to see that this team has the balls to battle back late in games? Not only that, but it was Chris Young who drove in the tying runs in the ninth inning, so I love the aspect of not having to rely on the top five hitters in the lineup for everything. You got a big hit from a bench player last night, and the tying run was scored by Josh Rutledge, the team’s third string third baseman, who singled that inning. You have to like that the comeback was largely facilitated by a couple of the little guys.

The counter to that is that if you choose to keep the comeback, in turn, you’re also choosing to keep Barnes blowing the game in the bottom half of the inning. Red Sox manager John Farrell named Barnes the team’s eighth inning guy on April 11. In the four appearances Barnes made through April 11, he had struck out 7 batters in 4.2 innings without allowing a run, two hits and just one walk. Since then, he’s appeared in eight games, thrown 8.1 innings, allowed five earned runs, five walks to just four strikeouts, and seven hits, two of which have been homers. And a suspension mixed in there, too.

With the season-ending injury to Steven Wright and the overall disaster that the Red Sox have had at third base, those issues have kind of overshadowed what could be on the horizon here for the Red Sox — bullpen issues. And hang on one second — before you freak out, yes, I know that they’ve been really good to start the year. The Red Sox bullpen has the second best ERA in the majors (2.24) coming into today, but this is more of a forecasting thing. Who’s your best reliever right now after Craig Kimbrel?

It’s Barnes, right? He’s the eighth inning guy? Well, he’s been on a downward trend here lately. Who’s your next best guy after that, Joe Kelly? Heath Hembree? Ben Taylor? Now you see my point. And yeah, you have Tyler Thornburg on the comeback trail and I assume we’ll eventually see Carson Smith at some point towards the middle part of the season, but are we supposed to expect excellence from them the second that they return? That wouldn’t be fair. So, while I’d still rank the third base situation as a bigger issue at this particular moment, don’t be surprised if and when the bullpen creeps up the rankings of concerns with this team.

On the positive side of things, Eduardo Rodriguez looked pretty good again last night. He came out for the seventh, but his night was over after he allowed a leadoff triple to Eddie Rosario. But before that, he continued to look like the new improved pitcher that we’ve been seeing every five days when it’s his turn to take the mound. He probably shouldn’t have came back out for the seventh, but that’s a hindsight’s 20/20 thing. He hadn’t allowed any runs since he stumbled out of the gate by giving up a pair in the first.

Overall, he punched out seven batters and allowed just one walk. Rodriguez allowed four earned runs in five innings in his first start of the year back on April 8, but in his 24.1 innings since then, he’s posted a 2.22 ERA with 32 strikeouts. You don’t have David Price yet, but those are the kind of numbers that you’d expect from a pitcher like Price. After his outing on Friday night, Rodriguez’s 11.35 strikeouts per nine innings ranks sixth in the majors, just ahead of his teammate Drew Pomeranz (11.33), who’s seventh.