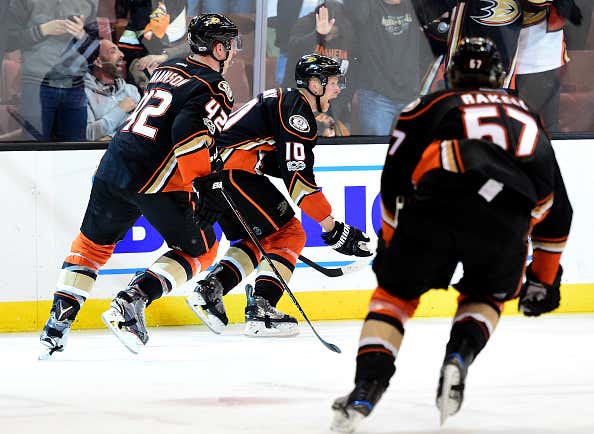 So let’s set the scene real quick. The Edmonton Oilers got off to a 2-0 lead in their 2nd round series against the Anaheim Ducks. The Edmonton Oilers, a team who hadn’t made the playoffs in the last decade, were just 2 wins away from advancing to the Western Conference Finals. Then they dropped game 3. Which was fine, you can’t expect a team like the Ducks to go down 3-0 in the series. Then they dropped game 4 after Ryan Getzlaf had one of the biggest games of his career. The series is tied up 2-2 heading into Friday night. Not a great turn of events for the Oilers but now it’s just a best of 3 series. So now it’s game 5. The Oilers get goals from Draisaitl, McDavid and Caggiula. Their studs are doing stud things. Up 3-0 late in the 3rd period. All they have to do is close out this game and they push Anaheim to an elimination game. And then….

Getzlaf gets the Ducks on the board. 3-1 with 3:16 left to play. And then less than a minute after that…

Cam Fowler cuts the lead to just 1. Not great for the Oilers. You could sense their butts clenching tighter. But any good team should be able to hit the reset button here. Any good team should be able to say, “oh shit, okay now boys, it’s not pretty but let’s just get out of here with a win”. Apparently the Oilers are not that team. Because in the final minute of the game, this happened.

Now I see a lot folks talking about goaltender interference on this goal. And let me say this abundantly clear. The refs got the right call on the ice, ya fucking loons. No chance in hell is this goalie interference. Especially not in the final minute of a playoff game.

That rat bastard Corey Perry puts the Oilers away and has the Ducks just 1-win away from the WCF. Folks, I haven’t seen anybody blow anything as hard as the Oilers blew that lead since the last time I watched one of Asa’s videos.

Do I think Connor McDavid will win a Stanley Cup? Of course I do. At least a couple of them. But is this the year? No shot. Even if they find a way to win these next two games. You can’t be a team that blows that lead at that point of the game and be mentally strong enough to win a Cup.