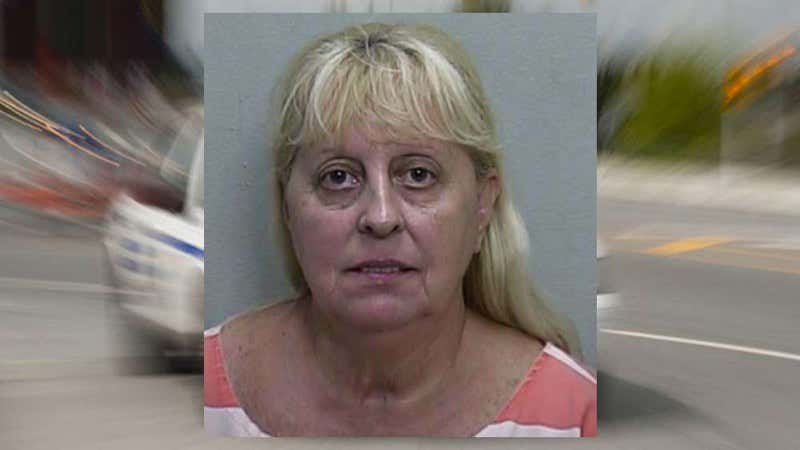 A Florida woman accused of stealing from a yard sale gave her victims a middle-finger salute as they attempted to chase her down.

According to WKMG, Susan Weitzel, 62, of Ocala, went to a yard sale hosted by two sisters and their mother inside The Villages on Saturday. Weitzel asked a woman who was watching a cash box filled with $300 to get a bag because she wanted to buy a china bowl. As the woman left her post, Weitzel opened the cash box and placed the money in her pockets, according to WKMG.

When confronted by a witness, Weitzel took off toward her white Ford F-150 and got in. One of the victims reached the truck before it left, and tried to open the door, but it was locked. Weitzel gave the woman the middle finger before driving off, WKMG reported.

Stealing from a yard sale is about as low as you can go. Just the process of putting together a yard sale is horrific. You feel so poor while you’re putting everything together outside. Covering your nearly useless shit with stickers that say like 75 cents or 50 cents. It’s an old mug. Just fucking take it so I dont have to look at it anymore.

The poors who go to yard sales are trying to talk you down from your stuff that you know is just two mere hours away from a dumpster. The older women are inspecting bras and panties trying to see if there are any stains in the panties and if the underwire in the bra still works. It works, lady. It’ll hold your tits up just fine. Believe me. Your tits will be fine in that bra. Oh for christ sake. Yeah, you can try it on. Looks nice on you. Sure, I’ll take 25 cents even though it’s clearly marked 75 cents.

The amount of shitty trades and bargains that you’ll have to complete in order to rack up 300 bucks at a yard sale is staggering. This lady showed no yard sale honor. She showed no yard sale couth. The audacity to steal someone’s yard sale money is unparalleled. She should have been dragged from her F-150 and been given a whoopin. Instead, she’ll be booked and released only to torment yard sales in the future. The cycle of crime continues.