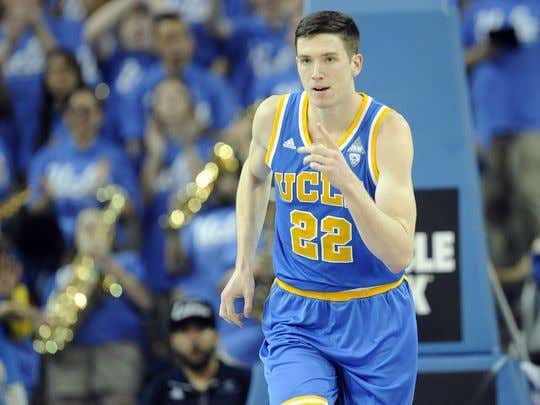 Background: He took a back seat to guys like Lonzo Ball and Isaac Hamilton, but TJ Leaf quietly had a really good year out at UCLA. The 6’10” big was a main reason to UCLA’s success on the offensive side of the ball. Alford could bring him away from the paint, leaving the lanes open for guys like Ball, Hamilton and Holiday to drive and either finish or kick. Leaf put up 16.3 ppg, 8.2 rpg and blocked over a shot a game during his freshman year. On top of that he shot 61% from the field and 47% from three, which made him a wildly efficient player. He ranked in the 98th percentile nationally with 1.19 points per possession for all offensive possessions. Leaf is the son of a former player as his dad Bradley played professional in Israel, which means everyone will compare him to other white basketball players.

Strengths: Like I mentioned, he’s the perfect type of stretch four we are seeing NBA teams start to play. He can protect the rim, he’s not going to dominate the post, but has some moves and can stretch out and shoot from three. On top of that he can beat you off the dribble and is comfortable setting up his own shot off the bounce. We saw him play with an NBA point guard in Lonzo Ball and just reaped all the benefits, especially when running. Leaf was in the 89th percentile nationally as he had 1.337 points per possession in transition. He can get out and run and shows good mobility for his size at 6’10”. On top of that when he is running, you can send him directly to the rim for a lob, he knows how to fill the lanes and is an excellent offensive rebounder. It gives teams options in the transition game. He’s not going to blow you away with his athleticism, but he is an excellent leaper and can finish at the rim with power. He’s a better jumper off of two feet and with a 9′ standing reach, makes it easier for him to finish. Here you’ll see a couple finishes at the rim in transition. First, notice how he gets up and down the floor. His running motion is fluid for a 6’10” guy and he knows exactly where to cut.

On this three in transition, you can see his ability to read the play and get to a spot as he dives right to the corner. After that you can see his shooting stroke. He has nice form as he keeps his elbow in, his feet are squared to the hoop, he jumps straight up and down and doesn’t have any hitch in the shot. Plays like this will be what makes him special at the NBA level as teams are always looking for that big who can extend the floor. To me, him getting out in transition is the best thing a team can do as he will outrun most bigs and if he’s playing with a smart point guard, he’ll cut to be open.

When he’s not in transition, the best place you can get Leaf the ball is in the pick-and-pop situation. As I mentioned earlier, he’s excellent at taking other bigs off the bounce as he scored 1 point per possession (87th percentile nationally) in dribble jumpers per Synergy. Bigs have to respect his ability to shoot the three, meaning they’ll close out on him a little too close and/or fast, allowing him to utilize his ball fakes to go into the dribble. He loves to jab step and ball fake to set up his first bounce and is great at taking just one to two dribbles to get to his spot. When watching him shoot off the bounce, the one thing I notice is his ability to get his feet set, no matter which way he’s going. He’s always under control with his feet and is able to elevate enough to take away the defender. Watch these two plays, where the pick-and-pop is utilized at the top of the key and one the wing. Notice both times he uses a ball fake to set up the dribble.

Finally, while he’s not going to bang around in the post, he’s an excellent rebounder and does have three strong moves in his arsenal offensively. When he catches the ball in the post he has a jump hook, turnaround jumper and will break out a version of the Dream Shake from time to time. His soft touch allows him to go either way over the shoulder and from a little bit of distance as he doesn’t have to catch the ball exactly on the low block.

Weaknesses: You’ll hear everyone bring it up and it’s valid. He needs to get stronger. Right now he uses his athletic ability and size to score/defend, but he can get bullied in the post by stronger guys – something he’ll see a ton of in the NBA. He weighs just 225 and you want to see him add about 15 pounds of muscle to feel like he can be a consistent player in the post. He has to play the four spot at the NBA, which means he needs to get stronger while keeping his athleticism. On top of that he needs to get quicker. Right now he’s a step slow in recovery and helping on the pick-and-roll. He grades out as below average in ISO defensive sets, giving up a point per possession as part of this is due to the lack of strength. In ISO sets players will body him as he tends to give up too much space allowing his guy get to the paint. You also want to see him improve his free throw game. He only shot three free throws per game this year and shot them at 68%, which is a lower number than where he should be at when you look at his shot form. As he gets stronger he should be able to draw more fouls, but with his ability to take guys off the bounce he needs to turn that into and-1s and more fouls.

Draft Stock/Projection: I’m a little higher on TJ Leaf than most, but probably not as high as NBADraft.net. I do think he’s a potential lottery pick as his offensive game is well-rounded and can be that stretch four, which is becoming more and more valuable each season. If he can get stronger and not lose his outside game, he’ll be one of the 10 best players in this draft no problem, the question is can he do both? I do see a little Patrick Patterson in his game as they both left college with the notion of being stretch fours, with decent athletic ability. Yes, I know you’re not allowed to compare white players to black players, but we like to get a little nuts over here. He’ll be better suited to play with a team that likes to get up and down as that will determine his success as much as his ability to develop. He should be a rotational player during his rookie year.