If you had told me that 2 Chainz and his crew had the Area 21 Green Room live up to its name before that segment, I would believe you. He looked like he was zooming somewhere around Saturn before KG beckoned him to shoot that shot and lets not forget who was probably dropping in for a quick visit in said green room.

But after watching that video, I’m pretty sure 2 Chainz lost himself in the lights while wondering why he wasn’t cashing checks in the Association. Dude was killing them inside and outside. Silkiest jumper this side of the Pop-A-Shot Granny. And that finesse move he put on KG? The stuff legends are made of. 2 Chainz heat chart is looking like Steph Curry’s when he was in full video game mode last year. 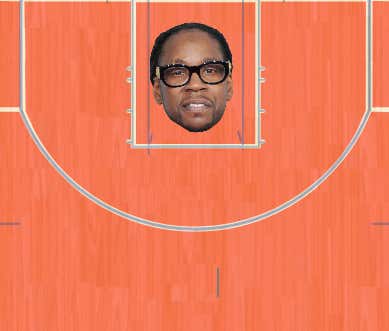 It’s crazy how many athletes want to be rappers and how many rappers want to be athletes. But 2 Chainz apparently could have been both if he wanted to. And it’s pretty safe to say he would have given a better performance at All-Star Weekend than Kobe did with Tyra Banks once upon a time.

P.S. I know he was hurt most of the season, but you cannot convince me that it was a coincidence that the Knicks best regular season in 20 years occurred when Sheed was on the team. The guy simply has “it”.