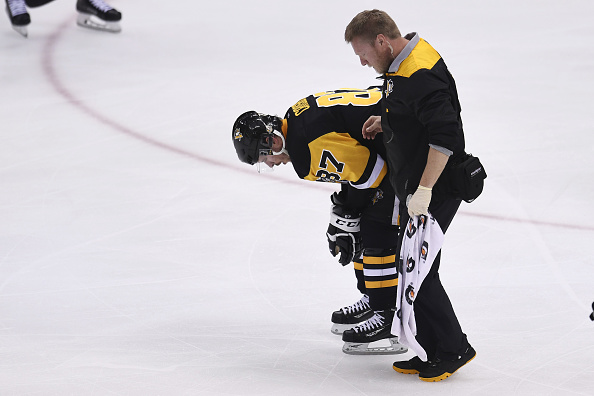 I think I’ve made my stance on Sidney Crosby abundantly clear over the years. I hate him more than Frank The Tank hates NJ Transit. However, I respect the hell out of him because he’s one of the top 2 current players in the world. If you’re somebody who can’t admit that the Stanley Cup Playoffs are better when Sidney Crosby is healthy then you’re just a bozo. But as much as I respect his talent, I loathe his existence.

I’ve also made my stance on the Washington Capitals abundantly clear. I fucking despise each and every single player on that roster, I hate their coaches, their GM, their fans, their wives aside from Lauren Oshie and I especially hate the fact that none of them can admit they didn’t give a shit about the Caps before Ovi was gifted to them.

So as long as you weren’t in a coma up until this morning, you’ve seen the Matt Niskanen hit on Crosby from last night. And if you were anywhere near Twitter at all last night, you will have seen every single possible take ever regarding the hit ranging from Crosby got hurt on purpose to the idea that Alex Ovechkin shouldn’t be allowed to play another game these playoffs. Seriously. That take is right here. And as somebody who hates both the Capitals and Sidney Crosby equally, I feel that I can approach this incident from the most unbiased stance out of everybody else in the world. So I’m here to give you the 100% correct take and nothing else.

Now slowed down from this angle, it doesn’t look good. It doesn’t look good at all. Niskanen sees Crosby’s numbers, he sees him falling to the ice, and he still brings both of his hands up and follows through. It’s one thing to bring one hand up to brace yourself for incidental contact in that position. It’s another thing to keep both hands on the stick and follow through with a shaft to the side of the dome. Even if you’re doing everything you possibly can defend Niskanen (or Nisonen) on this play, you can’t say that this is, at the very LEAST, an extremely reckless position to find yourself in. 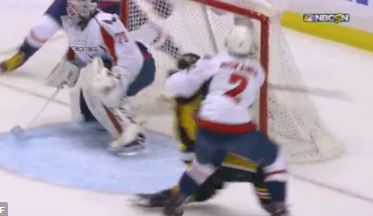 But obviously the slow-mo replay doesn’t tell the full story. It’s easy to say this was a dirty play from Niskanen when you see it slowed down to 1,000 frames per second. When you see it in real time… well it becomes less obvious.

Hockey is an incredibly fast game and sometimes shit just happens. This certainly looks much more reactionary than anything premeditated. More of a bang-bang play than anything else. Crosby takes the hack from Ovechkin, drops to a knee right has Niskanen is coming over to make a play on the puck and it’s just an unfortunate turn of events. But I feel like a lot of people are hiding behind the “it all happened so fast he couldn’t do anything about it” defense. These aren’t beer leaguers out there who are on the ice once every other week. These are professional hockey players who have been in every single possible situation before in their career. It’s not like Niskanen had no idea this was a possible situation that was going to be coming. Do I think that Matt Niskanen said to himself, “nice. Here comes Crosby. I’m going to fuck his life up”? No. But it all goes back to the point I just made above about the recklessness of this play . Because even if Crosby didn’t drop to a knee which led Niskanen to catch him in the dome, he was still going to get a penalty out of this situation regardless. Because at the very best, Niskanen was going to hit Crosby in the numbers and into the net. At the very best, he was going off for 2 minutes. At the very worst, he received a 5 + a game and injured Crosby.

And that’s where another argument comes into play. I feel like a lot of people are rational enough to understand there are going to be disagreements on whether or not Niskanen meant to target the head there or not. But plenty of people are out there saying the only reason Niskanen got 5 and a game was because it was 87 who got injured. And you know what? They’re 100% right. But that doesn’t make it any better. Because–in case you haven’t caught on to the theme yet–my argument constantly goes back to recklessness. Every single time Crosby is out on the ice, you have to know that there’s going to be a microscope on him. You have to know that the officiating crew is going to pay extra close attention to every single time there’s contact with Crosby. It’s the reverse Cam Newton. And Niskanen knows that. Ovechkin knows that. Every single person in the league knows that. Which is why you have to play the game differently when he’s on the ice. Does it suck? Yes. But that’s just the fucking way she goes. These are professional hockey players and they should understand the situations they are putting themselves in. It’s not like Niskanen thought he was coming in to lay the body on Ian Cole. He knew it was Crosby and even though it looks like he didn’t go in there intentionally trying to injure him, he caught him in the head and you have to know that’s going to send you off the ice for the rest of the night. Especially when the stripes have to make that call in real time and don’t have the ability to mull it over in a 900+ word blog post.

P.S. – Lot of people worried about the way Crosby’s left knee buckled during that hit. Didn’t look pretty but there was this.

Still no actual update on him but if Crosby is out for the series AND Letang is already out AND the Caps still can’t find a way to advance to the ECF… well then that’s just hilarious.