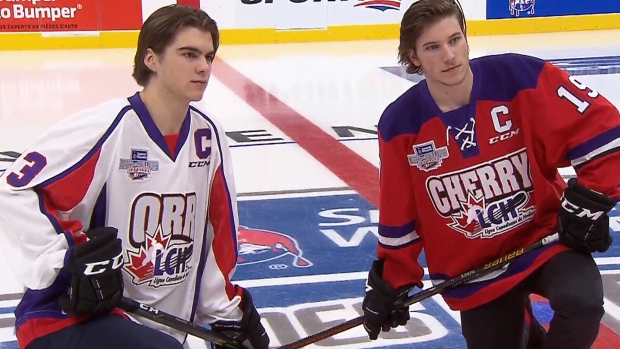 In case you got too blackout on Saturday night and forgot, the Philadelphia Flyers caught the break of a century in the NHL Draft Lottery and ended up with the #2 pick in the draft this June despite only having a 2.4% chance of getting that pick. They become the first team in NHL history to win 10-games in a row and also get a lottery pick in the same year. You can take that fun fact however you want. But yeah, somehow someway, the ping pong balls were in the Flyers’ favor on Saturday and instead of picking somewhere between 10-13 like it was shaping up, they will be able to choose between Nolan Patrick and Nico Hischier.

Now for a lot of people out there, these are two names that they’re hearing for the first time. This draft isn’t like the last few. There’s no Connor McDavid in this draft. There’s no Jack Eichel. There’s no Auston Matthews. There’s no Patrik Laine. You’re not going to get somebody in this draft who is going to revolutionize your roster immediately. There are a few nice players in the draft class, sure. But as far as generational talents go, nobody is looking for the next great one in this class. But Patrick and Hischier are eventually going to play huge roles for the Devils and Flyers at some point down the line so let’s get familiar with the two.

Nolan Patrick is your prototypical big, two-way center. He’s listed at 6’3″, ~200 lbs and he just wrapped up his 3rd season playing in the WHL which is the most physical out of the Canadian major junior leagues. Last year he had 102 points in 72 games, was the WHL Playoff MVP and led the Brandon Wheat Kings to win the WHL Championship. 41 goals and 61 assists that year and he was still another season away from his draft year. 30 points in 21 games during the playoffs. The kid can produce when the pressure is on high. But this year has been a little more difficult for him. The biggest knock on Nolan Patrick right off the bat is his injury history.

That’s 2 separate injuries in just this year alone. The groin injury forced him to miss playing for Team Canada at the World Juniors and the knee injury had him sit out the WHL playoffs where the Wheat Kings got bounced in the 1st round. In the games that Nolan Patrick has played this year, he still had 46 points in 33 games. You have to imagine he was playing through some pain during at least a few of those 33 games and he’s still producing numbers in the WHL. Like I said, he will eventually play a huge role on the Devils or Flyers. But that injury history has to worry you at least a little bit considering it’s not going to get any easier for the kid to stay healthy out there. If he drops the #2 and the Flyers are able to grab him, I don’t see him on the roster next year. I’d rather him go back to the WHL for another year and put on some more mass for 2018-19.

Nico Hischier. 18-year-old out of Switzerland currently playing for the Halifax Mooseheads in the QMJHL. 86 points in 57 games. Nobody has had a bigger year than Nico Hischier. Coming into the season, he was still relatively unknown. People had him listed as a probably top-10 pick in the draft but everybody had Nolan Patrick at #1 and nobody even challenging him. Then Hischier started dominated the Q. Then Hischier went out to the World Juniors (which Nolan Patrick missed) and made Switzerland a team that wasn’t even just competitive, but almost took down USA in the quarters. Then there was the CHL Top Prospects Game which gave us our first look of Hischier and Nolan Patrick going head-to-head. Here’s a blog from after that game in January on why I thought Hischier actually jumped Patrick in the rankings.

From what I’ve seen out of the two, Hischier is more of a pure goal-scorer than Patrick. Now keep in mind that I’m just some asshole blogger who usually sticks to dick jokes. But from my very expert opinion, Patrick is more of a complete player and Hischier is more of an offensive threat. The kid is always making plays when the puck is on his stick. Whether he’s scoring himself or drawing so much attention that he opens up all the ice in the world for his teammates, he makes shit happen offensively. The biggest knock on him heading into the draft, however, will be his size. He’s listed at 6’0″, 180 lbs. We’ve seen plenty of undersized players thrive in the NHL and they’re currently doing it. Gaudreau, Drouin, Kane. But they’re playing on the wing. They’re not up the middle. But the thing with Hischier is since he’s playing for Halifax on loan from SC Bern in Switzerland, he is technically AHL eligible for next season. Something that Nolan Patrick is not. So if you draft Nico Hischier, you can start him with Lehigh Valley and see where things go from there next year which is obviously a much better situation than sending him back to junior.

And then, of course, there’s always the chance that somebody comes around and offers a trade with Ron Hextall for that #2 pick. Obviously a team like Colorado will be in the mix. They had the worst season out of any team that I can remember and yet they got blasted in the ass with the 4th overall pick in a draft that really only has 2 or 3 impact players. If they make somebody like Matt Duchene available, Hexy should pull the trigger. If it’s Landeskog then tell them to go fuck themselves. But I’m sure Hextall’s phone is going to be ringing constantly between now and June 23. The Flyers need goal scorers and they need them now. Hischier and Patrick would both be nice fits on this team but neither of them are going to be a difference maker next year. So if the perfect offer comes along and helps this team win right away, you have to take it.