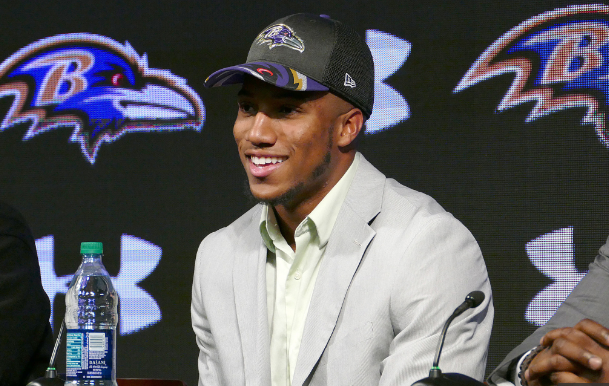 Another year in the books, and another solid draft for Ozzie Newsome and the Baltimore Ravens. Although grades from the pundits aren’t quite as high as they usually seem to be, I think that’s more of a reflection of the fact that the Ravens had less picks than recent years. That’s a product of going out and signing guys like Eric Weddle, which is a trade-off I’d take 11 times out of 10. There were some needs that went unaddressed (wide receiver) and that shouldn’t be ignored, but my belief is that pass-rusher is a much more critical position of need for the Ravens. They certainly took care of that. They also took some guys who should serve as depth and compete for starting jobs on the O-line. They’ve certainly hit on guys in the 4th and 5th rounds at those positions in the past, and there’s no reason to think that they may have again. So that’s 2 out of 3 perceived “needs” that the Ravens drafted. Can’t hate that. Let’s meet the 2017 Ravens Draft Class. 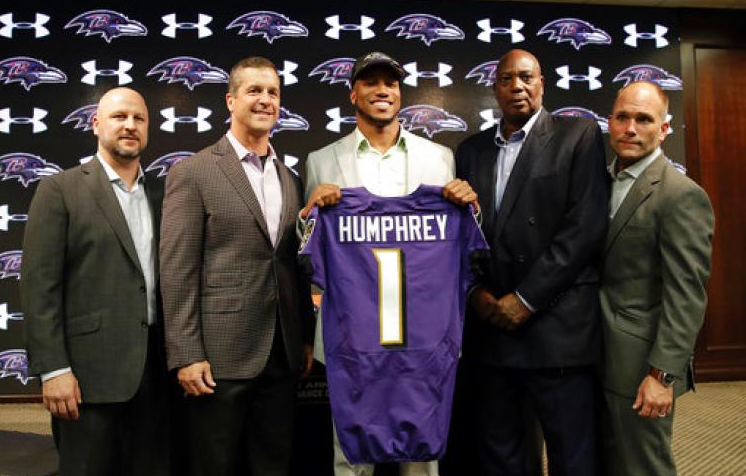 I touched on the impact of drafting Humphrey has on Friday morning. We all know Jimmy Smith is a very good corner, but we can’t depend on him to be healthy. Signing Brandon Carr helps that situation a bit, but he’s 31 and isn’t a long-term solution. Marlon Humphrey is. He’s talented, physical, and has an NFL pedigree. His father was a 1st round pick himself. Whereas we’re a couple years behind the ball on planning for life after Terrell Suggs, we’re ahead of the curve at corner with this. With the NFL only becoming more and more pass-happy, that’s important. Maybe cornerback wasn’t on everyone’s radar going into the draft, but it probably should have. It just makes more and more sense the more I think about it. Marlon Humphrey should have us set at a critical defensive position for the next decade.

Tyus Bowser is a phenomenal athlete, and hopefully the long-term answer at pass-rusher. That athleticism is evident given that he played some basketball at Houston as well, and it’s hard to ignore on the tape.  He’s much more of a speed rusher as opposed to a power rusher, which should complement Sizzle well for the next couple years. He’s got that protypical “bend” you like to see from an edge pass-rusher, and had top 5 measurables at his position among virtually all combine drills. He missed 5 games this past year with an orbital fracture from a fight with a teammate, which isn’t a great look. But by all accounts, this was an isolated incident and he’s shown nothing but strong character and high football IQ otherwise. He had 7.5 sacks in the 8 games he played, so he’s certainly productive.

This was the pick the Ravens scooped from the Timmy Jernigan trade, and they essentially used it to replace him, although his skillset is closer to the departed Lawrence Guy’s. He’s not quite as impressive a prospect as Bowser and Williams, but he’s a high-floor guy who can play DE in the Ravens’ base 3-4 system. He’s not the quickest or best athlete, but he’s strong and his technique is flawless. You can count on him staying gap disciplined and getting good push off the line. When he beats his man, it’s usually with a classic swim move. He’s shown a consistent history of getting his paws into those short passing lanes and batting passes down. He even blocked a kick at Michigan. This guy won’t be a superstar, but he’ll be a dependable guy on the defensive line for years to come.

Tim Williams is an absolute steal at #78 in the draft. Across the board, there’s no question that he’s a 1st round talent. For months and months, the gurus over at ESPN had him in the top 10 on their “Big Boards”. So why was he still on the board? He failed to

Well, that and a misdemeanor gun charge back in September. But how serious can that be if Nick Saban only suspended him for half a game?!? Kidding. But yes, there’s good chance that this pick turns out to be very regrettable. His weed issues have been compared to Randy Gregory after all. But I think chances are higher that we look back at this being a complete and total steal. That’s how talented he is. He’s got strong upper-body strength and has multiple effective moves to beat his man and get to the QB. There have been some knocks on his football IQ, but I don’t think he’ll be asked to do too much too early in Baltimore. His job will be simple, and may just come on 3rd down. That job is simple. Get to the QB. 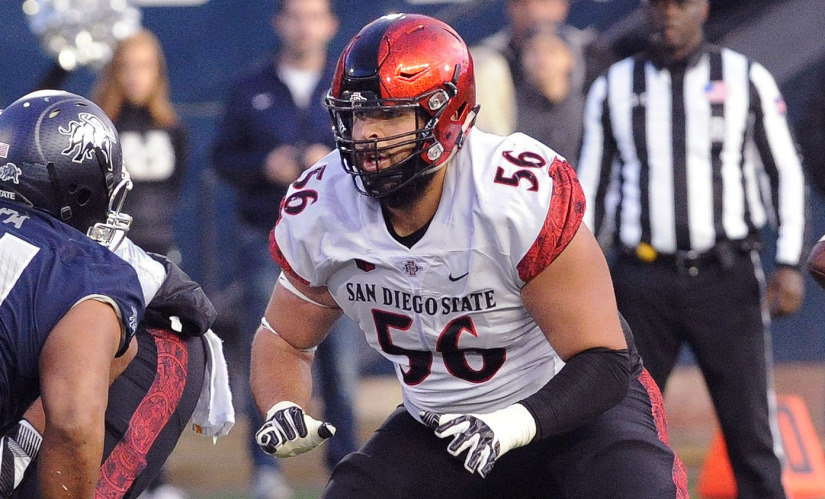 First things first. No, he’s not related to Tony. But he’s got plenty of beef. 6’4, 320 lbs is pretty much ideal for interior line in the NFL. He’s equally effective in pass protection and run-blocking, although he doesn’t particularly excel in one or the other. He only played two years of football in high school, but showed an ability to learn quickly and improve throughout college. One would only expect that to continue in the NFL. He may be able to step in at left guard from day 1, which would allow Alex Lewis to jump out to right tackle, where he had a lot of success in his rookie year. 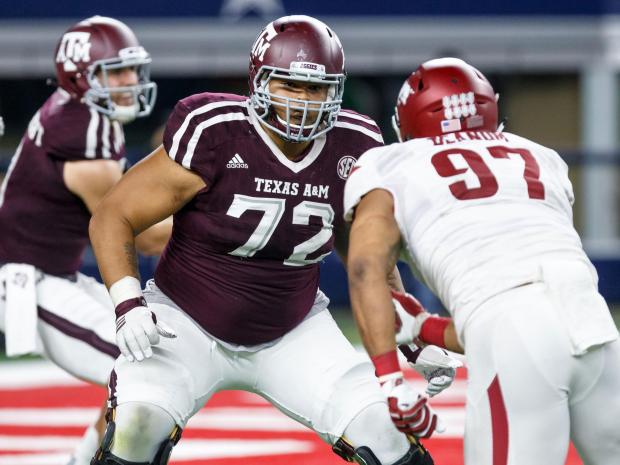 Here’s an interesting project. Eluemanor was born in London and moved to the U.S. before his junior year of high school. He was at a small college in PA until transferring to A&M last year, so he’s only got one year against top competition. But he handled that competition (the SEC, nbd) fairly well and showed improvement quickly. He’s more of a mauler than a pass protector, so he may eventually end up at guard, which is actually what he played before joining A&M. Every photo I found of him, he looks absolutely massive, yet he’s only about 6’4″. He’s shown incredibly good instincts for somebody with so little experience playing football. There are places where he can improve his technique, but he’s rarely caught off balance. I wouldn’t expect to see an impact from him right away, but he could be a starter down the road. 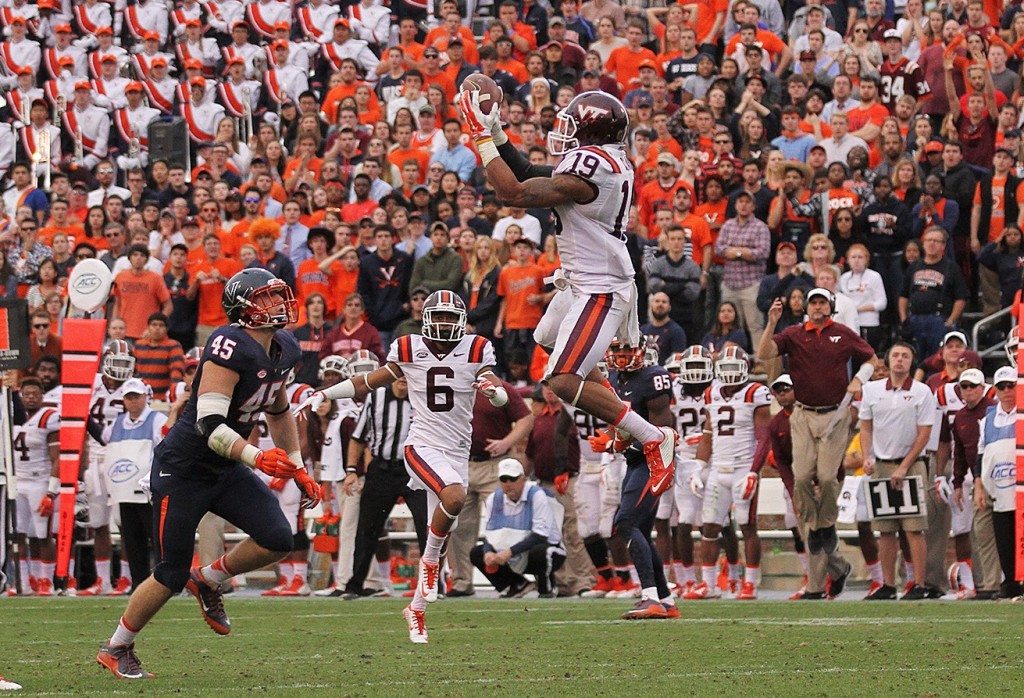 Chuck Clark is a sound football player, but he’s not necessarily a high-ceiling guy. He brings great intangibles and discipline to the table though. He was a 3-year starter at Va Tech and earned captain status his last year. He’s versatile enough to play either safety position, and is effective in stopping the run. By no means do I expect much from Clark, but we’re pretty set at starting spots in the secondary given all the recent moves we’ve made. To borrow a baseball term, he’s “good organizational depth”. If he makes the roster and contributes in any way in 2017, I’d expect it to be in special teams coverage.

So that’s the 2017 draft class. There’s obviously still a cloud hanging over the wide receiver position, but Ozzie insists the offseason is far from over. I still have my fingers crossed on Anquan Boldin, but that’s still not a long-term solution. Mike Wallace and Breshad Perriman can only do so much. Maybe next year Joe will finally get his man. The center position remains a question mark as well, which depends quite a bit on how the offensive line is shuffled. There’s a lot of bodies there that can play a lot of different positions. We’ll see how it plays out. As always, In Ozzie We Trust.