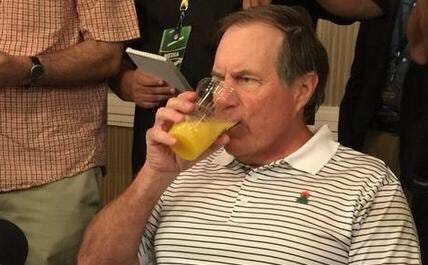 When you’re a man of my breeding, integrity and regal bearing, it’s important to be able to admit when you’re wrong. What I won’t do is admit when I’m wrong before I’m wrong.

Yes, I’m a founding member of Team Trade Jimmy Garoppolo and was convinced the Patriots would have dealt him by now. I have it on good authority by a source that has never steered me wrong that the Pats have actively shopping him, in spite of what you hear from Adam Schefter. So while technically I might be off by a matter of degrees, I am not ruling out a deal still getting done. To put it in “Patriots trade Tom Brady’s backup” terms, instead of thinking a Matt Cassel scenario, think 2002 Drew Bledsoe, who went to Buffalo after Day 1 of the draft for the Bills’ first rounder the following year (Ty Warren).

It just makes no sense not to trade Jimmy G given what teams are paying in terms of draft capital to take inexperienced, flawed and limited quarterbacks:

Shipping companies pay less to get Somali pirates to release their cargo ships than teams are spending to get quarterbacks who have never called an audible, never made a sight read, who’ve always checked with their sideline pre-snap to be told who to throw the ball to. And who are guaranteed to start the year on the bench, if not spend their whole rookie season there. It’s madness to think they’d give up that much and leave a semi-known NFL commodity standing on the Patriots sideline holding a tablet.

And for the guys who think the Pats need to keep Jimmy because Brady might get hurt, I hear you. I acknowledge your concerns. But you have to answer me one simple question: What does Garoppolo get paid in 2018. The franchise tag will be $25 million. The Patriots are not paying him that to be the spare tire. If he can hit the open market in a world where Mike Glennon got $15 million a year, he will. Just because he’s amazingly handsome doesn’t mean he’s dumb. Also, you need to ask yourself why is it that should Brady have to miss some time, Garoppolo can save the season but Jacoby Brissett with a full year in the system can’t?

I can’t move off the idea that Cleveland is still in play for Garoppolo. The trade with Houston that moved their No. 12 pick means they’re loaded for next year, with two firsts and three second rounders. Right in that sweet spot Belichick likes his picks in. The Browns had a nice haul yesterday. They can easily sell their wretched refuse fanbase a draft of Myles Garrett, Jabril Peppers and David Njoku. But good luck convincing them they’re going to win more than three games with Brock Osweiler and Cody Kessler. But hand them a plug & play, legitimate NFL starter for a handful of next year’s picks, and they’ll be pre-ordering playoff tickets.

So yes, I admit a deal did not get done. But I refuse to admit it won’t.