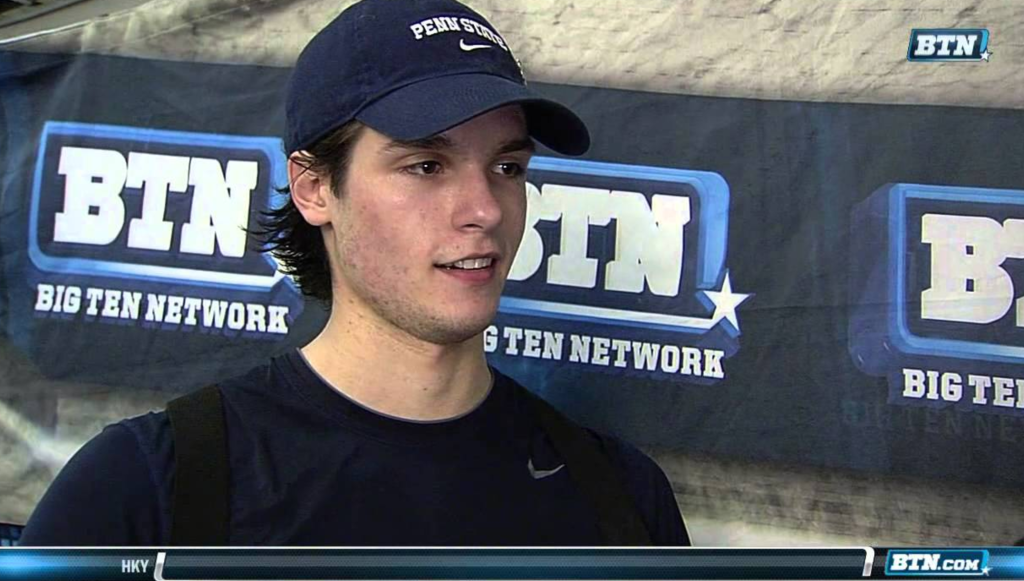 Centre Daily – A man charged with urinating on people at Primanti Bros. has been named by the police.

According to State College police, Matthew Skoff, 25, of McKees Rocks, was cited for his actions. Court documents show Skoff faces a summary citation for public urination.

Skoff was accused of entering the restroom at the downtown State College restaurant Friday night and urinating on a person who was waiting in line for a urinal, the CDT reported Saturday. The man then entered an occupied stall and urinated on another person.

Skoff is a former Penn State man’s hockey player and had a 32-32-7 record as a goalie.

Power move city.  Ladies you may not know this with your fancy little personal stalls with scented candles and issues of Vogue  but the men’s bathroom is a war zone.  We’re lazy so we always wait until the last possible moment to piss, so when we do go in, it’s borderline emergency time – seeing some jackass occupying the urinal taking his sweet ass time is infuriating.  Only thing worse is when a dude is in the stall taking a shit – save it for home man, stop being selfish.  So yeah the civilized thing to do is wait your turn patiently in line, but sometimes you’re just not in the mood to be civilized.  Sometimes you’re worried about a bladder infection.  Sometimes you’re a little drunk and need to assert your manhood.  Sometimes you just whip it out and start pissing all over everyone in your way.  Piss on the urinal guy, piss on the stall guy, piss on the fucking guy at the register if you have to.  Who’s to judge.

Sorry to get so graphic here with the TMI just felt like I needed to explain the scenario fully, in fairness to Matthew Skoff.