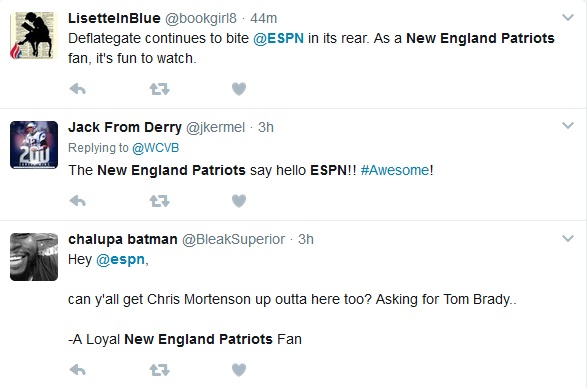 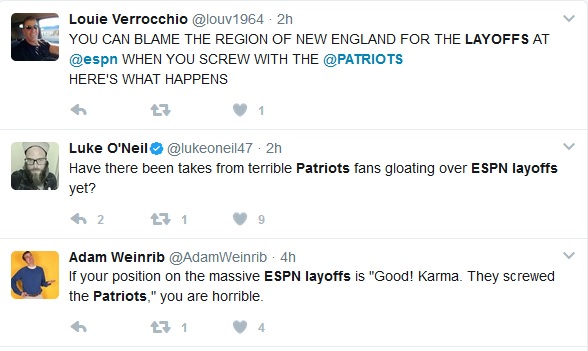 I have to admit, these massive layoffs at ESPN have put me in the throes of a moral and existential crisis. As a human being I hate to see people lose their jobs. As a Patriots fan (I admit I just differentiated human beings from Patriots fans; moving right along) I have a list of grievances against the World Wide Leader that is long and distinguished. So I’ve been struggling all day with how to feel about it.

Maybe it’s because I believe in karma. Or I can’t stop hearing my mother’s voice in my head, with her infinite capacity to feel bad for others. It’s probably because I got laid off once. When the Irish Rose was pregnant with our first kid and right after we’d bought a house. It took seven weeks to find a job and I swore I wouldn’t wish having nothing to get up for in the morning on my worst enemy. And ESPN qualifies.

Or, maybe I’m just being a pussy. Because there are plenty of people working in Bristol the last few years who have earned the wrath of me and anyone else who’s emotionally invested in this team. Here’s just a handful of the things they’re guilty of when it comes to this team. And this is right from the heart, without going to the Googles:

*Chris Mortensen’s Tweet about 11 of 12 balls 2 pounds under was Deflategate’s Big Bang. Once it was proven to be a lie, the post stayed up for months before he tweaked it. And the last I looked, his report was still in it’s original Fake News form on their website.

*Mark Brunell, who defrauded investors out of $7 million while living in a waterfront mansion in Florida, cried real tears over Deflategate.

*Jerry Rice called Tom Brady a cheater. About a week after doing a segment where he talked about how he used to cover his hands in Stickum, long after it was banned.

*Kelly Naqi went on OTL to report breaking news that the Patriots were caught messing with the kicking balls in the AFCCG against Indy. When Adam Schefter came on a minute later to tell her that it was actually an NFL employee  and that the guy actually stole the ball so he could sell it and pocket the money, ESPN said nothing. And Kelly Naqi has literally not been seen since. 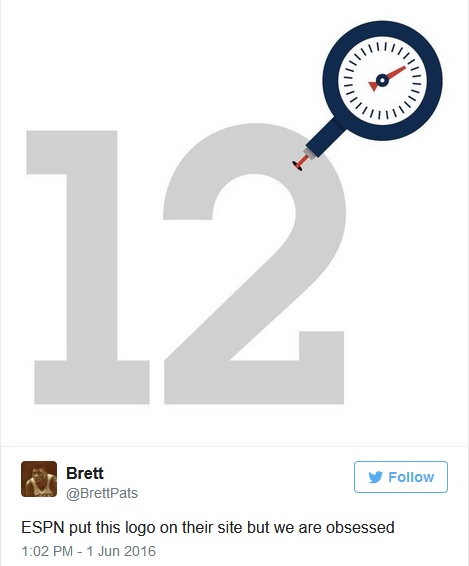 *In a prime time SportsCenter, they listed all the Patriots “cheating scandals” including the Rams’ walk through tape, which never happened. According to the Boston reporter who actually first reported the story, it was a lie. Later in the same show, Hannah Storm reiterated the Pats taped the Rams walk through. ESPN later issued a correction. At 1 AM.

*A SportsCenter ad with the line “Softer than the footballs in Foxboro.”

*Within about 48 hours of Brady winning his appeal and vacating his suspension in 2015, Seth Wickersham and Don Van Natta posted a 10,000 word diatribe about all the Patriots’ spying, including bugging locker rooms (never happened), jamming opponents’ helmet radios (the league runs those), saying the billboard outside Gillette is angled so the Patriots sidelines can see replays (no it isn’t) and the Seahawks were worried the Pats had people in the hills above their practice field in Arizona spying on them (probably true, though fucking ridiculous). 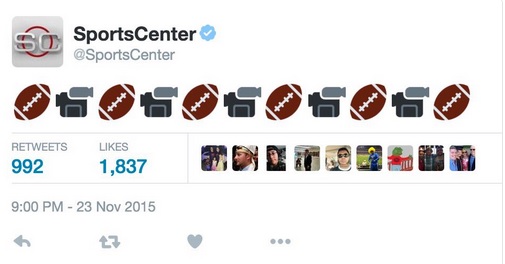 I could go on, but you get the point. ESPN’s contempt for the Patriots and the people of New England has been total and they’ve made no attempt to disguise it. They’ve been Roger Goodell’s state run media. While that devious little bag of assholes has been conducting a witch hunt against his signature franchise, ESPN has built the stake and chopped the firewood. So as worried as I am about bad karma, they’re the ones who are on the business end of it.

Obviously there are some great ones working for that company. Mike Reiss is as good a beat reporter as there is in the business. I’d consider Tedy Bruschi a great analyst no matter which team he played for. John Brenkus of Sports Science broke down Deflategate within a couple of days of the story breaking an proved what bullshit it is. There are others. And if I’m pulling for anyone to get through this unscathed it’s the ones who didn’t take the cheese and tow the company line just because their bosses resent Bill Belichick.

As for the rest of them? I’m sorry they lost their jobs. Sincerely. It’s a horrible feeling. But at some point it’s like that old Kevin Smith thing about feeling sorry for the independent contractors working on the Death Star. Eventually bad things happen when you work for an evil empire.