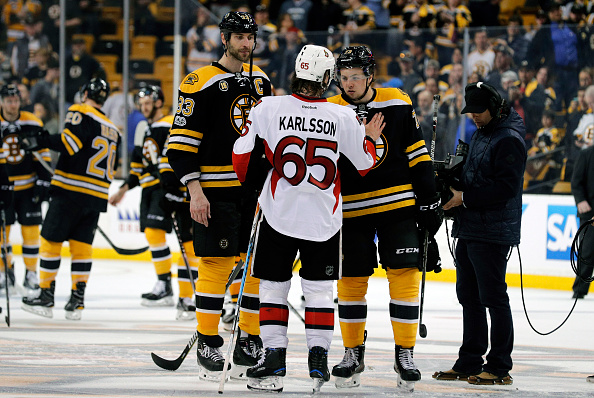 And just like that, the 1st round of the 2017 Stanley Cup Playoffs have come to an end. No Game 7’s yet this year which was a bit of a cock tease given how many of these games went to overtime and/or decided by 1-goal. But that’s the only thing these playoffs have been lacking so far. Everything else has been as advertised. The greatest playoffs in all of sports. You just don’t see this level of parity in other sports. Guess who’s gonna play in the NBA Championship this year? Probably the Warriors and the Cavs. Guess who’s gonna play in at least one of the next two Super Bowls? The Patriots. But that’s not the case with hockey. Greatest sport in the world. All you have to do is make the playoffs and anything is possible from there. And with the best playoffs in sports comes the best tradition in sports. The Hockey Handshake. Not sure if anybody has clued you in on this little fun fact yet or not but the Hockey Handshake isn’t just the best tradition in sports, it’s the best tradition in the world. It demonstrates class, it demonstrates respect, it demonstrates honor, and it demonstrates the complete disregard for the exchange of germs and bacteria via contact. You think these guys wash their hands before they shake them? Get the fuck outta here. That pussy shit is for basketball.

Now let’s get to all the 1st round handshakes because it’s Monday and you deserve to start your week off the classiest way possible.

The Blackhawks may not have shown any signs of life during the series, but at least they showed class while shaking the Predators’ hands

At this point, Bruce Boudreau has to be the classiest coach in the league. Guy is always on the losing end of the handshake line. So much respect.

The Flames are so classy they wanted to get to the handshake line as fast as humanly possible. So they allowed the Ducks to sweep the series. Doesn’t get more honorable than that.

Such an incredible moment here for the Edmonton Oilers. They haven’t been able to shake anybody’s hand in more than a decade. But shaking hands is like riding a bike. You never forget how to do it and here they are, shaking away like there’s no tomorrow.

If you look up the word “respect” in the dictionary, the definition is just a picture of Erik Karlsson and his beautiful mane.

The Maple Leafs are a bunch of Millennials so I was afraid they’d try to switch it up a bit and throw some daps into the mix. But they treat their elders with respect and they’ll have plenty more handshakes coming their way in the future.

And there you have it. 8 series down and now it’s on to the 2nd round. Only 7 more handshake lines left in the season. Let’s make the best of them!!!!!