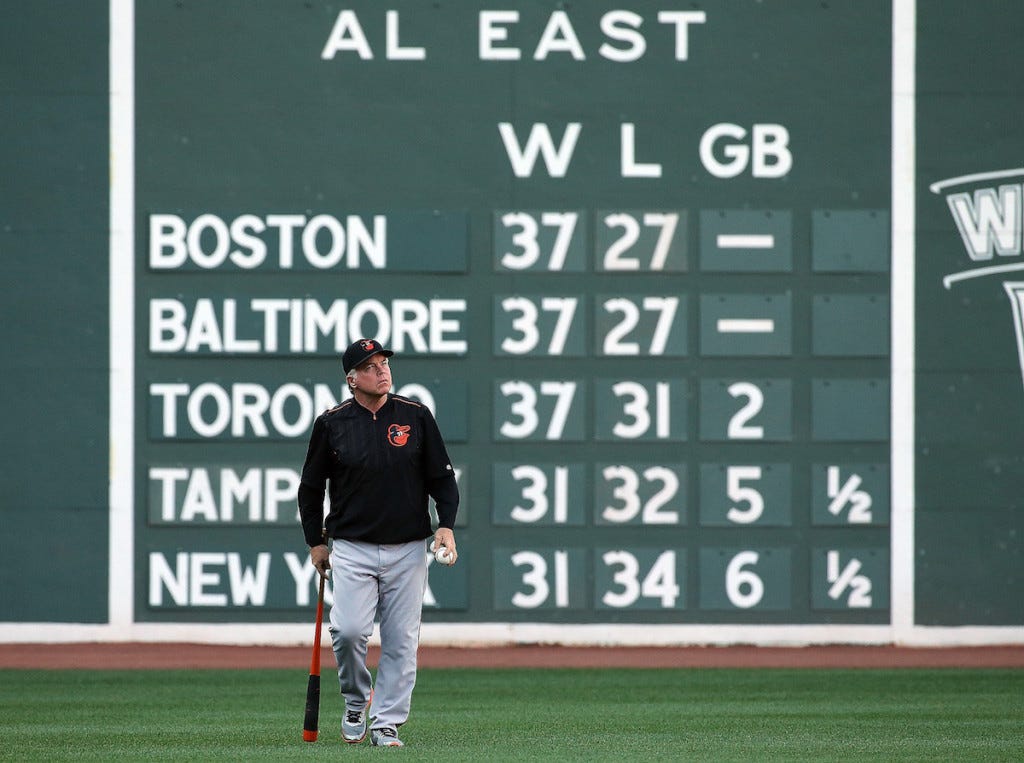 This quote came after the Orioles arrived in Boston, but before their 8-1 loss to the Red Sox at Fenway Park last night. I respect the hell out of Buck Showalter as a manager and think he’s one of the best in the league, but it’s pretty obvious that the Red Sox own a significant amount of real estate in that man’s brain. He can’t help himself. Any time he’s given the opportunity to take a shot at the Red Sox, he takes it.

“I don’t know where we are with the flu today,” Showalter said. “I haven’t gotten updated by [head athletic trainer Richie Bancells]. Everybody in the league has had that issue. I’ve had it and it’s a different strain, I’ll tell you. It lingers for a long time. Some of them seem to be a little more noteworthy, it seems like, but our guys have fought their way through it. I know we’ve got a lot of guys that aren’t 100 percent with it, but so do a lot of clubs. So nobody really wants to hear somebody else complain about it. Our guys have done a good job not broadcasting it to the world.”

Or has the Orioles’ experience with the flu been nowhere close to being as bad as what the Red Sox have dealt with? Because, I’m looking at it right now, and the Orioles have played six games this year, and as I go down their lineup, I see games played — Welington Castillo (5), Chris Davis (6), Jonathan Schoop (6), JJ Hardy (6), Manny Machado (6), Adam Jones (6), and Mark Trumbo (6).

It’s just, hm. Makes you wonder. And for the record, the Red Sox aren’t standing on top of a mountain, “broadcasting to the world” that they have the flu and begging everyone to feel bad for them. Fans and media are going to notice when you basically have the entire lineup missing games one week into the season, and the media is going to ask why. The answer: the flu. And when it tears through a clubhouse in the unprecedented fashion that the Red Sox just experienced, then yeah. That’s going to be a story, Buck.

But Showalter’s Red Sox shade-throwing doesn’t come as much of a surprise. Throwing it back to 2011 when the Red Sox signed Carl Crawford to a seven-year deal worth $142 million and traded for Adrian Gonzalez before giving him a seven-year, $164 million extension, Showalter was very critical of Theo Epstein in the fallout of the moves.

“I’d like to see how smart Theo Epstein is with the Tampa Bay payroll,” Showalter told the magazine. “You got Carl Crawford cause you paid more than anyone else, and that’s what makes you smarter? That’s why I like whipping their butt. It’s great, knowing those guys with the $205 million payroll are saying, ‘How the hell are they beating us?’”

Six years later, Epstein ends the 108-year World Series drought in Chicago with the Cubs by drafting and developing superstar talent, while supplementing that with free agent and international free agent signings to add a third ring to his resume, which really should be three and a half rings because his fingerprints were all over that 2013 Red Sox team. Oh, and Fortune Magazine also named him the World’s Greatest Leader last month. So, yeah. That’s how smart he is.