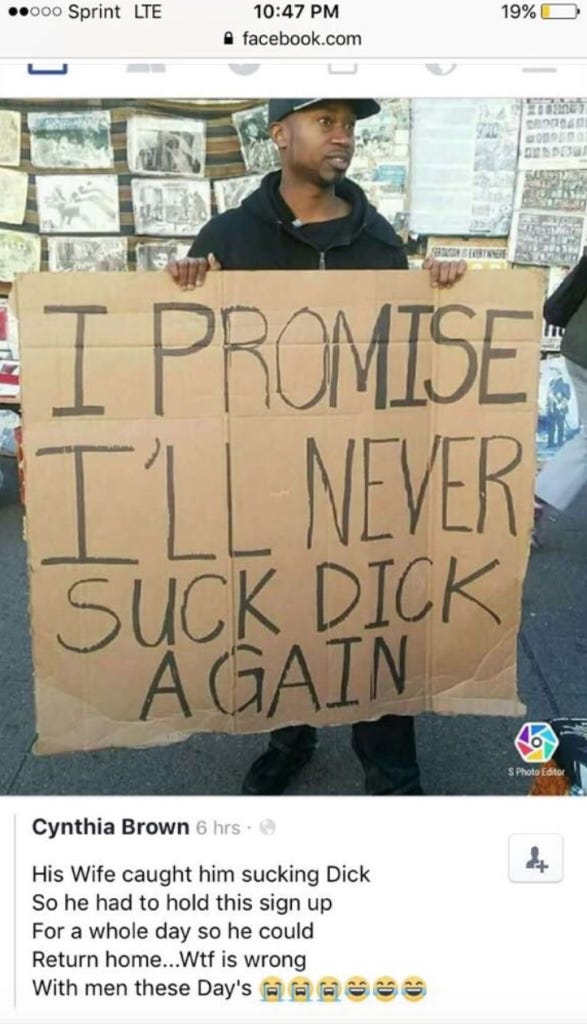 Marriages aren’t easy, I’ve never been in one and I already know that. The man you used to be is washed away the moment you make those vows and you become a new, supposedly more responsible and mature, man with that fateful, “I do.” No more late nights with the boys, no more beers for breakfast, a 401k, no more sucking random dudes dicks, all that stuff is in the past. That’s the promise you make to your new bride.

I’ve heard of the power of love, I’ve heard it discussed in books and tv shows and movies, but I’m not quite sure how you overcome this one. Fleeting moments can completely change how you’re viewed in the eyes of some people and I feel like your wife catching you with a dick in your mouth is one of those things you can’t come back from no matter how much begging you do. Some people can look past cheating but I feel like that image of you servicing another man is one that gets burned in the cornea, like an image left up on a plasma TV for too long.

But you know what? I do respect the lack of bother this guy seems to have. It’s like he’s finally free of his straight shackles and he’s standing on the corner holding that “I’ve sucked a dick before” sign as a proud, gay man. As a resident of New York City, I’ve seen my fair share of homeless people and they are all drenched in the same shame. It’s heartbreaking to see as they sit there with their head down, scared to make eye contact lest they feel you judge them, as they plead for salvation. But this cocksucker? He’s got his chin up, his chest out, and he’s feeling himself for the first time in his life. Probably throwing winks at cute guys as they walk by and shit.

This wife may think she cracked the code to ending homosexuality, one better than praying it away, but I think she’s going to be disappointed when she checks in on her lunch break to make sure he’s still manning his corner and finds him in an alley with some dude. Thought she conjured up the perfect punishment, ended up forcing the world’s greatest pickup line on him. Talk about an all-time backfire.