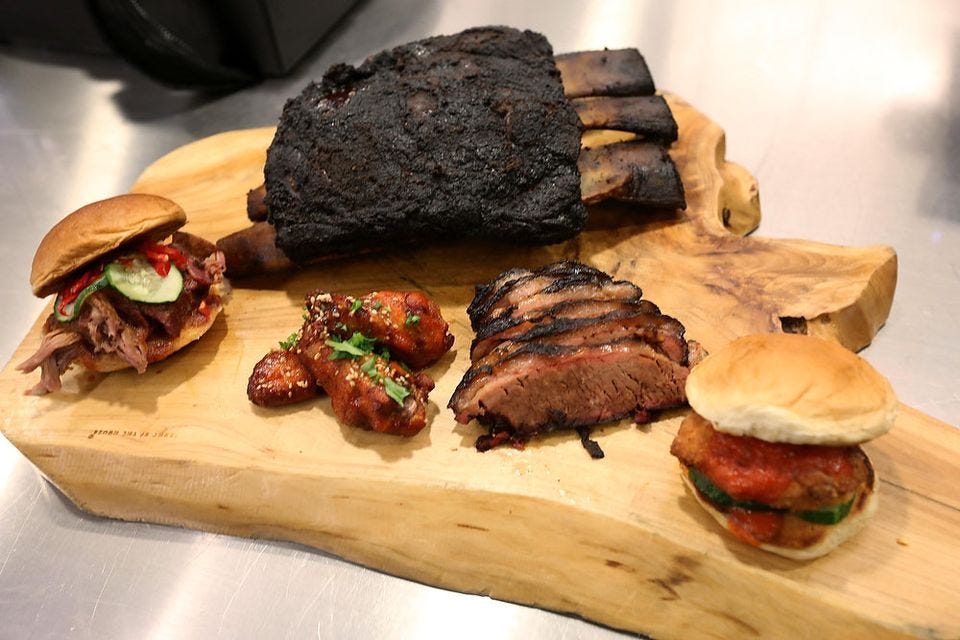 The Yankees finally come home on Monday so they finally put out information about changes to the stadium for this season. There are new party decks in centerfield and a playground for kids, but the most important thing we learned today is the new food items at the stadium. Last season I ranked all the new items and then I went out and ate them.

This year, I’m going to do the same so let’s take a look at what I’ll be eating.

Mighty Quinn’s is setting up shop in Yankee stadium and if we’re being honest I’ve never been a big Mighty Quinn’s fan. The food is good but I just don’t trust a BBQ place without mac and cheese. A man has to have a code. Quinn’s is bringing a lot of classic BBQ dishes to Yankee Stadium in pulled pork, wings and brisket, but there are two that really peak my interest. Those are the Brontosaurus Rib and the S’mores Bread pudding.

It’s tough to get excited about Bareburger coming to Yankee Stadium with about 50 locations around the city. Without anything special that you can’t get at one of their normal location, this feels sort of mailed in. Really the only benefit I see is that there’s a vegan option.

Last year we were introduced to the 2 foot cheesesteak and it looks like that’s been outsourced to Jersey Mike’s. I’ve never had Jersey Mike’s because I’ve lived in Philly before so I know this is likely similar to getting and Italian hero from Subway.

Out in left-center the Frank’s Redhot Terrace is a new patio for drinking. They’re serving up sliders that look like they’ll be better than the ones you could already get at the stadium because the meat will be fresher.

This is The Bronx so it’s about time they brought in a place making mozzarella in the stadium. It may surprise you that I’m not a huge vegetable guy but the options don’t look bad.

I fucks with steam buns heavy. A good steam bun is just a great experience because you start off with some that warm pillowy bun and then some kind of delicious asian meat, right in your mouth. Whether I did this web series or not, I would eat these all.

Lobel’s is the pound for pound champion of Yankee Stadium. For years, they have put out amazing steak sandwiches on a consistent basis for years and even went far enough to put a butcher shop in the stadium. This year the menu is expanding and expanding in a big way.

So, there we have it. These are the new food items at Yankee Stadium this year that I’ll be eating. I’m also excited for a few things I missed last year like the breakfast sandwich cart, that could be clutch for hungover 1pm games.

I’ll be eating almost everything at Yankees Stadium this season and have trips planned to Camden (Saturday), Fenway, Citi and Wrigley so far. Videos will go out on Twitter first (no more Youtube) so follow me to see the videos first.