Author Note: I wrote this blog on Tuesday, April 4th of 2017 and I repost it every year. It’s Masters Week baby, best week of the year. 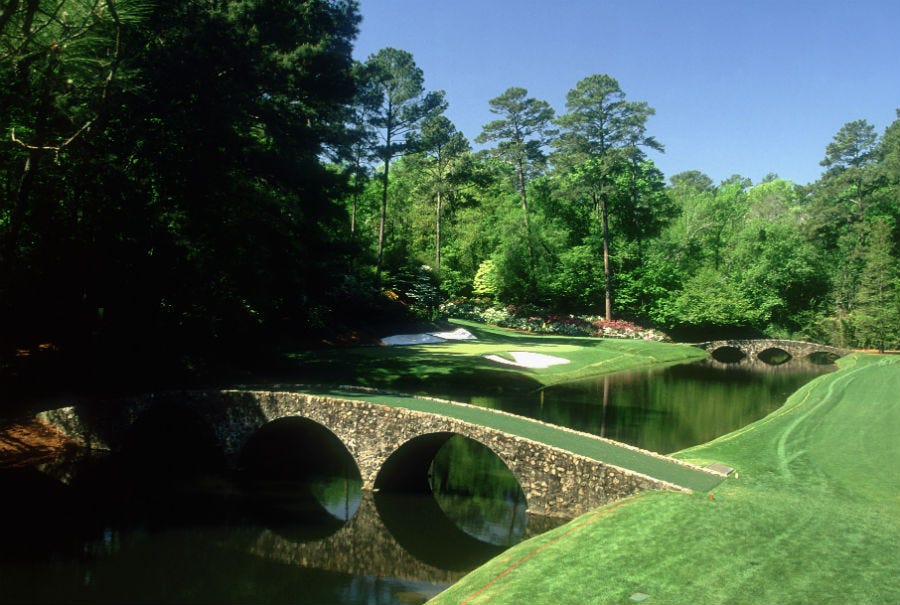 I’ve been a massive fan of golf since I was about 10. I joined a summer league with a couple of my buddies and I was hooked, despite being absolutely terrible. No more than 1 out of 4 of my shots got airborne. It didn’t matter — I was hooked and have been ever since.

Naturally, the Masters has always been my favorite event. Yeah sure we can hoot and holler about spring time and azaleas but in reality it has a lot more to do with Eldrick. Tiger won his first Masters when I was 10 and that tourney ever since has been my number one bucket list event on planet earth and it’s not even close. My dad’s been telling me the story about how Larry Mize chipped in on 11 to win in a playoff over Greg Norman in the ’87 Masters every year since I was born and does it like I’ve never heard it before. Honestly I think he thinks I don’t know Larry Mize chipped in on 11 to win the ’87 Masters.

When Augusta finally allowed the Tiger Woods video game franchise to put the course in the 2012 version, I cancelled life that day and played the course over and over and over again (shot 72 my first round, a horrific score in the video game, after I made a heartbreaking double on 18; sprayed it right trying to cut the corner, couldn’t recover; I was so nervous).

I’ve registered my name for the Masters ticket lottery every year for a decade — never received good news. I’ve floated with my dad, with my brother, with different groups of buddies over the years, the idea that we’re just going to say fuck it, buy tickets, rent a hotel room hours away, and go down just to see Augusta for a day. One day.

But we’ve never followed through.

When I found out 6 weeks ago we were going to the Masters I actually didn’t believe it. Seriously, I didn’t believe it would actually happen. I figured the deal would fall through or the podcast would fail or Dave would just flat out call me one day and be like “lol nope, you’re not going to Augusta we need someone to fill in on the Rundown all week so they can listen to me talk about the Patriots in April.”

But I was wrong. I tip-toed real cautiously aka boondoggled my ass down to Sawgrass for a few days and next thing I know, we’re here.

Today was my first day wandering the grounds of Augusta National and this is what it was like.

We headed in around 10am. The place doesn’t allow cell phones on the property so we left our gadgets with Rob, got dropped off at one of the gates, and said see ya later.

Even the patron walkways are immaculate. They wind through Augusta National’s free parking lots which are covered with flawlessly green, well-cut grass. The gravel serving as roads and walkways is a copper color, reminiscent of the pine straw that lines much of the course.

The whole entrance process is very efficient. That’s a theme.

We entered through the north gate, spitting us out first at the practice facilities. First spot I noticed was where Tiger stood between a few trees a couple years ago, bopping to some tunes, proving he had ridden himself of the chipping yips.

Despite being relatively new, even the practice facilities feel historic. They feel sacred.

Next we walked by some concession and the golf shop (which may be the most popular place on the property) before finally turning a corner and seeing the giant oak tree guarding the clubhouse. 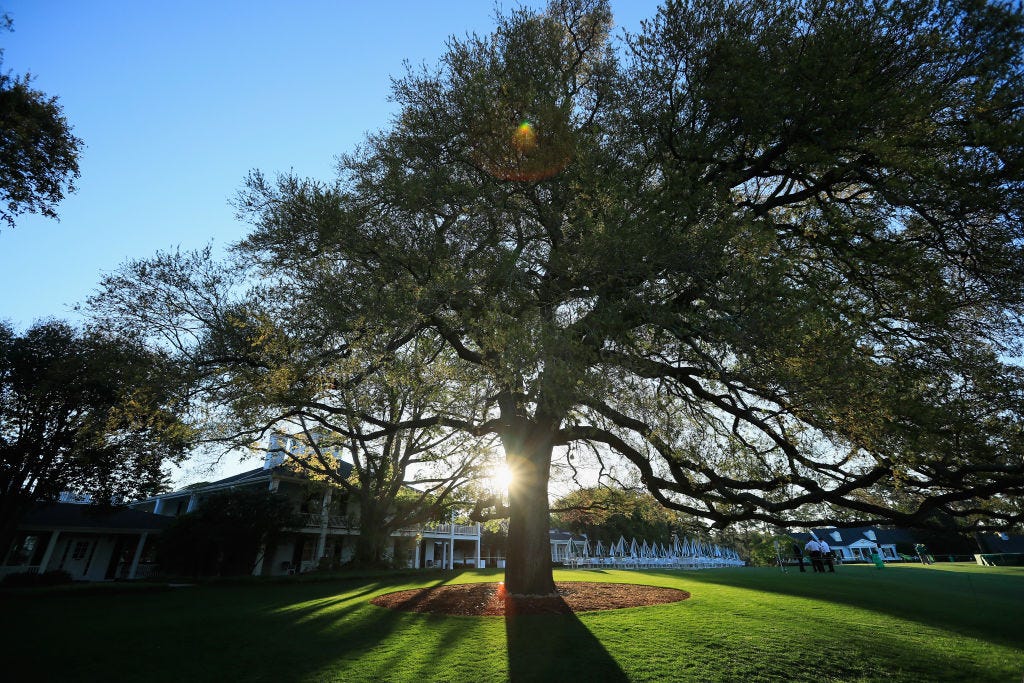 This is the point where you’re first stunned. From the oak tree you can look out from atop the hill and see a shockingly open terrain. You can see over the first tee, the ninth green, the second green, the seventh green, the eighth tee, and even some parts of the back nine between trees. It’s unreal. For a place known for its tall Georgia pines and winding chutes, I never expected it to be so open. You can see for what feels like miles — just perfectly green grass and white bunkers for miles.

We sauntered our way over to the 18th green where a kind Stoolie informed us that you can just hop into anyone’s seats. People get out there early, put folding chairs down, then bomb around all day. So we plopped down in some other poor souls’ seats and watched a few groups play in. It was lovely.

Then we dropped behind us to check out the 10th. The drop from the tee to the landing spot in the fairway, and the severity to which it doglegs left, is unreal. It looks much more like a Colorado black diamond ski run than a golf hole; it’s awesome. 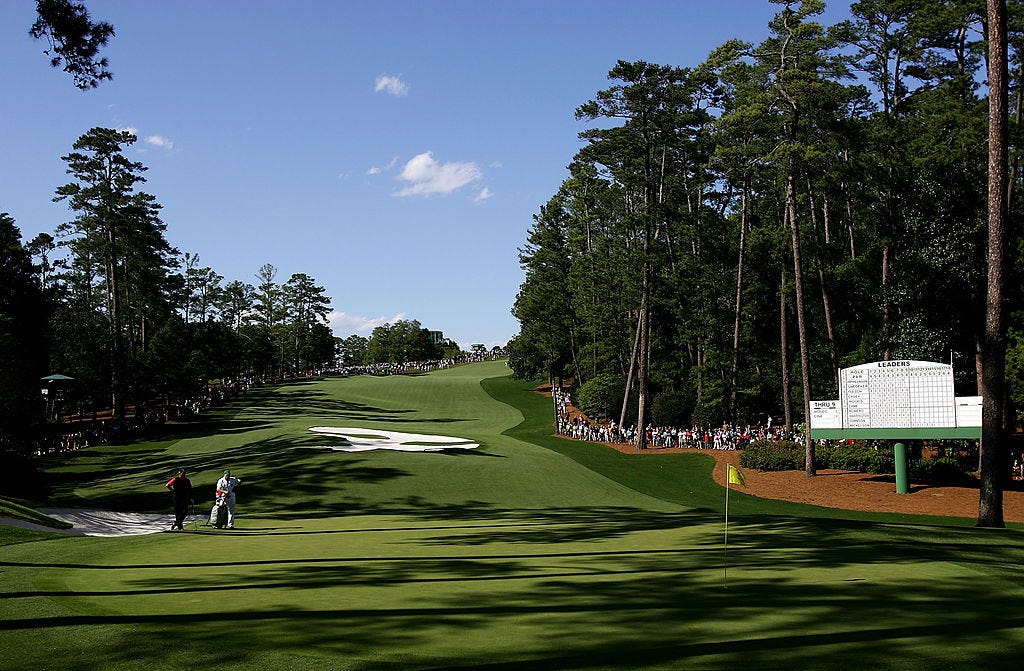 Before we knew it, we were walking along the 11th fairway and down towards Amen Corner. Again, the severity of the slopes, hills, and bumps on 11 are unexpected. From the approach spot on 11, it feels like you need to sling the ball 100 yards right of the green to take a hill and get it near the putting surface and avoid the water. And some guys basically do. 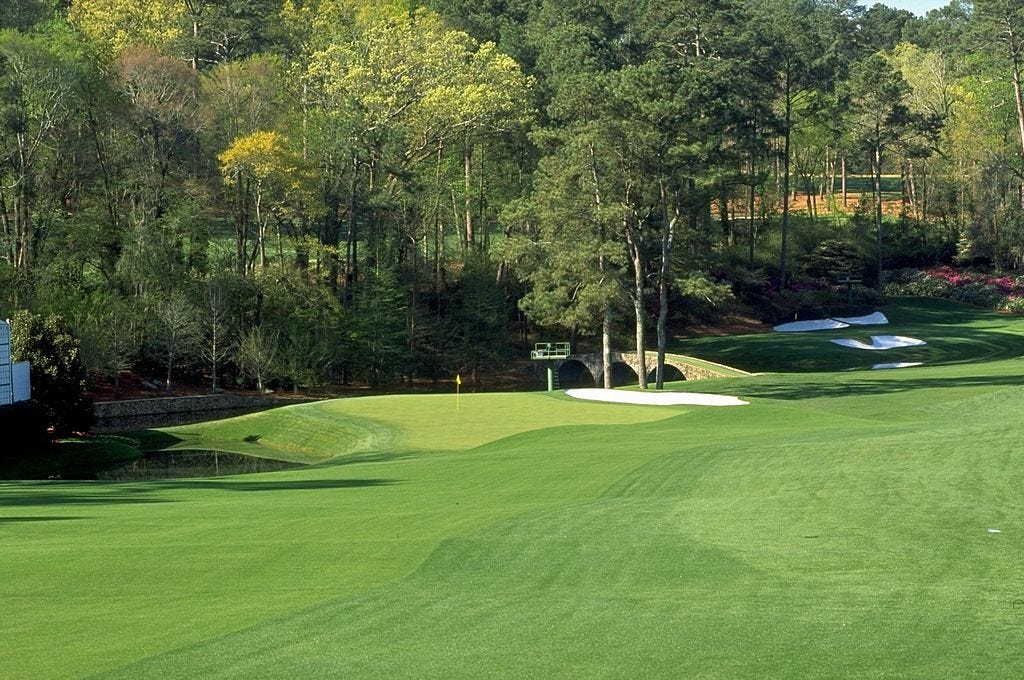 Patrons are only allowed to make it down to the back end of the 12th tee box. From there you just stand in awe of that hole. Trent and I are pretty talkative guys — we literally have a podcast where we just talk for over an hour; we do another one with our friend Smitty — and we stood right next to each other without saying a word for about 15 minutes. Just stared at 12. It’s gorgeous. It’s peaceful. It’s quiet. It’s got a majestic aura the way it sits back in that corner of the course, surrounded by tall ass trees, protected by Rae’s Creek, and away from the patrons. It’s like an ancient painting that sits back in a room, alone, not allowing you or anyone else to quite get to it. A billion pictures could never do it justice but here’s one. 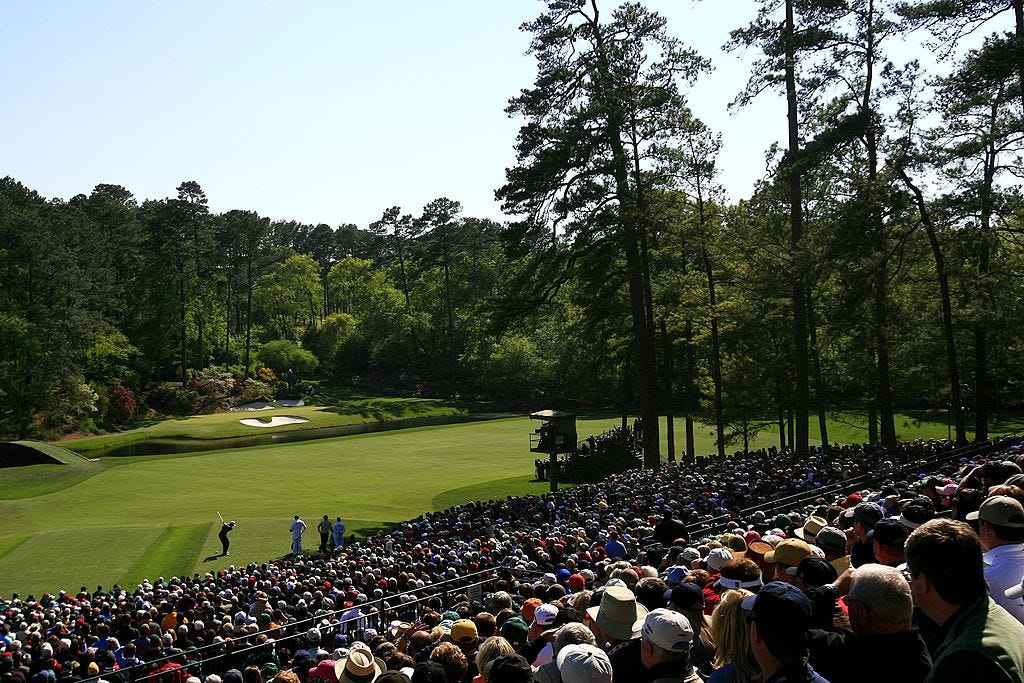 At this point we were thirsty as hell but looked to our right and saw Phil Mickelson rip an iron into 13 so we buzzed over that way. Impossibly, the setting at the 13th green may be better than the 12th. I can’t get over how the backdrop of the tall ass trees contrasts the openness of the rest of the layout. It’s like a refreshingly open feel within Augusta, then the tallest yet most elegant vegetation you’ve ever seen blocking the property from the rest of the world (and thank god, because Augusta the town is much, much, MUCH different). 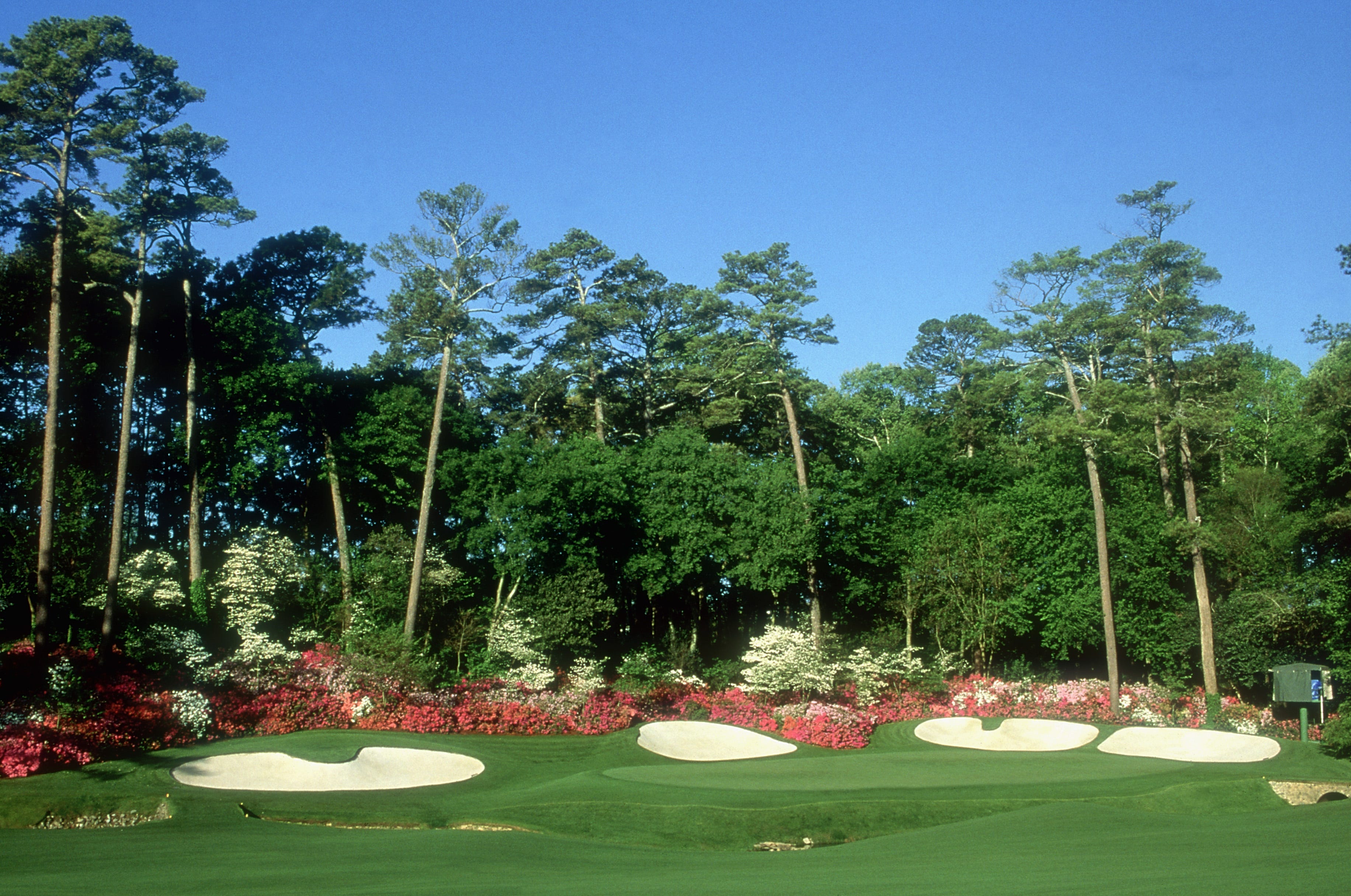 At this point we actually did need drinks. The concession is just as excellent as it’s played up to be: pimento cheese sandwich? $1.50 and the GOAT pimento cheese sandwich on earth. Masters Club sandwich? $2.50. Beer? They don’t even give it a brand they just call it “American draft beer” and it’s cheap yet delicious. You gotta love it. I even topped it off with a nice lemonade and everything added up to about 10 bucks. Highway robbery Augusta National thanks for coming out. 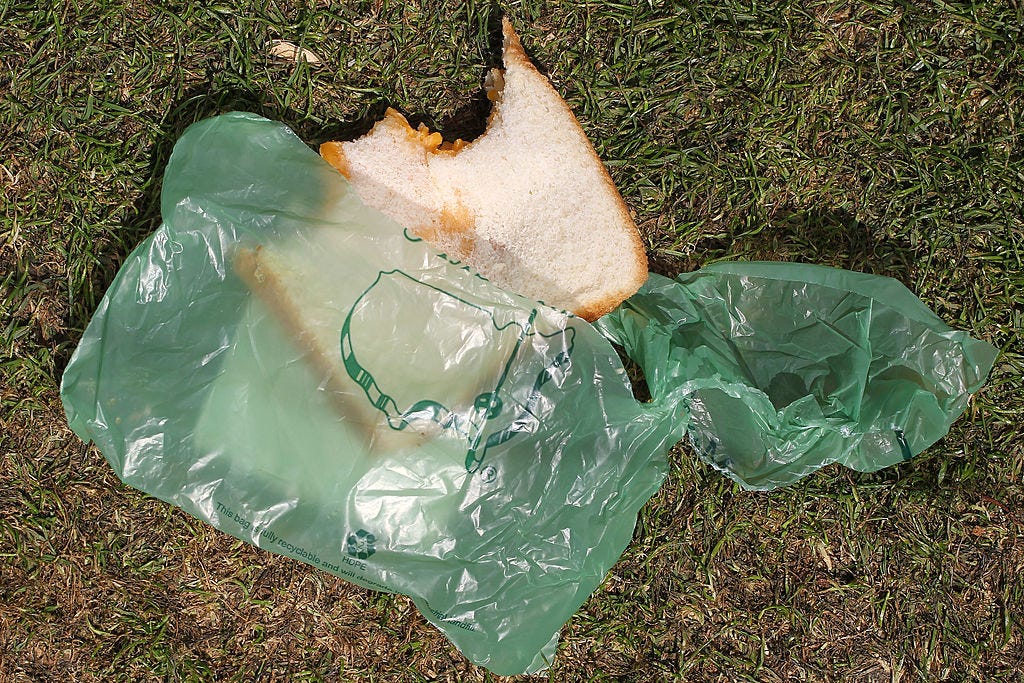 Also, I’ve never seen a more efficient concession operation in my life. Couldn’t even imagine it. They just have what they have, a short menu, and it’s all prepared and set out for you as you walk by. Massive line, feels like millions of people, you’re in an out in 5 minutes. It’s spectacular.

I mean, look at these places. 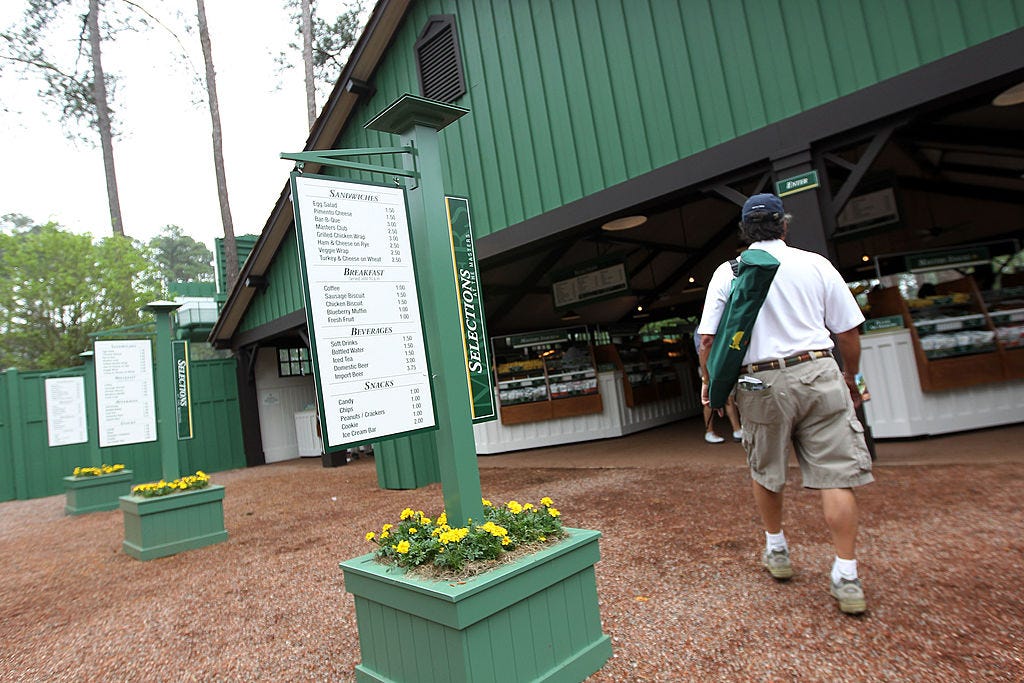 Then we stumbled over to the 15th green/16th tee area. I know this feels repetitive but basically every new hole you see, you’re star struck. Hitting a little wedge off a downhill lie on 15 fairway to the heavily guarded 15th green is BRUTAL (so was a long iron from a flat lie for Rory today, who rinsed his second shot on both 13 and 15). 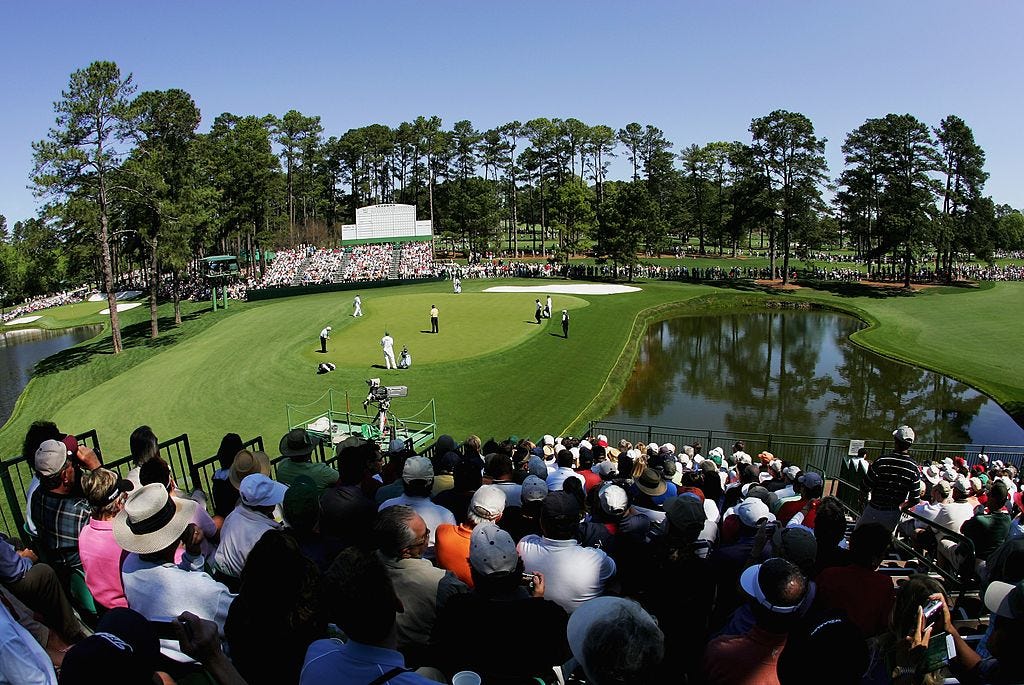 As is tradition, guys were skipping balls across the pond on 16. This was my first “Augusta roar” experience. No joke, you can hear the crowd loud and clear from the damn clubhouse when someone skips the ball across the pond on 16 (which is like a mile away) and it was only the Tuesday practice round. The roar when Tiger chipped in on 16 in 2005 must have sounded like they all got struck by lightning. I have chills writing this just thinking about it.

From there we hopped over to the front nine. Checked out 6 (tee perched up with a valley in between, then the crazy undulating green is a hell of a sight), 5 (I think there’s a new front pin), 4 (walked right by where Phil hit righty out of some bushes), 3 (Bernhard Langer ripped a hybrid; German’s still got it), and 2 green (we saw Zach Johnson and Trent went bananas).

Eventually we circled around and made sure we caught the entire course. Didn’t miss an inch.

The greens are absurd. You can see from hundreds of yards away how undulating they are. I know it’s cliche to say but what TV makes them look like to what they are in person is a laugh out loud difference.

There are mounds everywhere. Guys never have a flat lie. In the middle of 13 fairway? The ball’s at your head and you’re taking a baseball swing. Fairway on 10? Same deal. Left of the green on 8? There’s a damn mound higher than the flagstick. Seriously, it’s like 2x the height of the flagstick. 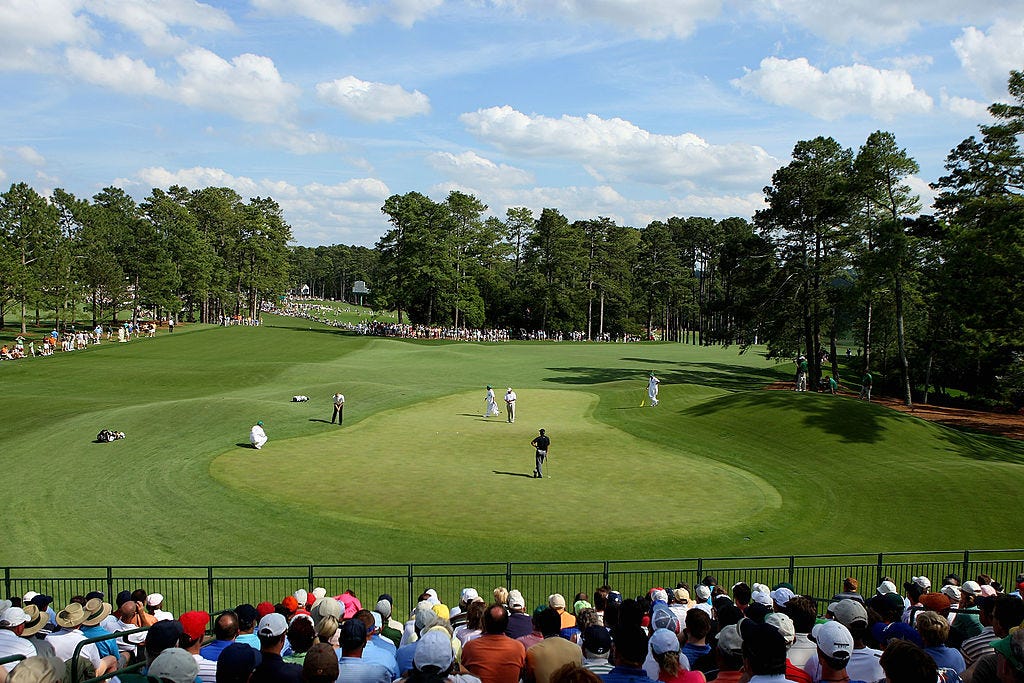 The 18th green is smaller than I thought. It looks pretty huge on TV but in person it looks tiny.

It’s windy as hell and always from different directions. They weren’t kidding with the swirling winds jargon.

The food is amazing and costs basically nothing.

The trees are tall as hell.

The overall terrain is very open.

The cabins all look nice but I’ve never been inside or even close to inside them.

After seeing the whole track, we headed out and let Octagon Bob head in.

What a run that little 18-year-old is on.

And what a week it’s going to be. Best week of the year folks.