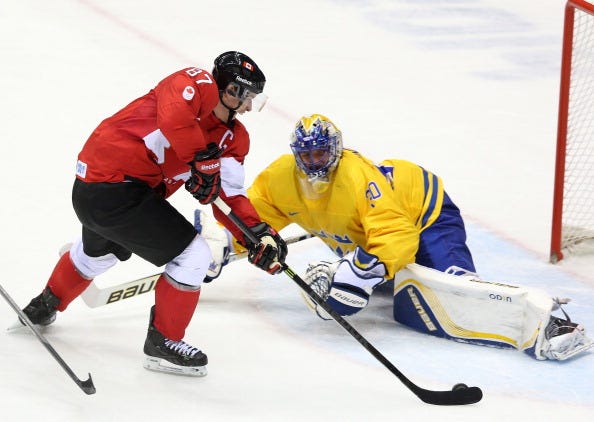 Sportsnet – The NHL will not participate in the 2018 Pyeongchang Winter Olympics, deciding to make the announcement now so it doesn’t overshadow the playoffs, Sportsnet has learned.

On Monday afternoon the NHL released the following statement:

“We have previously made clear that, while the overwhelming majority of our Clubs are adamantly opposed to disrupting the 2017-18 NHL season for purposes of accommodating Olympic participation by some NHL players, we were open to hearing from any of the other parties who might have an interest in the issue (e.g., the IOC, the IIHF, the NHLPA) as to reasons the Board of Governors might be interested in re-evaluating their strongly held views on the subject. A number of months have now passed and no meaningful dialogue has materialized. Instead, the IOC has now expressed the position that the NHL’s participation in Beijing in 2022 is conditioned on our participation in South Korea in 2018.

And the NHLPA has now publicly confirmed that it has no interest or intention of engaging in any discussion that might make Olympic participation more attractive to the Clubs. As a result, and in an effort to create clarity among conflicting reports and erroneous speculation, this will confirm our intention to proceed with finalizing our 2017-18 Regular Season schedule without any break to accommodate the Olympic Winter Games. We now consider the matter officially closed.”

And just like that, this issue has finally been put to rest. Ever since the Sochi Olympics ended, the NHL’s status with the 2018 Pyeongchang Games has been up in the air. It’s been years of players talking about how much they want to play for their country on the world’s biggest stage. And years of both Gary Bettman and team owners being a bunch of schiesty weasels trying to come up with ways out of sending their best players to South Korea for a couple of weeks in the middle of the season. Years of each side passive aggressively trying to undermine the other. Years of this back-and-forth argument that nobody could come out of on top. And finally, the NHL dropped the hammer today and said that the 2018 Winter Olympics will not be on their schedule and instead told the IOC to suck their cocks. Honestly… I’m a little surprise. Like we always knew that this was going to be a possibility but I just figured that Bettman would cave in the 11th hour. Instead, he stuck to his guns and the NHL will not be participating in Pyeongchang.

As for the Olympic tournament itself, yeah, obviously it sucks. Obviously it would have been great to see a US team led by kids like Eichel and Matthews and Gaudreau alongside of guys like Patrick Kane. Obviously you want to see the world’s greatest come together in the Olympics. Obviously it won’t have the same allure as it does in years previous. But I think I’m okay with the NHL taking a quick break from the Olympics. I’ve said this before and I’ll say it again. The World Juniors is the best tournament that hockey has to offer year in and year out. Without the NHL’s participation in Pyeongchang, we’ll essentially just get a double dose of the World Juniors. There’s still plenty of talent outside of the NHL. There’s still going to be great hockey to watch and you’re still going to get to go America all over everybody’s ass. (Or Canadian for all you hosers up North). It won’t be the same tournament but there’s still going to be some A1 quality hockey to watch for 2 weeks at weird ass hours of the day. The biggest loser in this situation isn’t the hockey tournament at the Olympics. It’s the public image of the NHL.

For being the least popular league of the 4 major sports, the NHL has this bizarre sense of entitlement. They’ve had 3 work stoppages in the past 20 years. The 2004-05 season was completely cancelled. They just had a shortened season a few years ago. And now they’re giving double middle fingers to the world by not sending their players to the Olympics. It’s like they’re doing everything they possibly can to keep hockey a niche sport. They continue to test their core fanbase to stay with them and continue to push others away. And if they completely rule out individual Olympic participation, it wouldn’t shock me to see some guys step away from the league for a year. At least the European players who can make good money playing in their home country during the Olympic year, specifically the Russians. All I’m saying is the NHL isn’t this big massive corporation that owns the world like the NFL does. But for some reason they act like they are and there’s a nice little PR shit storm on the horizon in their forecast.