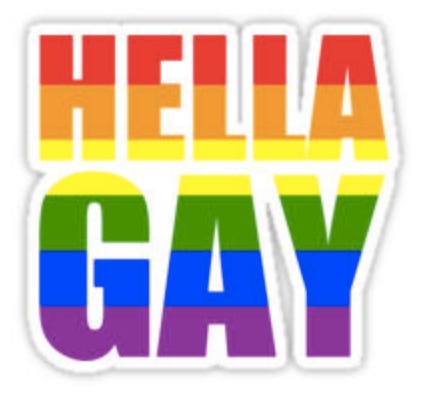 Give it back, gays. Give it back right the fuck now. You can’t culturally appropriate god’s colors and make them all gay and shit when you know damn well god is no fan of yours. That would be like black people taking the N-word and… bad example.

Straight, white people always get in trouble for culturally appropriating things so I’d like to thank Bryan Fischer for bringing this issue to the forefront. The gays are a bunch of thieves. In fact, not only did gays steal the rainbow, they also stole the word gay. It used to mean happy, when I was a kid it meant lame, now it means a man making love to another man. That’s not right. What about kissing dudes? Somehow that’s their thing now? Can’t even give a fella a little smooch without everyone saying you’re trying to be a part of gay culture anymore. They also took dancing and being in a generally good mood. You walk down the street in 2017 with a smile on and it’s immediately assumed that you’re a gay boy. As if it’s some kind of signal, like a toe tap under a bathroom stall. Men are angry and sit in dark rooms, gay men are happy and smile.

Somehow homosexuals have stolen all of these things from straight men and until today no one’s said boo. It’s bullshit if you ask me.