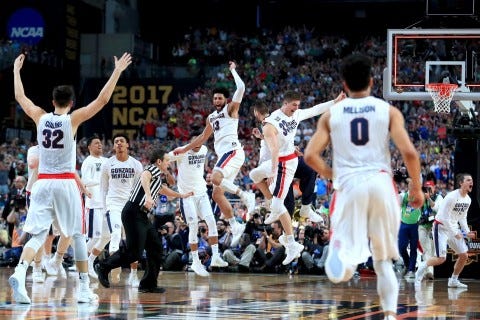 This feels like one of the more equal title games in quite some time. We have the two most complete teams in the country, who were top-10 pretty much all year going against each other. It’s rare that happens and it’s awesome when it does. So, we’ll be looking at a bunch of different angles of this game, including individual matchups, advanced numbers and things to watch.

Gonzaga and UNC are two of the top-12 offensive teams in the country, which makes it more fun to talk about than some of the slower-pace teams. Both teams want to get up and down the floor offensively, as they average less than 16 seconds per offensive possession. Both teams take care of the ball and shoot well inside the 3-point line. But, how do they get there? What sets will we see run tonight? This will take a look at both offensive sets. To start here’s a graph of what these guys like to run throughout the season, which is used as the basis for this: 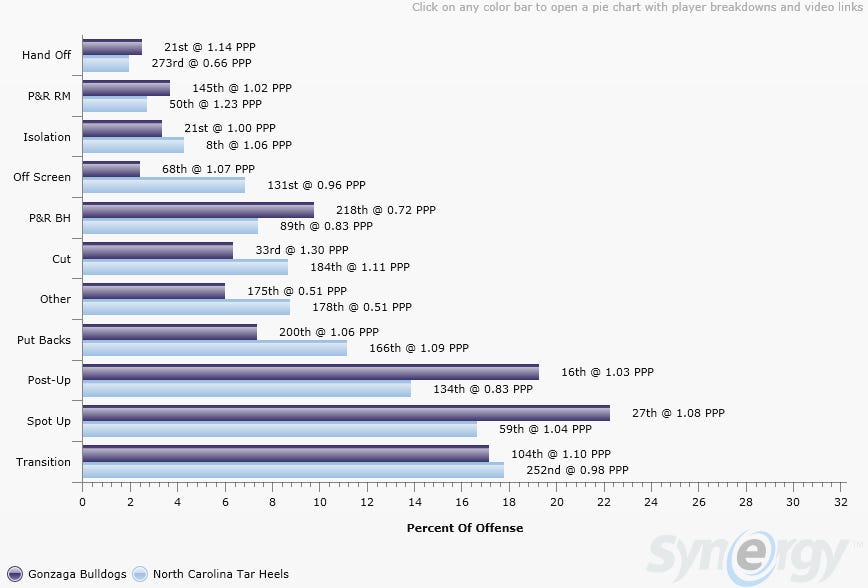 Gonzaga on Offense: North Carolina will run man-to-man 99 percent of the time. The only time you will see a change in defense is after timeouts, UNC does like to trap – this dates back to early Dean Smith days and Roy has thrown a 2-3 zone the last two games for a couple possessions with less than 5 minutes remaining in the game. Just keep an eye for those two. However, with the standard man-to-man, it will let Gonzaga run its typical sets. They want to do two things. They want to play through the post and they want to bring Kennedy Meeks up and put him in high ball screens. When Gonzaga does throw the ball to the post, UNC will play it straight up. They won’t come with a dig, they won’t double and they won’t do anything crazy. This is how they defended Kentucky and Oregon. Roy will let his guys use their size to try and disrupt Karnowski/Williams/Collins. With Roy keeping his post play 1v1, it will be key for the wings not to lose their guys relocating. Jordan Matthews is an excellent shooter and hit four shots from three in the Final Four. Throw in the fact the other three guards all shoot between 38-40% you have to stay at home if Roy keeps the philosophy of not helping in the post. I’ve talked about it quite a bit but Karnowski is patient in the post and loves to find Nigel Williams-Goss on the relocation after the entry pass.

I expect Mark Few watched a couple of the Duke-UNC games, where Duke constantly brought Jefferson up high to set the ball screen. Meeks was lost on how to play up there and it led to some easy looks. Luckily for Gonzaga this is something they do quite often (over 300+ sets of high ball screens) and Karnowski is an excellent passer from the high post. I use Karnowski here because that’s who Meeks will be matched up against. Hicks will draw Williams to start. Gonzaga will set these screens anywhere on the floor too. Look here against Xavier. Williams-Goss catches the ball in the corner, where Collins comes out and sets the screen, letting NWG use his floater to finish. With UNC having Pinson or Jackson guarding him, both longer and taller, expect to see this quite a bit to get NWG some open looks coming off the screen.

North Carolina Offense: The Tar Heels want to do three things. First, they want to run. They are at their best in transition and do a great job of getting spacing, with one big going to the rim and the other hanging out at the top of the key either setting a flare screen or running a hi-lo. For a team that runs the traditional lineup for two bigs it’s actually damn impressive how good they are in transition. When they aren’t running they want to beat you on the offensive glass. Finally, in the halfcorut they want to use Justin Jackson’s height advantage and ability to simply get buckets. I am curious to see how Few decides to guard Jackson. They play three guys who are under 6’5″ while Jackson is 6’8″. Williams-Goss is the best perimeter defender for Gonzaga, so it wouldn’t shock me to see him on Jackson with Perkins on Berry to start and Matthews on Pinson. You’re going to give up height regardless, so you want your best defender on Jackson and NWG doesn’t have to worry about crashing the glass if he’s on Pinson, letting him start transition. Look for Roy to try and get Jackson out to the left wing early, which is his favorite place to shoot from. Gonzaga does a great job of limiting transition, so in the halfcourt, Jackson will run off some off-ball screens to try and curl to that wing spot. Here’s an example of Jackson getting out in transition to the left wing and having no problem stepping into a shot as Dorsey is a second late:

I do think you’ll see Gonzaga make a huge effort to get back defensively. It’s what they do well and you’ll see just guys like Karnowski or Williams crash the offensive glass. So if UNC has to play in the halfcourt look to see more cuts and flashes than ball screens. UNC actually ran more cuts and flashes that pick-and-rolls during the season and they were quite effective at it. The Heels scored 1.151 points per possession or 58.8% of the time they ran one of these plays. Most of these cuts and flashes are for the bigs, so look to see if they can catch Karnowski flat footed from time to time. This is where Joel Berry needs to be more the ‘traditional’ point guard. He struggled shooting in the Final Four. If he continues to struggle tonight he needs to try and drive and look to the short corner like Britt did here with Hicks.

Pick: I’ll be doing some more previews, but might as well put my pick at the bottom of each one. I’m taking Gonzaga +2. They are more balanced on the offensive side and I believe they can control tempo forcing UNC into the halfcourt, where they can struggle at times. Plus, Gonzaga is a great defensive rebounding team taking away what UNC does best.