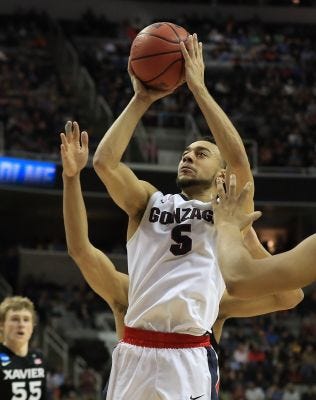 Well, that was a great way to start Final Four Saturday. Gonzaga was in control of the game the entire time, up as much as 14, but South Carolina was able to make Gonzaga uncomfortable and take a lead in the second half. The real story here though starts with how smart Mark Few is down the stretch. The biggest question it seems like year after year is whether to foul or play out the clock when you’re up three. The correct answer is to foul and Few did just that and it paid off. He pressed with just over 12 seconds to go to force South Carolina to burn clock – again an incredibly smart move, before Perkins fouled with just over three seconds to go. That’s what you should do in that situation.

That game played out as all of South Carolina’s NCAA Tournament games have. They were down at half and used a big run in the second half. PJ Dozier was the catalyst for that run as he finished with 17 points to lead South Carolina. Yes, Sindarius Thornwell battled the flu this week but Gonzaga’s defense also did a great job of forcing him out to the 3-point line and crowding the lane if he looked to drive.

Nigel Williams-Goss was the best player on the floor though. He finished with 23 points, 6 assists and 5 rebounds and seemed to always hit a runner when he had to. The other name to remember is Zach Collins, who might be the only one-and-done in the Final Four and put up a casual 14 points, 13 rebounds and 6 blocks stat line.

Gonzaga’s offense was the key here though. They were able to beat South Carolina in the lane, which openend up the 3-point line for them. They were able to do it in a variety of ways as well, whether it was Williams-Goss coming off a high screen, hi-lo action with Collins and Karnowski or just running a 4-out, 1-in set and letting Karnowski pass out of the post. That’s how you beat this South Carolina defense. It’s what gave Gonzaga the big lead.

Watching this mountain jump until Monday: