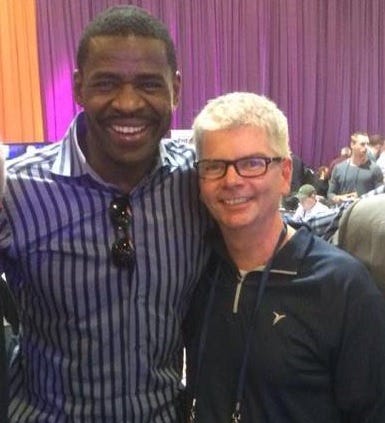 TMZ – Michael Irvin is being investigated for allegedly sexually assaulting a woman at a Ft. Lauderdale hotel … something he vigorously denies.

Law enforcement sources tell TMZ Sports, a 27-year-old Florida woman filed a police report, claiming she and the NFL Hall of Famer were out at a bar in the early hours of March 21 when they went back to the W hotel, where Michael was staying.

The woman says they were in Michael’s room when she began to feel sick. She says the last thing she remembers is fighting him off. She says when she woke up he was about to check out, leaving her behind. She took an Uber home and called 911 at 7:30 AM.

She told cops she feared she was drugged and raped. She was advised to go to a medical lab for a swab and a blood test, which she did.

She says she also texted Michael, asking him if they had sex. She says he responded that he wouldn’t do anything to hurt her.

Our sources say Michael, now an analyst at NFL Network, tells a very different story. … Michael says he had an early flight, was in the room for only 15 minutes and had no sexual contact with the woman. He also says another male was present.

He says the woman — a cosmetologist — texted him a day later saying, “Come for a facial when you get back to Ft. Lauderdale.”

Irvin’s lawyer, Larry Friedman, [says] “Even the complaint that she made specifically says she does not recall the events that took place. She was very drunk that night. Nothing happened and there was no assault.”

I’m going to start with something you rarely hear anyone say. But my relationship with Stoolies is based entirely on honesty, trust and love, so here goes: I can’t be neutral when I comes to Michael Irvin.

I hate sexual assault and unwanted sex with passed-out people as much as the next guy. But I love Michael Irvin. He’s one of my favorite celebrities. And probably my No. 1 football analyst. He was a regular weekly guest on my old WEEI gig and was without a doubt the most colorful, interesting and flat out hilarious interview I’ve ever gotten to do. One minute he’d be talking about how he once wanted to blow off school so his dad took him to his job as a roofer and made him work his ass off all day and how he still keeps the sweaty, dirty shirt he wore as reminder of what it’s like to work for a living. The next he’d be joking about his Cowboys days of coke-fueled hooker parties and being on probation. The next he wouldn’t hesitate to say how his mother’s death, at a different time in his life, might have made him relapse. In between you got better football insight then you could ever expect from all the TV guys who went to the Dan Marino School of Shallow Analysis. And he’s one of the few voices out there who admires what the Patriots have accomplished instead of trying to throw asterisks at them like ninja stars

So, yes. I admit it openly. I’ve got a pro-Michael Irvin bias. And hope there’s nothing to this. Right now it’s a pure he said/she said. And the fact she’s offering him a facial the next day (let’s just assume she means the cosmetologists kind) is for sure a good look for him. But the good news is that it shouldn’t be for long. Fortunately this 27-year-old did it by the book, went right to the police, did the rape kit and so we’ll know soon enough. The Playmaker and his lawyer are saying there was no sex at all, so there won’t be any gray area about consensual/non-consensual, which 99.9% of these cases deteriorate into. CSI will find baby batter in there or they won’t, and then we’ll know who’s lying, open and shut. And with any luck, this will all be a wacky misunderstanding and a nice teachable moment about knowing your limits in her case, and the hazards of bringing a passed out drunk woman half your age back to your hotel at 4:30. Then there’ll be hugging and learning, roll credits.

I sure hope so. I don’t like having my close, personal, NFL Hall of Fame friends be rapists.