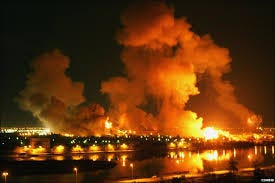 Over the years, the launch of the war in Iraq has been referred to as Shock and Awe. Shock is awe is #actually a military doctrine “based on the use of overwhelming power and spectacular displays of force to paralyze the enemy’s perception of the battlefield and destroy its will to fight.”

This doctrine was named in 1996 but has been employed for ages. When we talked with World War II vet Stanley Rubin on Zero Blog Thirty, he mentioned the Shock and Awe that the US conducted before the invasion on Iwo Jima. You bomb the ever loving shit out of a place before you enter. Most scatter. Few remain. They are all war-weary and sleep deprived (unless they are bunkered in miles worth of tunnels like in Iwo.)

Lots of has changed since 2003. The world is a completely different place. Iraq is forever changed and so are the hundreds of thousands of American troops who have spent time there.

You’ve got to be an absolute maniac to be a war time journalist in Iraq trying to get video. Just out of your fucking mind. Across the river or not. No way. Just no damn way.