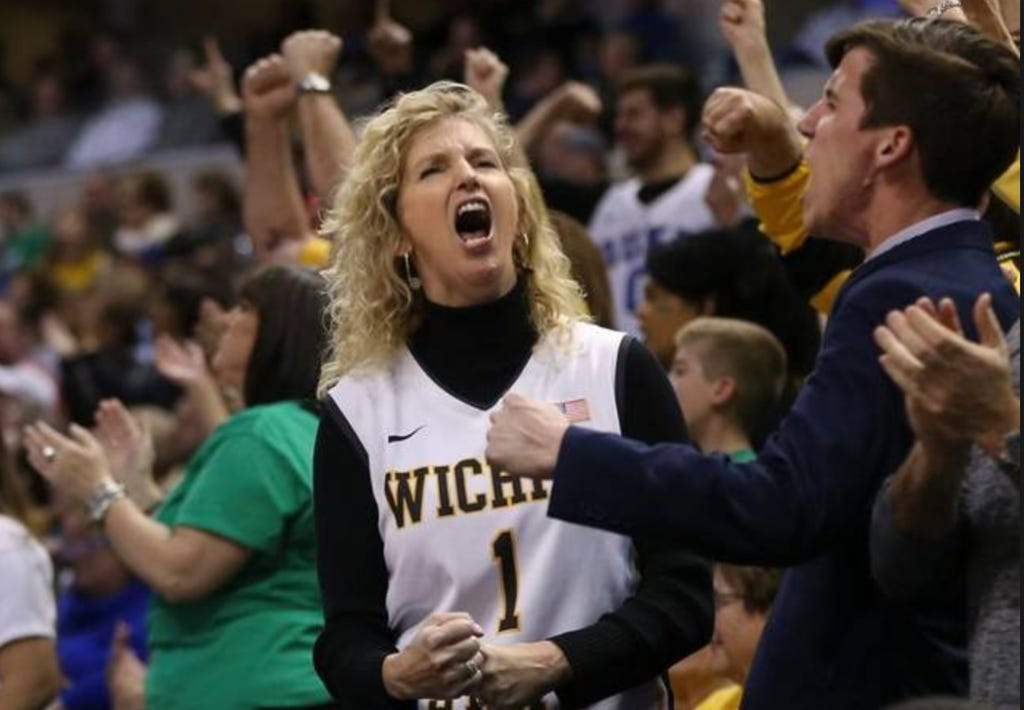 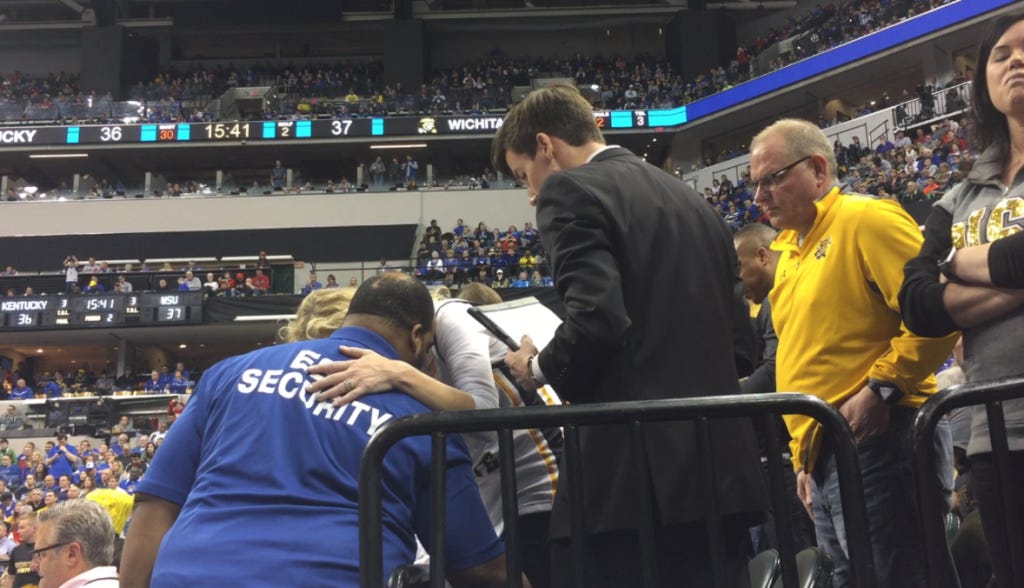 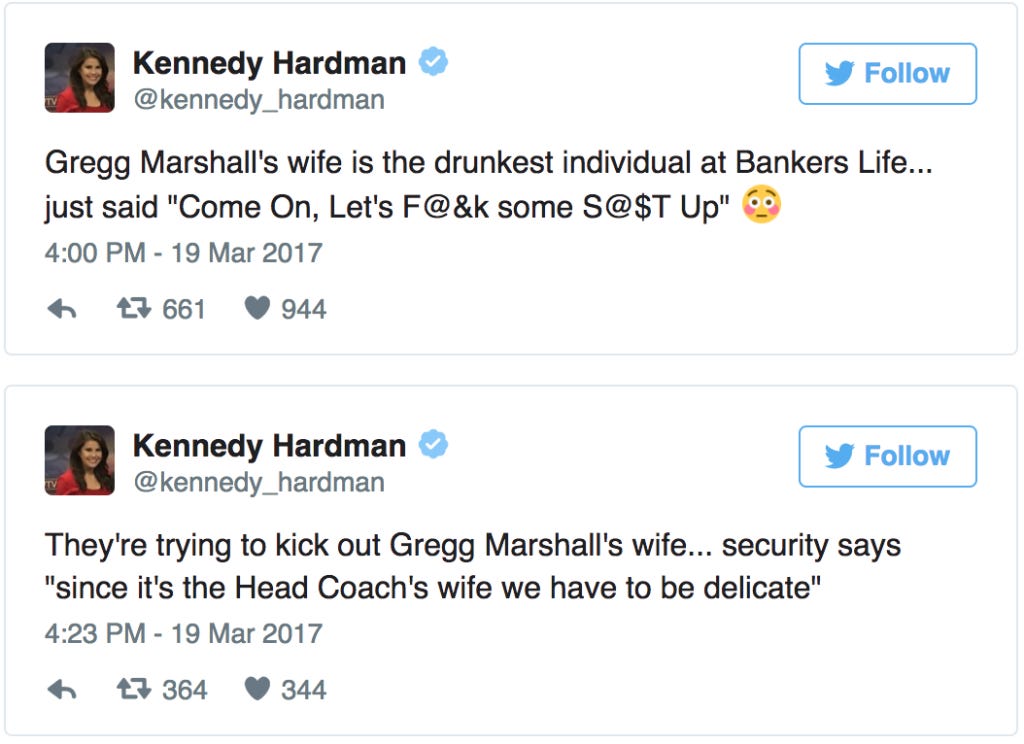 INDIANAPOLIS (AP) — A security guard asked the wife of Wichita State coach Gregg Marshall to leave the lower bowl of Bankers Life Fieldhouse after she started loudly cursing shortly after Sunday’s 65-62 loss to Kentucky in the NCAA tournament.

A police officer was eventually called and followed Lynn Marshall up the steps. She later was taken back to the playing level on an elevator so she could attend her husband’s news conference.

NCAA spokesman David Worlock says it is standard procedure for the wife of a coach to be escorted to the press conference but it is usually done by school officials.

KSR – We had some fun sitting next to the Wichita State section and it almost cost me my NCAA credential, which I intend to use next weekend in Memphis and then again in Phoenix.

It all happened when I shared a video of the craziest woman in the arena, who happened to be right next to me, and who happened to be the wife of Wichita State head coach Gregg Marshall. It didn’t take long for the tweet to get to her and that’s when all hell broke loose.

Someone from the NCAA came and got my name and told me I could no longer tweet about her because “it made her upset.” I guess it didn’t make anyone else upset when she told Malik Monk to get in the weight room or told Isaiah Briscoe to buy some bigger shorts or told Calipari to “shut the f-ck up” or told Roger Ayers he is garbage or any of the other classy things she yelled between F-bombs.

The poor security guard made multiple attempts to calm her down before calling for help and then deciding “we have to be delicate because she is the coach’s wife.”

Horrible looks all around for what was otherwise a top 3 (maybe top 1?) game of the entire tournament so far. First, the coach’s wife being so wild and out of control that security had to actually usher her out of the stands – total un-coach’s-wife-like move, Tammy Taylor would never pull that shit. 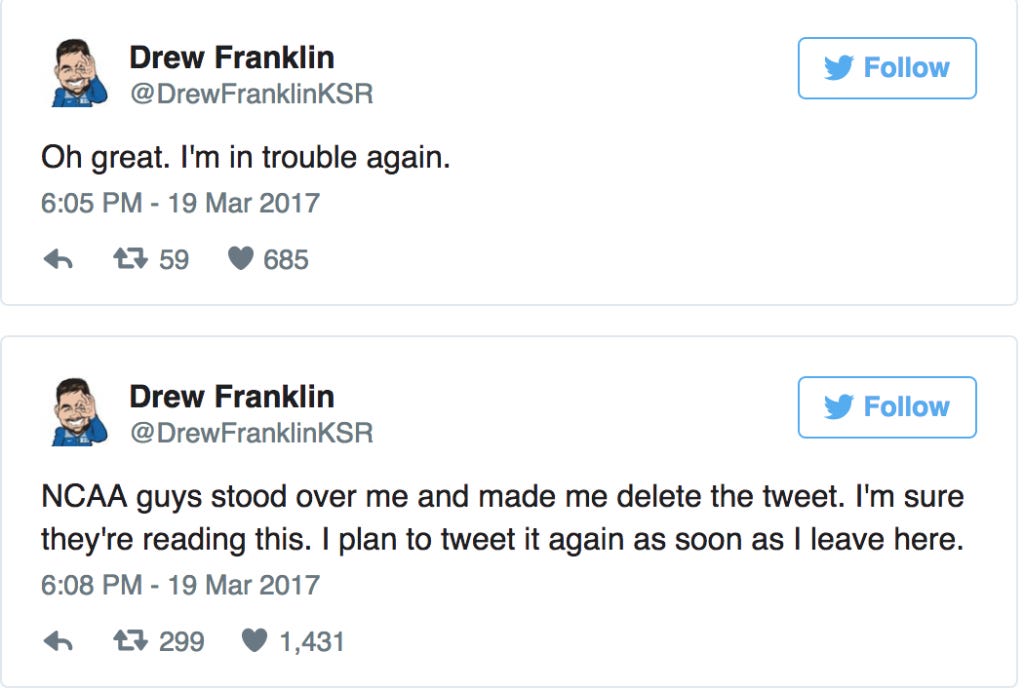 Second, the NCAA going around like the Gestapo and rounding up all the video evidence to delete it off the internet. Some Big Brother 1984 shit. It’s 2017 guys, you can’t keep anything from going public, let alone a coach’s wife flipping out in the stands to the point she was forcibly removed.  Haven’t seen a move that out of touch with the times and the technology since Lebron tried to scrub all the footage of him getting his ass dunked on at summer camp.

Poor Gregg Marshall. Fucked over by the committee once again. Forced into a brutal second round matchup. Loses a close one. Gets cucked by his obnoxious wife.