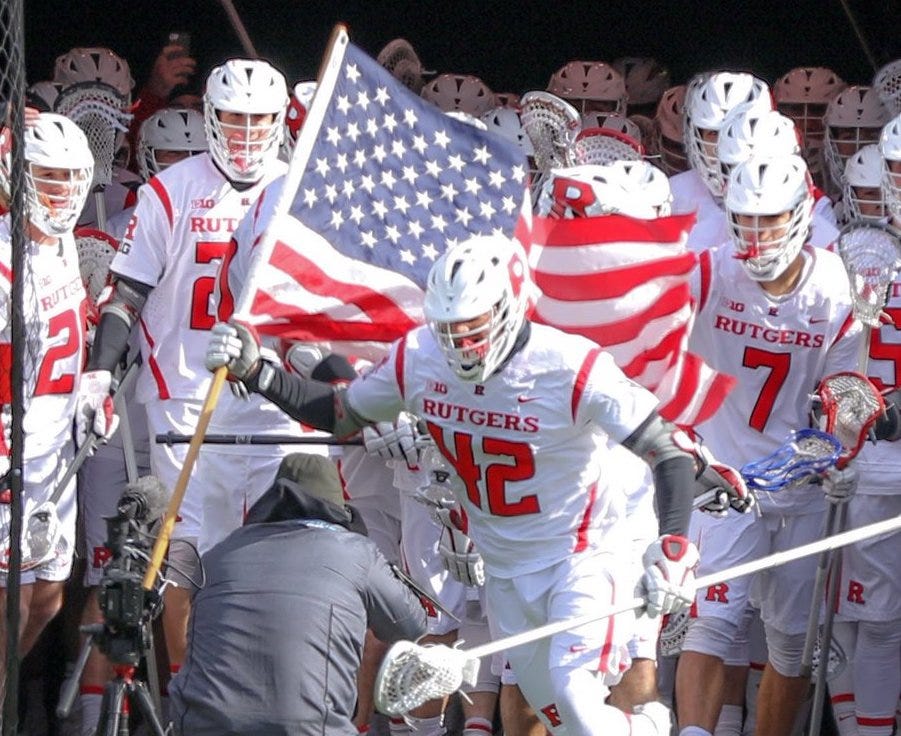 What we saw happen over the last week in college lacrosse is the kind of thing that makes me extremely confident in doing my job. Why is that, you ask? Well because nothing makes sense anymore. You can’t predict shit in college lacrosse after last week. Hofstra over UNC. Richmond over UNC. Towson over Hopkins. Michigan over Penn. Duke doubling up Loyola. Syracuse barely getting by St. John’s. On any given day, any team can beat anybody. And that gives me a free pass to be wrong in my predictions all I want. Because if I get something wrong, I can just chalk it up to how crazy and unpredictable this season of college lacrosse has been. This is a paradise for idiots like me. You want to talk about rankings? Well sure, we can do that but just as long as you know that these rankings essentially mean nothing because a #20 team can jump up to the top 5 after any given weekend. But here they are anyway. 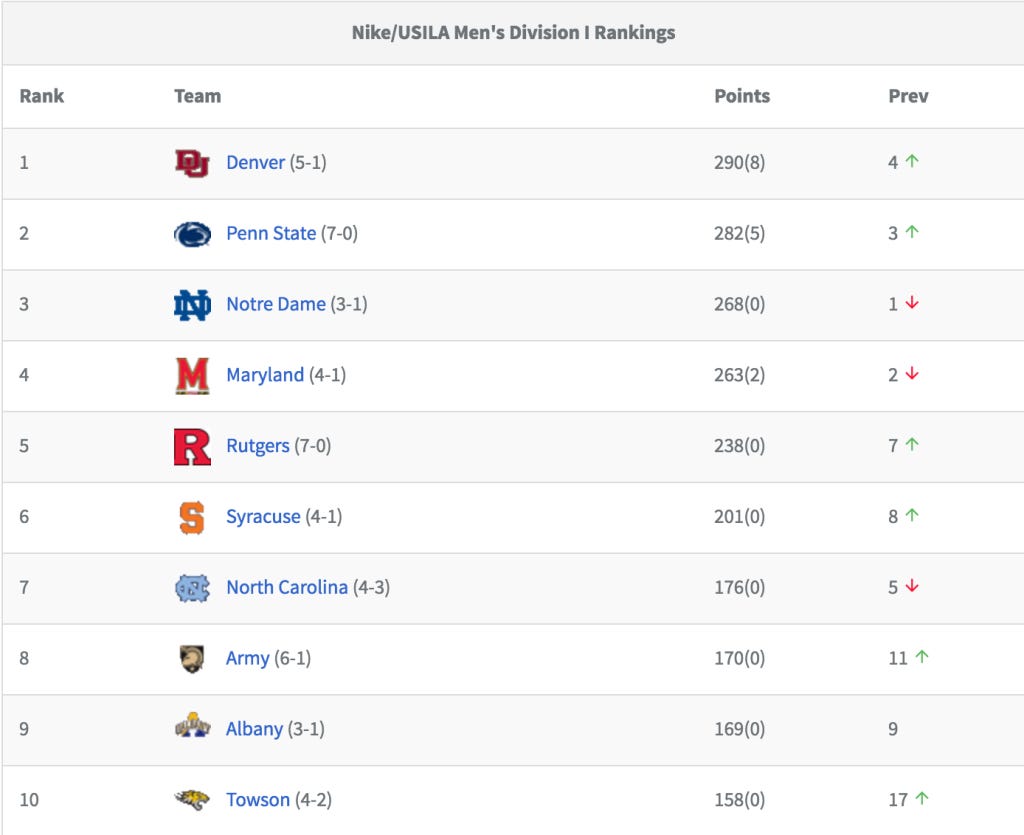 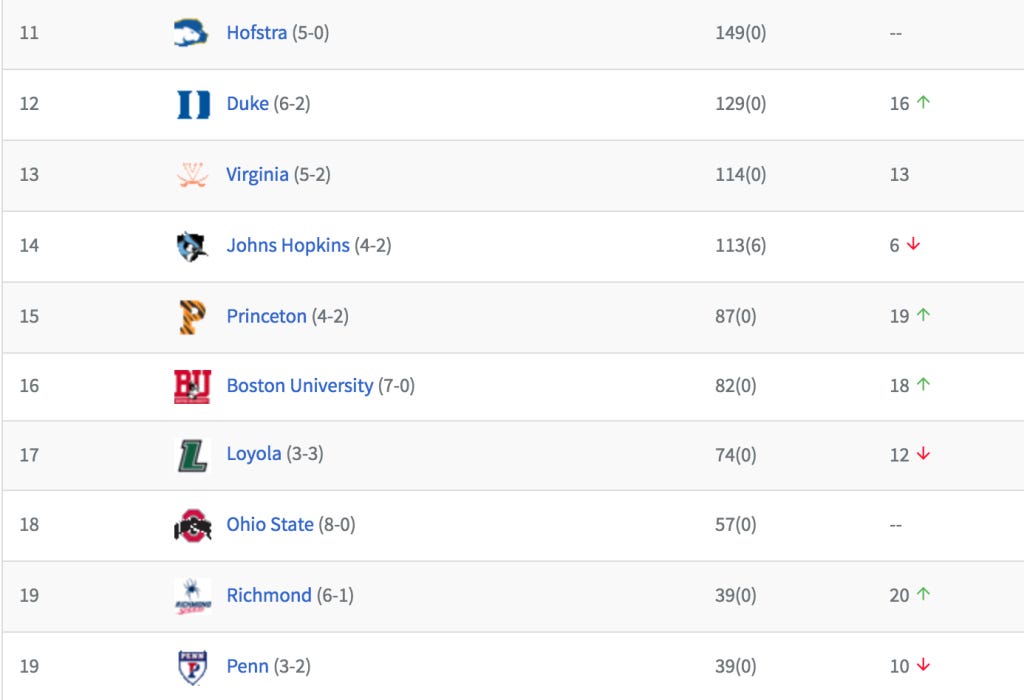 Denver jumps back into the driver seat at #1 after Connor Cannizzaro put Notre Dame away at the buzzer. I blogged about that game on Monday so here’s the link in case you missed it. The biggest movement from last week is Hofstra jumping into the mix at #11 after being unranked. Clearly it was a god awful week for UNC lacrosse but they were ranked #5 when the Pride took them down at home on Saturday. 5-0 to start the season. A win over Princeton is looking much better today than it would before the season started. UNC was definitely the biggest game on their schedule and they came out with an 11-9 win. Providence, Stony Brook and St. John’s all this week. I think after next Saturday we see a 7-1 Hofstra team who will be staying right there around the top 10.

Next up we have Towson jumping up to the Top 10 from #17 last week.

Maybe I was a little premature when I declared Hopkins was back earlier in the season. That’s back-to-back losses for the Blue Jays after starting the year 4-0 and that drops them down to #14. And deservedly so. Towson waxed that ass in the 2nd half last week. They ended up losing to Ohio State on Wednesday in about negative 40 degree temperature so that probably won’t help them climb any further than #10, especially without any more games this weekend and Denver coming up next week. But who the hell really knows anymore.

Last week I said I honestly don’t know much about both Rutgers and Stony Brook. But now not only is Rutgers on the radar but they’re a top 5 team. A win over Stony Brook last Friday and then they followed that up with another win over Princeton on Wednesday. Here’s the Scarlet Knight’s stat line for that win.

Princeton is still a work in progress and caused turnovers should only count for half when the offense is playing in Siberian temperatures. But still. Rutgers puts up numbers game after game after game. They have NJIT today and Delaware next week. Both of those should be wins which means they’ll enter B1G play at 9-0. And from there it’s Hopkins, Michigan, Maryland, Penn State and then closing out with Ohio State. Which, if you’re looking at the rankings above is currently #14 then Michigan (receiving votes) then #4 then #2 and finally #18. Which brings me to my next question….

Just How Good Is The B1G?

There are 6 teams in the Big Ten in NCAA DI lacrosse. 5 are ranked in both polls with Michigan receiving votes. They are a combined 37-4 on the season with 3 teams undefeated still. Now I know a ton of purists out there like to ride or die with the ACC. Which, I mean, yeah. It makes sense. Notre Dame is a favorite to win the National Championship and they account for 2 of the B1G’s only 4 losses on the season. Other than that, there hasn’t been too much crossover. The record on the year is 2-1 ACC over B1G but Hopkins has Cuse and Virginia coming up. In all reality when you look at who is a legitimate contender coming out of both conferences right now you have Maryland, Penn State and Rutgers vs Notre Dame, Syracuse and probably Duke since you can never count them out come Tournament time. And I think I have to give the advantage there to the B1g. I think Notre Dame is probably the best out of all of them but conference vs conference, the B1G is just too good offensively. They have 5 teams in the top 20 for offensive production so far this year. The ACC has 2. And I know what you’re saying. Aside from maybe Maryland, defense is severely lacking in the Big Ten. But let me make myself loud and clear here….

THE BEST DEFENSE IS A GREAT OFFENSE

When your team is possessing the ball and killing it in the faceoff X and scoring at will, guess who isn’t scoring? The other team. So what if you have to win games 15-12 instead of 8-5? A win is a win. These teams score the shit out of the ball. Penn State is averaging 16 per game. Rutgers is almost at 14. Maryland is at 13 and they haven’t even been playing great lacrosse. You score at that pace and limit the amount of possessions the other teams get, you could throw a plastic bag in the net with popsicles sticks playing defense and still get out of there with a win. In closing, Denver and Notre Dame are still better than any B1G school right now but it’s foolish to say the B1G isn’t a legitimate power conference.

Here’s your full weekend schedule plus gambling odds via @LaxVegasLines 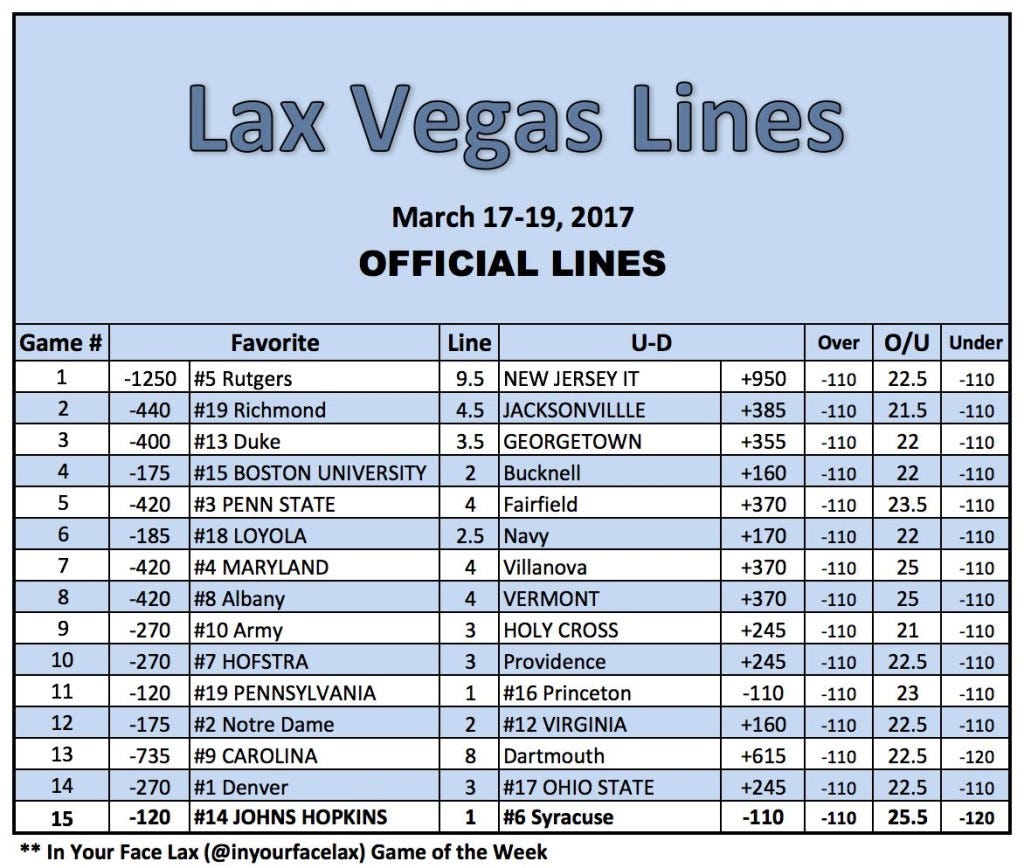 Richmond is going to get another win that doesn’t help them move up in the rankings. BU is going to get their first loss of the season with Bucknell needing a win after losing their last 4. Penn State vs Fairfield seems like there’s potential there for a trap game in the making but Penn State is at home and I think their underclassmen are having too much fun right now to take their feet off the gas. This week’s lineup doesn’t really get interesting until we get to Penn vs Princeton as Ivy League play gets going this week.

We’ve talked about Michael Sowers plenty already in these weekend previews but keep in mind this game is at Penn which is (technically) a homecoming for the freshman. He’s from the very outskirts of what can be considered the “Greater Philadelphia Area” but he’s close enough to where he’s definitely considered Philly lax. So you’ve got Sowers leading Princeton back to prominence in the Ivy taking on Penn who has taken a hit over the past couple of weeks with two 1-goal losses (Penn State and Michigan). I said the other week but we’re almost back to having the old Ivy League that we know and love. With teams like Princeton and Penn leading the way. We’re still waiting on Cornell to get back but things are starting to feel normal again after Brown and Yale’s rise to the top. Anyway, Princeton is averaging 14.3 goals per game and giving up 10. Penn is scoring 11.3 and giving up 9.5. Neither team has been spectacular in the faceoff X so as long as Austin Sims is shooting the ball like he did against Hopkins and Sowers is dishing like he usually does, give me the Tigers in that match up.

Notre Dame gets a bounce back win against Virginia after that heartbreaker against Denver last weekend. They’re too good to lose 2 in a row this year.

Denver at Ohio State is just going to be a test to see if Ohio State is actually any good or not. Denver comes out of there with a win but if Ohio State can cover the 3 goals then maybe they’re legitimate. There’s a reason why they’re 8-0 and only ranked #18. Wins over Furman and Detroit Mercy and Jacksonville and Bellarmine and Cleveland State do nothing. That win over Towson earlier this week was nice but the weather turned that into a toss up match.

Finally, we have Hopkins vs Syracuse. 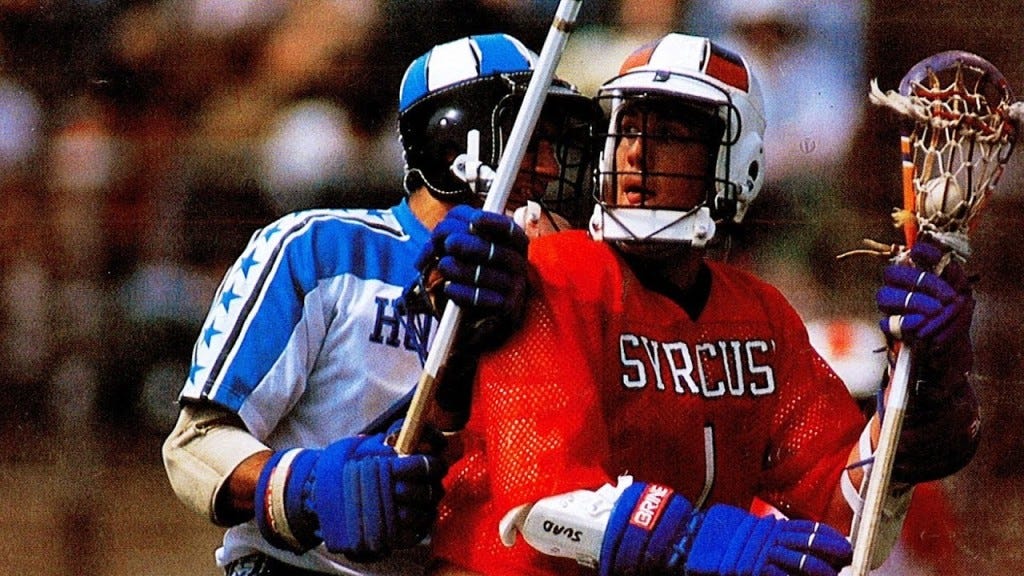 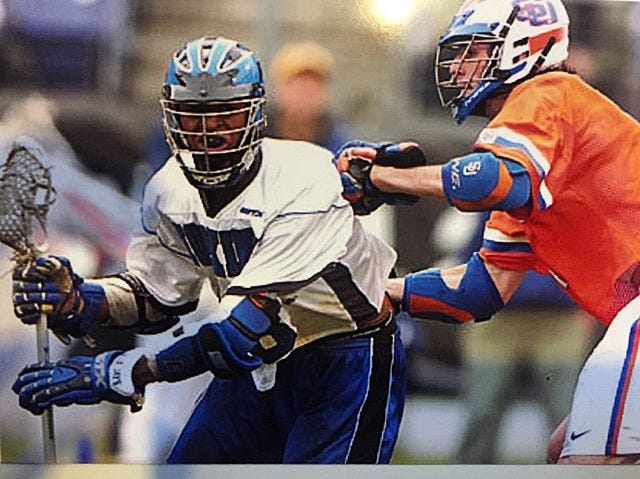 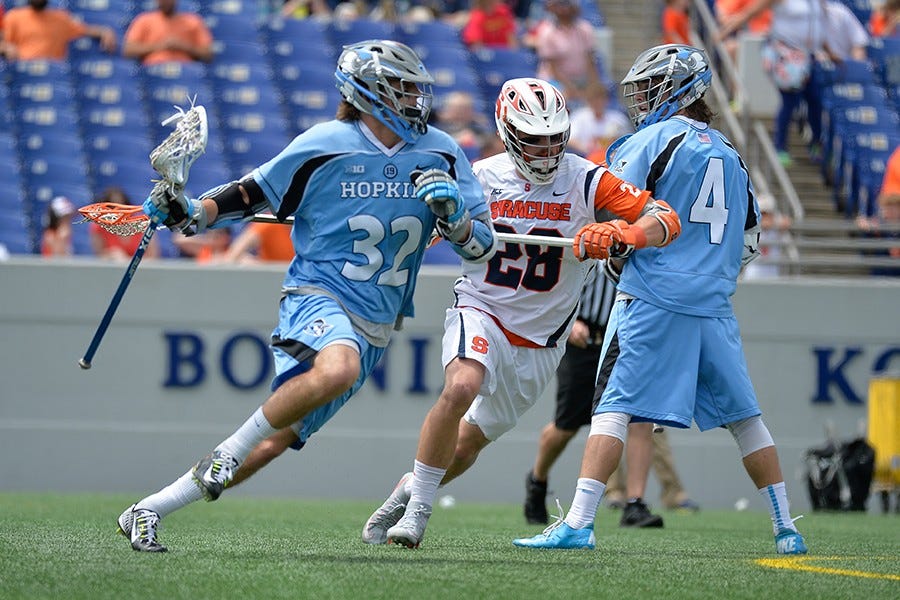 Between the 2 of them, there are 19 NCAA Championships since 1971. Cuse has 10 and Hopkins have 9. They’ve met in the National Championship game 5 times before with Cuse leading that match up 3-2. Over the last 10 years, Syracuse is 7-3 vs Hopkins but Hopkins is coming off an 11-10 overtime win against the Orange last season. I guess that 13-5 win over UNC is what makes Hopkins the favorite in this matchup but 1-goal line is right on the money for Syracuse. Their last 4 games have been 1-goal games with wins over Albany, Virginia and St. John’s and a loss to Army. Hopkins vs Syracuse is one of the best rivalries this sport has to offer. I think I have to go with Syracuse in this one just because they’ve already won a huge rivalry game at home vs Virginia and Sergio Salcido has proven himself to be clutch as fuck (that’s a scientific term for “very good when the pressure is on”). Plus I think Syracuse wins the faceoff battle and gets more possession. So yeah, I’m going with Cuse which means Hopkins probably comes out of this one on top.

So I know technically that’s 2 pushes, a bad loss and a Did Not Play. But I’m counting pushes as wins here so sue me. Anyway, this week’s picks will be….

Quick shoutout to CaptainCons of Zero Blog Thirty fame with that Army pick. Black Knights are 6-1 on the season. Didn’t cover last week against Lehigh but playing some damn fine ball this year. Hopefully this doesn’t mush them against Holy Cross or else I think Connor will murder me.

Thanks a lot for stopping by, guys. I know that was a fuck ton of words for a Friday afternoon but hopefully you could pick and choose what you wanted to read/ignore. If you have any suggestions on how you’d rather see this post formatted for future weeks, just let me know. I’m usually open to constructive criticism as long as you’re not a cock sucker about it.