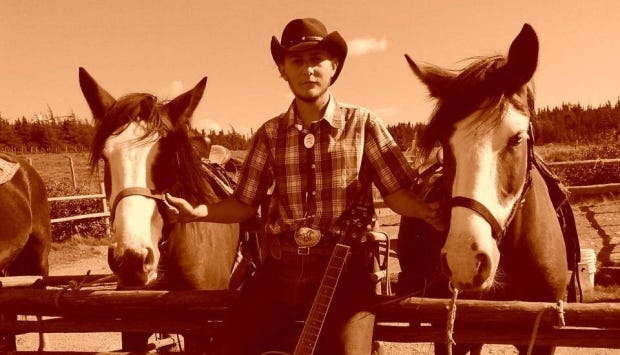 Carbonear resident Josh Chubbs, 23, was charged on Feb. 20 under the Medical Act after a mother — whom CBC News has agreed not to identify — called police to report that he had written to her last December, after she made a routine post on Facebook that mentioned her children.

The mother, who lives in the Conception Bay North area, said Chubbs wrote to her to inquire whether her son, who is under 10, was having any issues with his genitals, such as infections that might require a medical procedure like a circumcision or a frenulectomy, which involves the removal of tissue around the head of the penis.

“To say the conversation took a strange turn is a bit of an understatement,” she told CBC News. According to Facebook messages seen by CBC News, Chubbs asked if her son had been circumcised, how he cleaned his penis and several other questions that she felt were inappropriate.

Before we get started, the horses pictured in the photo did nothing wrong and are indeed good boys.

I appreciate a good bill of dick health more than anyone. I love it when my penis is clean as a whistle. I want that sucker to be so clean you could eat off of it. That’s a common desire. No one wants a dirty dick. This story isn’t about the sanitary levels of penises the world over. It’s about ethics in circumcision. It’s about society. It’s about valuing medical degrees.

When it comes to to circumcision, there’s basically two schools of thought. Some will say that it’s actually good.

while others will say that it’s actually bad.

These stories about unlicensed circumcisions inside of cabins in the woods are popping up all over the place so let’s establish some warning signs for pediatric dick weirdness. I never thought I would have to write these unwritten rules, but 50 sets of parents fell for the ole circumcision in the cabin trick so here goes.

You should stop medical conversations:

So parents, make sure your children have good genital health. Just take them to a normal doctor to get it done and not some Canadian cabin in the wilderness.