(warning: there is some NSFW here with a doctor’s exam at 4:00 and especially at the end when you get to the Vagina Slicing Hour) 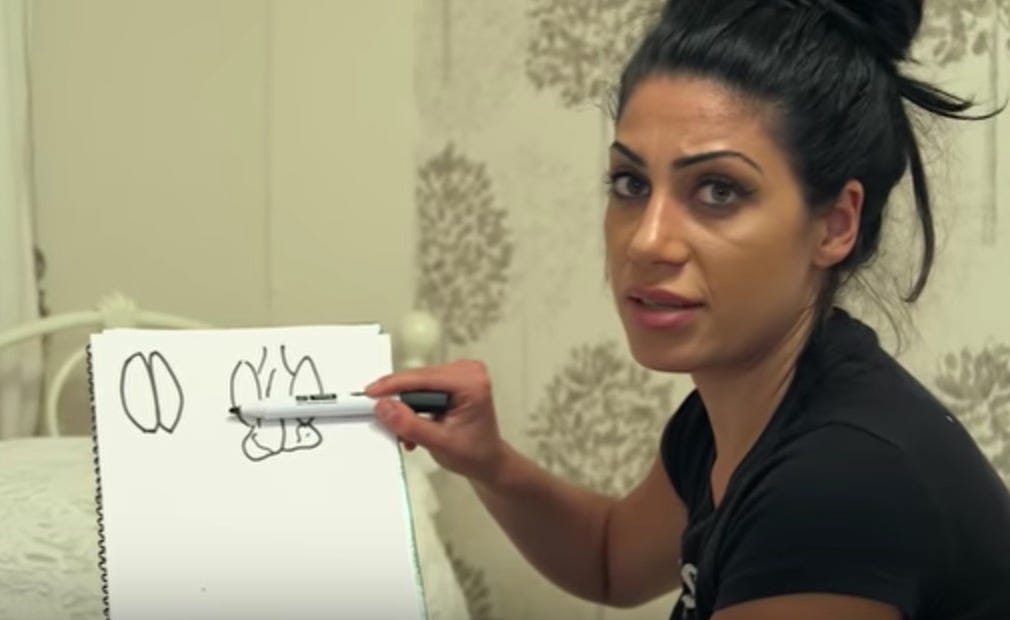 Lad Bible – Antonia, who described her own genitalia as looking like a ‘Big Mac burger with the filling hanging out’, says she has been tormented by men after they saw it [so she appeared on the BBC Three show My Unusual Vagina to get surgery].

Unfortunately she didn’t feel comfortable with her vagina, and so avoided having sex due to feeling anxious about it, as well as it hurting her physically.

“The skin flaps are like elastic bands, if I was to pull them I could get them down to my thigh,” she said. “For me sex is difficult, because it can hurt and feel uncomfortable.”

She decided that she’d spend £3,100 on a private clinic as the NHS wouldn’t provide surgery, despite her enlarged labia causing her swelling and discomfort.

Though the price is a big amount, it seems justified given her feelings of insecurity towards her private parts. In the past she’d received comments such as ‘I can’t wait to sleep with someone with a normal vagina’ and ‘you’ve got a pair of balls’.

Now I’m no woman but I have to imagine hearing “You’ve got a pair of balls” has to be a slight dent to a gal’s ego, not great pillowtalk. And honestly I am sympathetic to it. I’ve hung out with a couple girls who had shall we say prominent labia and I feel like across the board chicks are always so insecure about it. And that’s with just a hint of extra dangling roast beef, not the dollar menu that poor Antonia was apparently working with. I have to question how bad exactly it is given some of the Kosher deli explosions I’ve seen in the MILF category on Spankbang that apparently have no problem trotting a vag out there. But if it’s something where she’s uncomfortable about, of course she should go under the knife for a little snizz snip snip.

I mean could you imagine how rattled you’d be about your dick if it were compared by multiple people to unflattering food items or a woman’s genitals? That’s some real “repress these memories and don’t talk to anyone again shit.” And here Antonia is, trotting out two all beef patties special sauce cheese pickles onions on a sesame seed bun out on international TV pouring her heart out and wanting to make her life better. I can’t hate on that. I hope after her procedure she’s feeling more comfortable, fresh, and with a vagina closer to resembling a negligent Arby employee’s handiwork than any fast food it did before. The world is her vagina’s oyster now.